Flick of the Week: “What do you mean I'm funny?”

This week’s Flick of the Week takes us with Samuel L Jackson from his role a hit man in Pulp Fiction to his small role in the Martin Scorsese masterpiece – Goodfellas. Jackson’s role is small and ends badly, but it was the start of a pretty good decade for him – he would pick up significant supporting roles in Patriot Games, Jurassic Park and True Romance, before breaking out of the “oh he’s that guy from” roles with Pulp Fiction. I think we can safely say that when he was playing this small role, he would not have been thinking he would be the guy to get a starring role in the Star Wars films (were he at that point thinking George Lucas might make another Star Wars film). In this film he has a couple lines, and then gets shot by Joe Pesci.

First off let’s deal with the Oscar issue. Here were the films nominated for Best Picture in 1990

Who in their right mind would now ever think to put Ghost in a list with Goodfellas? Who in their right mind now would ever put Dances with Wolves above Goodfellas? Now I actually don’t mind Dance with Wolves – I think it goes on a might too long, but I recall enjoying it mightily when it came out, and there are worse films you could be forced to watch. But better than Goodfellas? Please. Truly one of the worst choices made by the Academy – somewhat understandable at the time – given the big hoopla about Costner over coming the odds and making a successful western. But geez. Then again they weren’t alone – the Director’s Guild of America, for crying out loud, gave their Best Director Award to Costner! 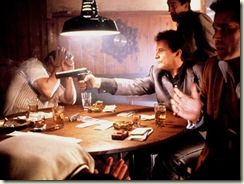 There is one other gangster film that was ignored by the Academy that year – the Coen brothers’ Miller’s Crossing. It is a very different type of gangster film to either Goodfellas or The Godfather III, but I would rate it second only to Goodfellas as Best Film in 1990.

So what is it about this story of mob guy Henry Hill that makes such great viewing? There are so many great things, but for me, the first time I saw it, I just knew from the great opening line of "As far back as I could remember I've always wanted to be a gangster" that I was about to see a great film. There’s just something so indefinably wonderful about knowing from the opening minute of a film that you’re in safe hands. Most of this credit has to go the Scorsese – his direction is amazing – from the long shots to the use of music, the pacing of the film is amazing. The last 20 minutes involving Henry Hill being paranoid about being trailed by the police is pure cinema adrenalin. (He of course lost the Best Directing Oscar to Kevin Costner – that must still hurt.) 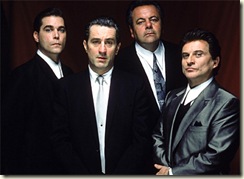 Does the story glamorize the mob? Not at all – there’s not really anyone who is at likeable here – interesting yes, but you know that they would as soon kill you as they would smile with you, and there’s not a hell of a lot of honour among these thieves.

The actual story leaves out quite a lot of Henry Hill’s life – for example the fact that he served in the 82 Airborne for three years – but what is left in is sensational. Unlike The Godfather movies, this one is set well below the top level mafia – Henry Hill was a soldier in the mafia, and so this film has none of the family motif that pervades The Godfather films. Hill is a worker – his job pays well, has lots of fringe benefits, and also is very dangerous involving very dangerous people. The interest for the viewer is of course to see this world most of us would never come into contact with. Since The Sopranos, the novelty of seeing how wiseguys operate is largely gone, but the breadth of time covered by Goodfellas makes for fascinating watching as we see Hill’s rise and fall. 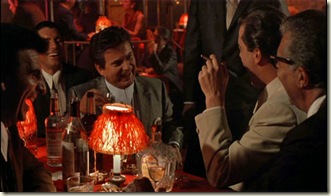 The acting is superb. Ray Liotta is so good, that he’ll never be able do anything that will shake the impression in viewers that he is Henry Hill. Robert De Niro as Jimmy Conway gives one of his last great roles (yes, sigh it is now 20 years ago), and Lorraine Bracco is excellent as Hill’s wife Karen. It was great to see such a strong female role in a mafia film – unlike Kaye in The Godfather movies, Karen is no naive outsider; in the end she is up to her armpits in cocaine along with Henry. But of course the film is stolen by Joe Pesci as Tommy. Pesci won the film’s only Academy Award, and it was certainly deserved. His “what do you mean, I’m funny” speech is outstanding – you know he’s only acting, and yet you feel he might very well kill everyone in the room, just for the fun of it.

Pesci at the time was going through an absolute golden run of supporting roles – in 1989 he was Leo Getz in Lethal Weapon 2, in 1990 as well he was Harry the crook in Home Alone, the next year he played David Ferrie in Oliver Stone’s JFK, then in 1992 he was Vinny in My Cousin Vinny. But here’s the weird thing: in 1998 he reprised the role of Leo Getz in Lethal Weapon 4, and then wasn't in another film till his old friend Robert De Niro gave him a role in the 2006 film The Good Shepherd. Eight years! And then he goes another four years without a film credit – he’s in two films this year. In this film one of the small characters he shoots is played by Samuel Jackson, and yet Jackson – the bit player than (the year before he played “Black Guy” in Sea of Love) is now a major star. All of which just goes to show that fame and the acting business are fickle.

The film at the time set a record for the must uses of the word f*ck (300 in 145 minutes), a record since bested by among other Scorsese’s gangster follow-up Casino. And no, it’s not a film for the squeamish – there is lots of violence. But damn, it’s great cinema. By the time the film is finished you feel like you’ve ridden a cinematic rollercoaster, and you know you’ve seen a true master working at the peak of his game.

Perhaps the most famous scene is the long shot of Henry taking Karen to dinner at the Copacabana . Thankfully it’s on You Tube – and this version is preceded by an excellent short discussion of the shot by the cinematographer, Michael Ballhaus. It is this type of shot that elevates Goodfellas above the pack, and into the very top echelon of films. Genius. 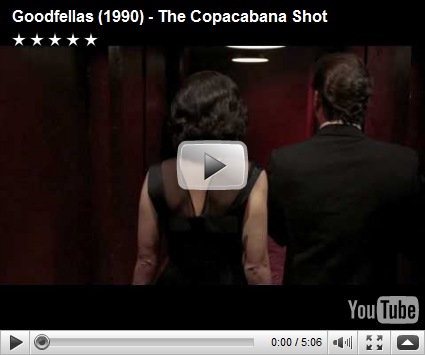