Flick of the Week: Who ever heard of a bank robbers escaping on a plane with fifty hostages? 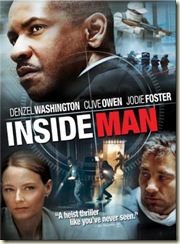 The last Flick of the Week post I did was back on (ahem) 27 June, which makes this the most overdue one of these posts I’ve ever done. For those who have only been reading this blog for a few weeks, the premise is that I link from one movie to another by way of a member of the cast or crew. I started with North By Northwest; 41 films later I was at Gosford Park. They are meant to be done once a week – they never are. But Flick of the Week sounds better than “Flick of the whenever I get around to it”.  This week’s Flick of the Week takes us with Clive Owen, who played the butler who did it in Robert Altman’s Gosford Park to his role as super bank robber, Dalton Russell in Spike Lee’s most commercially successful film, Inside Man.

When this film was made, Owen was in the middle of a period where he was jumping to, if not the A List, at least to the “this guy makes every film better” list. He also seemed to be in just about every film at the time. He was certainly one of the hardest working stars going around. 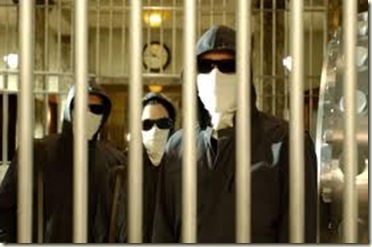 One of the good things about Clive Owen is that going in you know you are going to be treated like an adult. His films are not for teenagers. They may have elements of action in them, but these are not comic book movies – the closest he gets is the graphic novelesque Sin City. His characters are men. Perhaps only George Clooney’s characters are as manly – not in a muscle bound sense, but in a these guys have put away childish things sense. Like Clooney (and their forebears like Cary Grant and Bogart) they exude so much charisma, they let everyone know they are the star just by walking across the screen. Owen spends much of the film wearing a mask and glasses, and yet his performance is not hindered in any way.

Inside Man had Owen surrounded by actors – and a director – who also make movies for adults.  Denzel Washington, Jodie Foster will never be battling transformers (if we forget Washington’s role in Virtuosity) and Spike Lee has never been called the African-American Michael Bay. Lee’s films have an edge and sensibility to them that virtually repels the mass teenage audience, but here at least he took on a conventional film almost you think just to show Hollywood he can do it.

The story, written by Russell Gewitz (who has gone on to write only one other film – Righteous Kill) involves Owen as bank robber Dalton Russell. The film is mostly told in flashback as we see Russell and his gang take a group of people hostage, and Washington as Detective Keith Frasier is called in to negotiate. 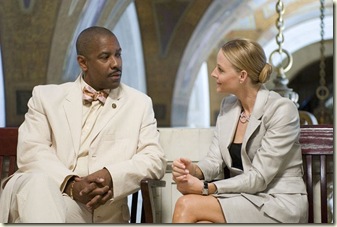 Washington as Frasier is attired like some postmodern mesh of a 1940s noir film detective by way of the 1970s.

The 1970s vibe runs through the film both in look and also from the explicit reference to Sidney Lumet’s bank hostage classic, Dog Day Afternoon, and the narrative which harkens somewhat to The Marathon Man.

The film in essence is a caper film, and like all good films of this type, the joy is not in the goal but watching them get there. I have watched this quite a few times on DVD, and though I know the ending, I am perfectly content to watch Owen and Washington match wits, and chewing some fun dialogue:

The essential element of a good caper film is that you like the bad guy; and Russell certainly fits that bill. He belongs in that glorious gallery of rogues who you forget are actually breaking the law – such as Clooney’s Jack Foley in Out of Sight. The plan is also a good one – devilishly good in fact. It took me a good three viewings before I was able to grasp who were all the bad guys, but even now I struggle to pick them – so many red herrings does Lee throw at the audience to put them off.

The narrative structure is quite complex – the entire is a flashback, but within it are flash forwards of Washington interviewing suspects. It means you have to pay attention (a sure sign you’re watching a film made for adults). 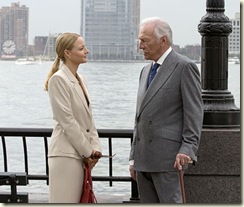 It also features a secondary narrative which (of course) becomes intertwined with the primary bank robbery one. This narrative involves Christopher Plummer, as the owner of the bank being robbed, and Jodie Foster in the role of a Ms Fix-it (the kind of role that would be played by Harvey Keitel in a Tarantino film). Foster, I have to say, steals the movie from the guys. As “Miss White” she lives up to her name – dressed in white suits, blonde hair pulled back tightly, and exuding an almost sub-zero coolness. And she does this all the while walking around looking like she knows she could get every guy on the planet to do whatever she wants.

Her job is to ensure that Plummer’s secret about his involvement with the Nazis is not discovered (there is evidence in one of the bank’s safety deposit boxes). This is perhaps the only flaw in the film – not because the storyline is poor, but because the maths is starting to get too hard. This film surely should mark the end of any modern day story involving a Nazi or Nazi sympathiser. Given that a 20 year old in 1945 would now be 85, it is starting to get a bit hard to feature such a character doing anything other than sitting in a retirement home wondering if he should fess up to what he did 65 odd years ago.

But putting that to one side, the storyline adds a nice depth to the usual caper film denouement of “how will they get away”.

The film is most certainly not deep – despite Lee’s attempts to make a comments about New York’s interracial society post September 11, but geez it is fun – intelligent fun.

It is also one of those films that lets you know you’re in safe hands right from the get go. Owen has a great opening monologue, and then in cuts the sounds of “Chaiyya Chaiyya”. The music immediately sets the films apart from the run of the mill action/thriller.

Sure it’s not Chinatown, but it is definitely one of those films you wish they made a hell of a lot more of.

Here’s the great opening (sorry it does cut out at the end rather abruptly): 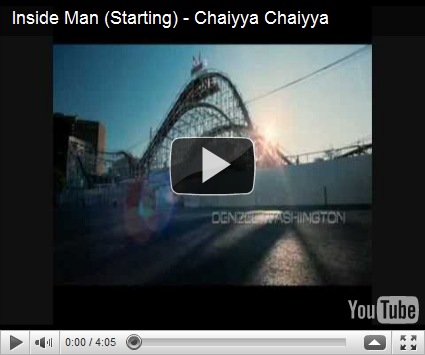 In an amazing dose of synchronicity, myself and Ms SM actually watched this for the first time on Saturday night. It was on a Clive Owen 3 movies in one package DVD I'd picked up a little while ago.

You are so right about Clive, he does those sort of roles so well, and being a Spike Lee film there was an emphasis on dialogue and the caper, not explosions and melodrama.

Rest assured we are going through some of your prior flicks for some DVD goodness.

Have you seen The Boys Are Back? Not even Clive Owen managed to save that thing. But Children of Men makes up for it and The International as well.

The Boys are Back was interesting... it never really knew what it wanted to be - a romantic comedy or a drama, and so ended up being neither and a bit odd.

Don't forget that it also tried to be the stupidest ghost story ever.

The brilliant flick Croupier, and acting (he must have needed rent money) in the computer game Privateer 2.

Privateer 2 is interesting, because of the amazing acting talent involved : Clive Owen, John Hurt, Jurgen Prochnow, Christopher Walken and Brian Blessed. I played the hell out of it in
1997-8.

I love this movie. It's one of those ones I always recommend for people when they just want to watch something 'fun'.

Reading through your list of Clive Owen's roles also highlighted for me that he's starred in so many of my top movies of the last 10 years. 'Closer' was brilliant at so many things, but mostly for the way it showed how fine the line truly is between love and hate. While I didn't enjoy 'Children of Men' as much, it's still a movie that touched a nerve.

Grog, I forgot to mention in my last comment and perhaps it's covered in the film (it's been a long time since I saw it) - why would Plummer's character hold onto the Nazi documents?

Also, it seems there has been on again/off again talk of Inside Man 2 being made. Not sure how I feel about that.

Brad - there isn't any real reason given why he would, other than poeple often cling on to things they're ashamed of or something.

Yeah Inside Man 2 gets mooted but it's dead which I think is good.

As SM above noted, we just watched this! He bought me the box set because I love Clive so much (and have done since well before his big A list films - when he was still just on TV).

I enjoyed the film but think I missed some of the stuff you've suggested was so good about it. If you've watched it three times and feel you got more out of it each time, I may just rewatch it to try and appreciate it more. And not just for Clive.

Thank God for grown up films, is all I can say though.