Flick of the week: “Nobody ever lies about being lonely”.

This week’s flick of the week (yes I realise it has been a while!) takes us with Burt Lancaster from his role as gossip columnist JJ Hunsecker in Sweet Smell of Success, to his role as Sgt Milton Warden in the multi Academy Award winning From Here to Eternity. 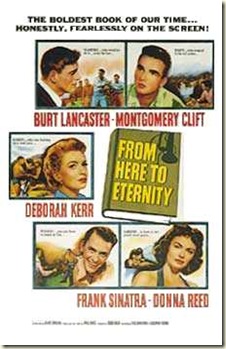 Lancaster is a star who really wasn’t that big a star, and yet he had a career most actors would kill for. From his first role in The Killers to his last notable role in a film – in Field of Dreams, there is 43 years of work in films like Sweet Smell of Success, Run Silent Run Deep, Gunfight at the OK Corral, The Rainmaker, Elmer Gantry, Judgement at Nurmeburg… and that only gets us to 1961. However, only once in his career was he listed in the Quigley Poll of Top 10 Money Making Stars. The poll has been going since 1932, and is a pretty good marker of who are the main draw cards to films. That such a giant of the film industry only was in the Top 10 once is rather bizarre given that even Paul Hogan was able to get listed twice in the 1980s.

The year Lancaster was in the top 10 was 1956 – the year in which he starred in Trapeze with Tony Curtis and The Rainmaker with Katherine Hepburn:

The next year he was in Sweet Smell of Success and Gunfight at the OK Corral, but he dropped out of the list – replaced by the likes of Rock Hudson, Pat Boone and Elvis Presley. So he was a guy who was as dependable as a rock (certainly more so than Hudson), but never really among the top stars – never really up there with say John Wayne. If he were an AFL player he’d be more the Tyson Edwards – 300 gamer, but no all-Australian appearances – rather than a Gary Ablett, Chris Judd or Andrew McLeod.

Which goes to prove that even when you combine Number 1 and 2 in the same film, it doesn’t mean it will be any good)

With Burt, you knew what you’d get: a guy who would not embarrass himself in the a scene with a great actor, and when in lesser films (eg Airport) he’d give the film some gravitas. Bugger the Quigley Poll – they guy was a giant, and he sits nicely in the Hollywood Hall of Fame – not top echelon maybe, but he would’ve got in on the first ballot. 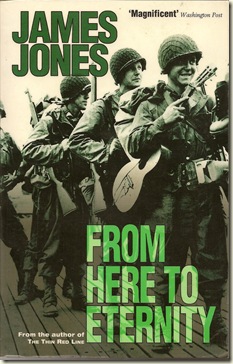 In From Here to Eternity he has notionally the lead role of Sgt Warden, who has a “torrid” affair (for the 1950s at least) with his commanding officer’s wife – Deborah Kerr. The film was an adaptation of what was seen to be an unfilmable book written by James Jones. Unfilmable because the book is pretty well replete with “Fuck” on every page, features homosexuality, brutal beatings in an Army stockade, a love affair with a prostitute, a useless officer whose incompetence is rewarded with a promotion, and a woman who is unable to have children because she caught gonorrhoea from her cheating husband, the useless officer. So yeah, that’ll play well in middle America!

Bear in mind as well, the film code in use at the time was pretty strict compared to now – and we’re talking relative to a code at the moment where The King’s Speech was rated R because is uses the F word too often.

How to fix this? Well the brothel and prostitutes become a club and girls who talk and dance with the men, the homosexuality is gone, so too the gonorrhoea, in place the wife is the one with a past, the officer now gets demoted, and the entire quarter of the novel that is set in the stockade is banished from the screen.

So yeah, “adaptation” is a very loose term.

It would be good to see the book given a proper adaptation, but I doubt even now it’d be done faithfully.

Given the changes it would have been easy for the film to have been a dud: luckily for us, the cast was brilliant.

Lancaster was perfectly cast as Sgt Warden. He looks like someone whom could be described, as he is in the film, as “the best soldier I ever saw”. He exudes about as much masculinity as anyone in the 1950s could, and the roll in the surf with Kerr – brief though it is – is among the most iconic Hollywood film images.

There’s also Frank Sinatra in his Oscar winning role of Angelo Maggio. Pretty much playing himself he resurrected his career. Prior to the film his career seemed over; afterwards he became Frank Sinatra, King of Hollywood, and leader of the Rat Pack.

The female roles are played by Kerr and Donna Reed both playing against their type as, respectively, the wife and the quasi- prostitute. Kerr is a bit matronly for the role of Karen Holmes – she doesn’t really strike me as someone for whom Warden would risk his career – she never quite seems the type to engage in this type of conversation with Warden:

Donna Reed though is excellent in her Oscar winning role as Alma 'Lorene' Burke, the girl who is pretending to be a society girl, but in fact comes from a poor upbringing, and who falls for the absurdly named Private Robert E Lee Prewitt, played by Montgomery Clift.

Lancaster and Kerr may have the iconic scene in the surf; Sinatra and Reed may have the Oscars, but this film is all Clift’s. The oft told story is that Lancaster was so intimidated by Clift’s screen presence that prior to their first scene together he was shaking with fear. True or not, it certainly is believable because Clift conveys an intensity that few other actors have ever been able to achieve on the screen.

His role is Pvt Prewett, the “thirty year man” who transfers from the bugle corps to the rifle company but whom refuses to box in the regiment boxing competition because he once blinded a guy in a fight.  As punishment the company boxers put him through the wringer (though in a much nicer way than in the book). His only escape is Lorene whom he goes AWOL to be live in a kind of pretend marriage, only to return to the unit when the Japanese attack Pearl Harbor.

Clift had an odd career. He turned down the lead role in Sunset Blvd, that was played by William Holden, the lead in High Noon played by Gary Cooper, the lead in Somebody Up Their Likes Me that gave Paul Newman his start, and also Dean Martin’s role in Rio Bravo. As an actor in the 1950s you could have done a lot worse than accept all the film role Clift turned down. Yet even without those roles, and with perhaps only 5 or 6 truly memorable roles, he remains an icon – perhaps an icon for tortured souls – to whit the beautiful REM song on their Automatic for the People album, “Monty Got a Raw Deal”.

He was the first method actor to arrive in Hollywood: he was in Red River and The Search in 1948 – Brando only appeared in a film in 1950. His personal life was dominated by drug addiction –exacerbated after a car crash in 1956 – and the usual facade needed to be observed by gay/bisexual actors at that time. His closest friend was Elizabeth Taylor, with whom he appeared in A Place in the Sun in 1951. He died early – at the age of 46, by which time it had been a good 6 years since he had done any acting of note. His career is the pure bright star – less than a decade of strong performances, but the type of actor other actors aspire to be.

His best performance is here as Prewitt, the bugler who loves the army although the army sure as hell doesn’t love him. Prewitt the “hardhead” who refuses to buckle under pressure. Prewitt, the guy who sticks up for his mate Maggio and who revenges his death by killing the sadistic Sgt “Fatso” Judson (played by Ernest Borgnine) in a knife fight. Prewitt, who flees the army to set up a love nest with Lorene, but whose loyalty to the army has him running back when war begins.

I watch the film really to just watch Clift. Quite often now I’ll fast forward the scenes with Lancaster and Kerr because they seem somewhat flat by comparison – almost like TV melodrama (though not quite). My favourite scene is this of Prewitt playing the bugle the night after Maggio’s death – he was beaten to death by Fatso while in the stockade. It shows that while Prewitt may have professed love to Lorene, his real bond was with his fellow soldiers and the men of the army – as Warden says at the end – he loved the army more than any soldier he knew. I love the way the other bugler looks at the bugle when Prewitt hands it back to him – as though he knows he’ll never play at that level.

This film also contains one of my favourite lines from The Simpsons. In the episode “Boy Scouts’n’ the Hood” where Ernest Borgnine appears as himself, he introduces himself to a group of boys:

the year in which he starred in Trapeze with Tony Cutis...

Greg, enjoyed your posting on From Here to Eternity very much. From roughly the same era is The World of Suzie Wong, a male fantasy if ever there was one, but with some delightful period charms nevertheless. Do you know it ? It deserves a posting of its own.
Clem

Good review.
I love Eternity, mainly because of Monty. Sinatra was on skid row before this film and Monty coached him to his oscar.
Monty was the only actor Brando feared. Dean was in awe of him.
He also turned down the lead roles in High Noon, East of Eden and On the Waterfront. Sunset Boulevard was written for him. He could have been the greatest actor in film history. Should have won at least two oscars in his short career - for this film or A Place in the Sun.
As was once said of Richard Burton I think - he threw away greatness like an old sock. A most fascinating man, tortured by so many things, most probably his homosexuality and his bizarre relationship with his mother.
THE best of the post war actors.