Inflation Rate: CPI 1.6 per cent (and the Phillips Curve)

The ABS released the first quarter inflation figures. The CPI annual figure is now down to 1.6%. That is seriously low. Actually it is a bit unrealistically low as the falls are due to massive drops in fruit and vegetables which had increased artificially because of floods and cyclones, to whit the seasonally adjusted CPI for the quarter is actually negative:
-0.2%.

So as everyone else does let’s look at the RBA’s weighted and trimmed means which flatten out all the big swings.

Both the weighted and trimmed means increased by more than did the CPI in the past quarter: 0.4% for the weighted, and 0.3% for the Trimmed. 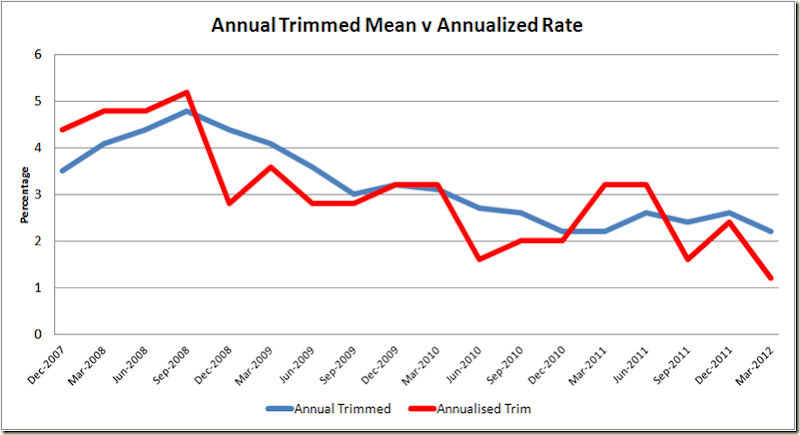 Since September 2008 inflation has been steadily falling. To get a sense of just how amazing this situation is lets have a look back over the past 35 years: 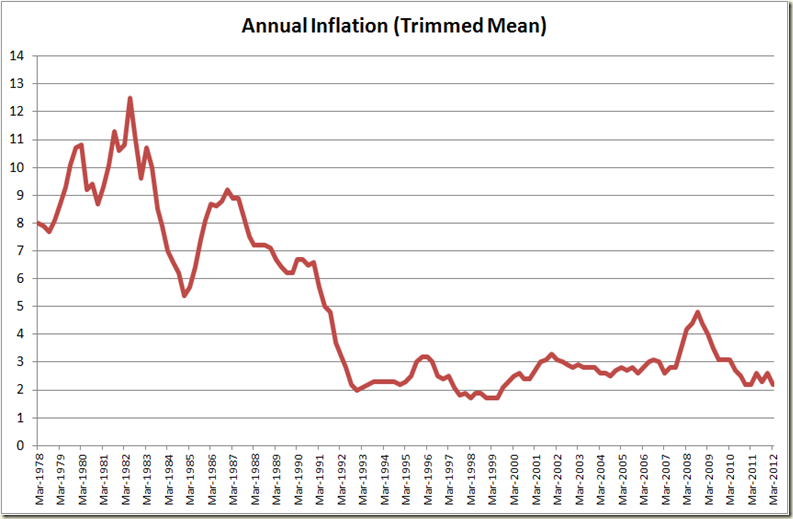 I find it quite hard to believe that someone who turns 21 this year has basically never known life with inflation above 4 per cent. It also shows just how well the RBA has done to keep inflation within the 2-3 per cent band.

I think the RBA could have dropped interest rates this month, but whenever you seek to criticise the RBA, you really need to have a look at this chart and realise they’ve done a pretty damn good job.  Incidentally the spike in late 2007-early 2008 shows Wayne Swan was right when he was saying the inflation genie was out of the bottle. I shudder to think where rates would have gone had the GFC not slapped the begeezus out of inflation.

The rate is now right down the bottom of the 2-3% band – so the extremely easy money is to bet that the RBA will drop rates in May. But will they drop them by 50 basis points? I would, mostly because the banks have been increasing rates since the RBA last moved in December, so a 25 basis point drop would not have as much impact as it normally would had banks not already increased their rates. Also I’m not a believer in dropping rates 25 point one month and another 25 points the following. Do it 50 in one go.

Interestingly here’s a chart of the cash rate above inflation over the past 20 years: 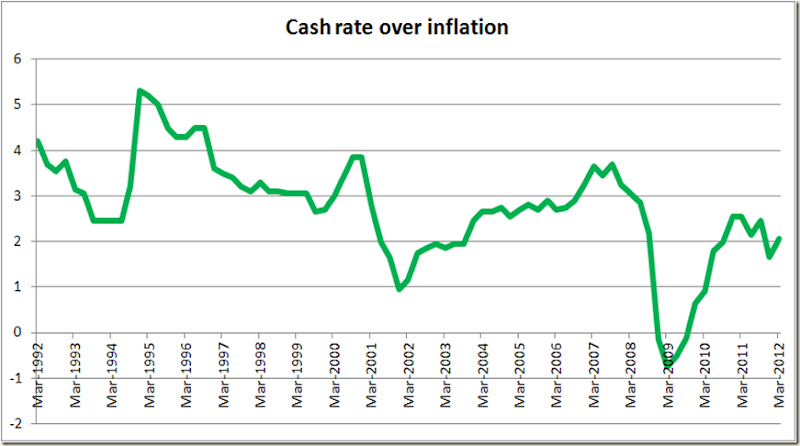 The cash rate is now just 2.05 percentage points higher than the annual inflation rate – at level below the 20 year average difference of 2.74 percentage points. So you would only think the RBA would drop rates if it feels that it needs to to help growth. I think they do think that.

The rest of the post is a bit “wonkish” So if you are not all that fond of economic theory type stuff, no need to read on

What it did was show that unemployment wasn’t the only determinant of current inflation; expected future inflation is also crucial. 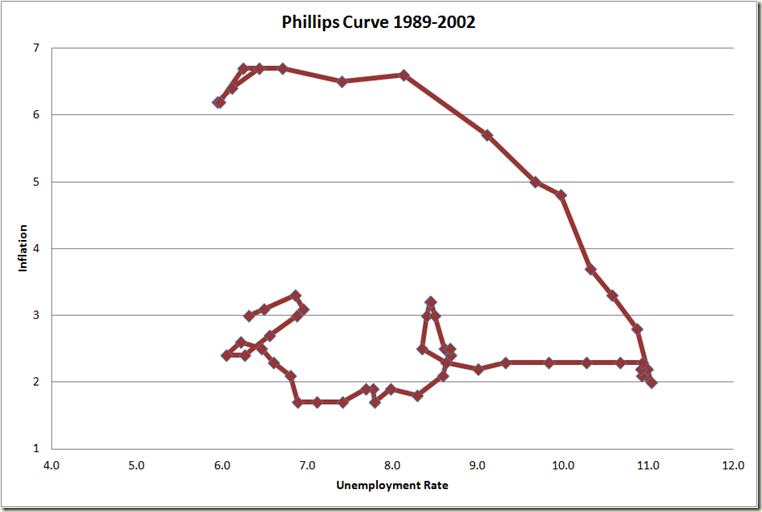 What was interesting however is that during the 2000s for most of the time the Phillips Curve relationship didn’t really happen: 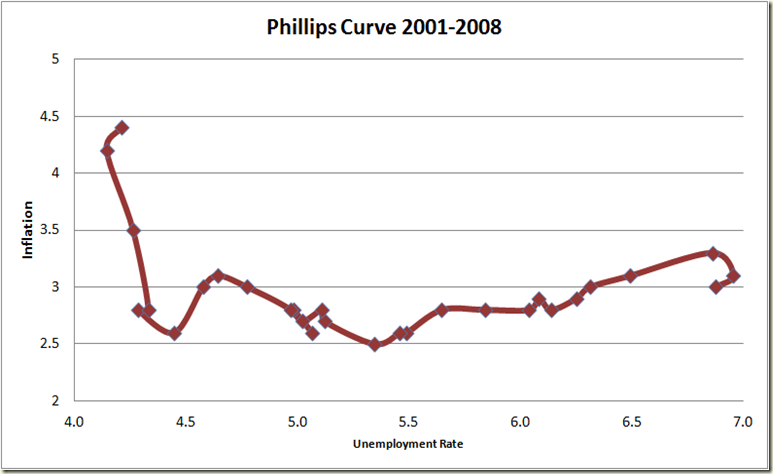 For much of the 2000s, inflation (as we saw in the first graph) stayed low and unemployment declined (the starting point on this graph is the bottom-right when unemployment was around 7 per cent). You can credit the RBA or you can credit John Howard and Peter Costello, but you can’t credit the Liberal Party’s IR shift, because the the period when inflation started going back up was after Work Choice had come in. So by the time the ALP was elected in 2007 unemployment had hit a wall and inflation was going up – and going up dramatically (cue much talk about the non-accelerating inflation rate of unemployment – or NAIRU)

Then the GFC happened and now let’s see what has happened on the Phillips Curve: 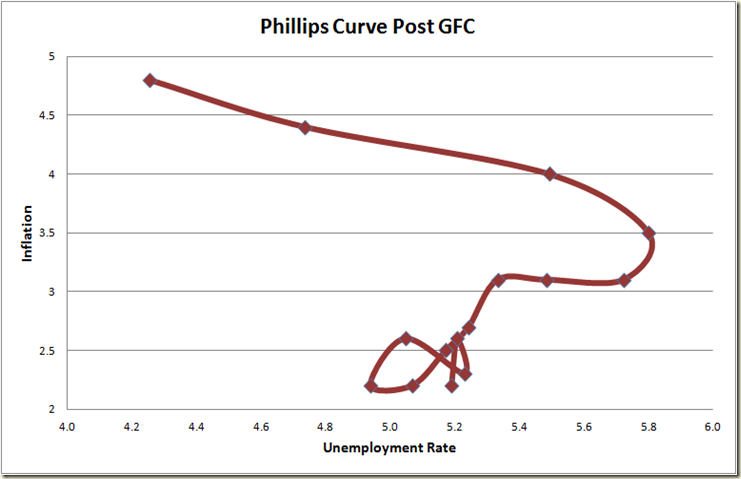 We start our journey at the top left with unemployment at 4.2% and inflation at around 4.7%. When the GFC hit we again slid down the Phillips Curve just like in the 1990s. And from when unemployment peaked at 5.8% the clockwise motion began again. Except in the past few quarters it seems to have got stuck – with unemployment staying around 5.1-5.2%. The question is will unemployment fall and inflation stay mostly flat as happened in the 2000s?

Clearly if the RBA does drop rates that will hopefully lead to a drop in the unemployment rate as more firms invest, people buy homes etc etc. If that occurs it is likely inflation may increase, but given the budget is going back into surplus there won;t be much supply side pressure coming from the Government (especially as everyone agree the private sector is still a bit punch-drunk after the GFC). Wayne Swan and Julie Gillard are hopping for the Phillips Curve to stay horizontal and the unemployment rate to drop .

The answer to what may happen could be to look at what has happened since 2005 when the unemployment rate was roughly the same as now at 5.1% and inflation was a touch higher at 2.6%: 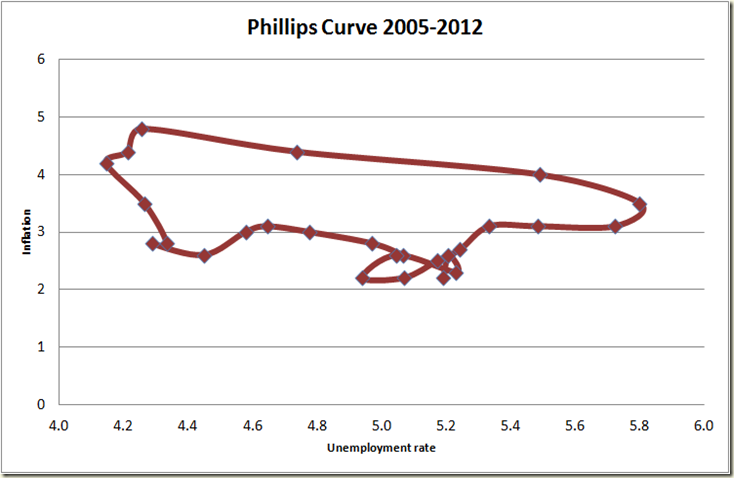 I'm dizzy after all that.

interesting and informative but I feel that it was without a point (to make). It leaves me wondering if you are attempting to develop a descriptive / analytical tool OR to develop something which can be used to predict. The latter is after all one of the key objectives of science.

Perhaps it was just fleshing out evidence to support a 'form' of the Phillips curve.

I felt your writing style set up at the beginning to perhaps suggest that you doubted the inflation figures, but then (perhaps I missed it) you didn't seem to go back to that. Perhaps I mis-interpreted it.

None the less it was interesting to see that you found it went in cycles. I'm a big fan of the observation that things tend to operate in simple harmonic motion (one way or another)

I always find your writings on economics interesting, mainly because you make it accessible to wonks and non-wonks alike.

The only thing I feel I need to point out (because I think I've read it in your writing previously and I'm a pedant who likes pointing out these things) is that 'whit' means small, iota, to wit, not one whit of difference.

See what I did there?

obakesan, I don't doubt the inflation figures, re the Phillips curve, the point I am trying to make is that (like Krugman) when the inflation falls after a downturn the inflation expectations also fall and thus the curve shifts inwards.

What will happen now? I'm not sure it will shift in much further, my view is that if unemployment drops below 5% inflation will rise slightly, and likely go along the line that occurred in 2005-07