The reason? Well as anyone who has noticed graphs like those here, here, here and here would have known that the economy is not running above trend, and the latest inflation figures (which it should be noted referred to Jan-March, so are a bit of a lag) showed inflation was not of great concern.

Also banks are crying poor and saying funding costs are killing them so it is likely they won’t drop them by the full amount, so the RBA obviously believes to get the banks to drop rates by the amount they really want, they needed to go 50 basis points rather than just 25.

The RBA notes did however contain this nice line:

At the margin, wholesale funding costs have declined over recent months,

But don’t worry, banks won’t drop rates b the full amount, and the reason they won’t is because they don’t have to.

So let’s have a look at the graphs: 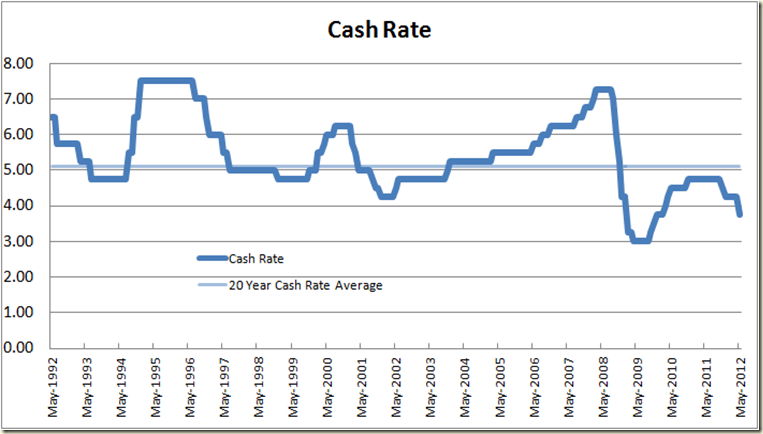 The 20 year average for the cash rate is 5.1%. The Howard Government average was 5.4%. But how is it going in the real world? 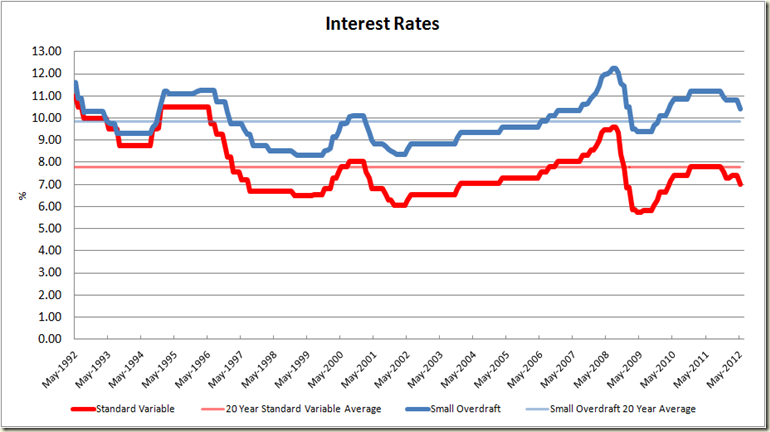 I have factored in banks dropping their rates by 40 basis points (this might be generous). On this score it would get the average standard variable home loan to 7%. The 20 years average for such rates is 7.8% (the Howard Govt average was 7.26%). Where life is less good is for small businesses and the rates for small overdrafts Even a 40 basis point drop on this would only get such rates to 10.4% above the 20 year average of 9.85% and also the Howard Govt’s average of 9.36%. The reason why despite the cash rate being at such lows, the mortgage and small business overdraft rates not being so historically low? The below graph shows: 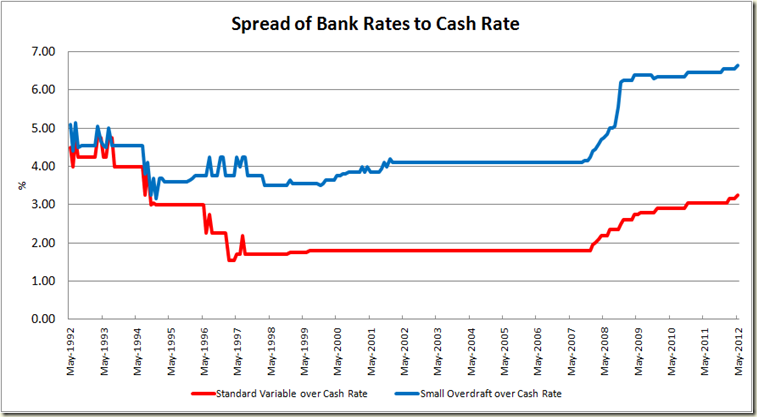 While the spread of home loans to the cash rate is now up around where it was in 1994-95, the small; overdraft spread is nearly 2 percentage points higher than it ever has been in the past 20 years.

And note as well if the banks don’t drop rates by the 50 basis points, this spread increases.

Also there’s been a lot of talk about the budget and interest rates. Joe Hockey laughably suggested because the RBA notes didn’t mention the proposed surplus that showed that it had nothing to do with. Others (like Abbott and Hockey) are suggesting that those who think a surplus will allow for lower rates are going against what was said during the GFC. Abbott is even suggesting that Swan and Gillard saying such things shows that they were wrong during the GFC.

Well geez, Tony, let me walk you through it. During the GFC both monetary and fiscal policy were pumping the economy. As everyone knew then, if there had been less fiscal stimulus there would have needed to be more monetary stimulus (ie lower rates). No one disputed this. What they did dispute was whether this was a good thing (RBA chief Glenn Stevens was one who suggested lower rates would not necessarily be good policy). You only need to see the near zero rate in the USA, Japan and UK to see that rock bottom interest rates don’t correlate all that well with strong GDP growth.

This time round, the Government has decided that growth while below trend is not in danger over going negative, and thus had decided to leave the pumping of the economy to the RBA, and thus interest rates fell. If the Government had been flagging another deficit – say 1% of GDP, then I doubt very much if the RBA would have dropped rates. They would likely have seen what type of a deficit was being run – ie one aimed at increasing consumer spending or one aimed at areas such as infrastructure.

Some economists (and commentators) think the Govt should be doing its bit and using the fiscal lever to pump the economy as well. That’s fine, but you can’t criticise the Government for returning to surplus and also criticise it for running an economy where interest rates are being cut. It is not a sign (as Hockey would have you) that the Government has lost control of the economy, it is actually a sign the things are happening as the Government is hoping they will happen.

It is still a bet though whether it will work. Interest rate drops can take a while to improve growth in the economy, and if it doesn't you can sure bet the opposition will conveniently forget it too is in love with a budget surplus.

Low unemployment and low inflation. If that is the Government losing control of the economy, then Joe Hockey really needs to have a lie down, because reality is getting too much for him.

The margin indicates the banking cream is getting more and more with every rate cut.

No wonder they call them fat cats.

I think the banks have actually pushed the RBA to go for the higher drop. They have managed customer expectation perfectly and forced the RBA to add the extra sweetener just so the banks will drop their rates enough to suit the real RBA target.

stephenwho - Christopher Joye said much the same thing back when the ANZ lifted rates - suggesting doing so would get the RBA to drop rates by a bigger amount. This in turn lets banks just cut by a bit less than the RBA has, and thus keep that margin nice and fat.

Of course banks try to make as much profit as they can. So does your local butcher, and TV station, and shoe repairman, and plumber, and most other businesses. This is not a bad thing. Need I quote Adam Smith on the benevolence of the butcher & baker? Do you really think that bank investors (ie your super fund) are in the philanthropy business?

On using fiscal or monetary policy, it is important to remember that they both work through the expansion of broad money supply. Monetary policy puts that money in the hands of borrowers while fiscal policy has the money spent on hack political schemes. We can pretend there is a debate if it makes some proto-Keynesians happy, but I think we all know which works better.

Not to mention the inevitable >50% crowding out you get by having a small open economy with a floating exchange rate. This *fact* is something that many economic writers forget to mention... so often that I'm beginning to think they are unaware of IS-LM-BP. I heard a worrying anecdote from the Commonwealth Treasury where somebody was wondering the isles asking the "fiscal policy gurus" how they responded to the IS-LM-BP standard story, and most responded by saying they hadn't heard of it. Scary stuff. But don't worry... at least they wear expensive suits. :/

[Hacker has just had a stormy cabinet meeting over a sudden financial crisis.]
Hacker: Bernard, Humphrey should have seen this coming and warned me.
Bernard: I don't think Sir Humphrey understands economics, Prime Minister; he did read Classics, you know.
Hacker: What about Sir Frank? He's head of the Treasury!
Bernard: Well I'm afraid he's at an even greater disadvantage in understanding economics: he's an economist.