My Drum post looks at talk about how the IR legislation is now too pro-union.

It’s an old issue. One that crops up every 2-3 months whenever any data is released that can somehow be shoehorned into conforming to the narrative. Mostly it involves things like suggesting strikes by state public service workers not covered by the Fair Work Act are signs that the Fair Work Act isn’t working.

Last week we had business groups suggesting Labor’s IR policies are too pro-business. John Howard even chipped in to say as much (yeah I know, I’ll give you a moment to let you pick your jaw up from off the floor). It is worth remembering that back in 2007 these type of business groups were among those funding adverts under the “National Business Action Fund”. You remember – those calm, fact-based adverts such as:

So let’s not pretend that these groups are some middle of the sphere, no bias-detected groups who only care about the economy of Australia. They’re unions for businesses and as such they advocate their policies as do labour unions. Oddly however, The Oz and the AFR seem to report the two types of unions differently. I would almost think it has something to do with their readership. But that would be wrong given newspapers just report facts and betray no bias at all.

The entire reason IR is considered a big issue is because of productivity. The problem is most commentary on productivity is bollocks. And we gets things like was reported today:

Companies do more with less: survey

Now before we go further I’ll just let you know that the survey being reported was done by Robert Half, a recruitment services company. OK. let’s continue:

Many companies are improving productivity by making greater demands on workers without providing additional resources, a survey has found.
…

A third of the 300 who participated said hiring additional temporary staff had improved productivity.

"In the current financial climate, driving existing employees to be more productive is a cost-effective solution," Robert Half Australia director Andrew Brushfield said on Tuesday.

Output is not productivity. The only way increased hours could lead to increased productivity is if you don’t count those extra hours when you are working out your level of productivity (something which Matt Cowgill reminded me is what John Quiggin thinks might have occurred during the 1990s and thus led to Australia’s increase productivity levels) .

Anyhoo here’s the picture of why people are concerned about productivity: 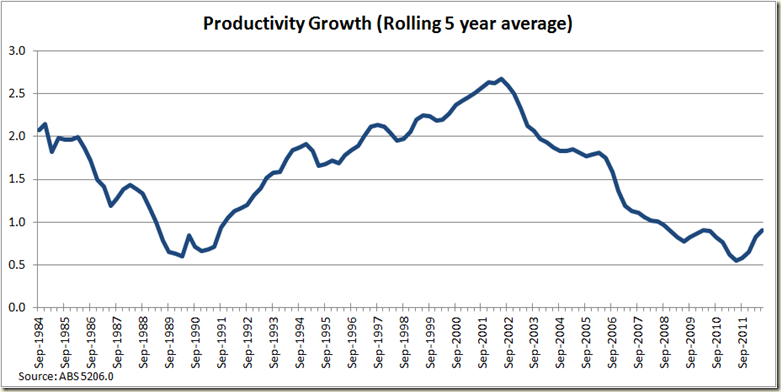 I’ve used a rolling 5 year average because the annual rate jumps up and down a fair bit and this gives a much smoother picture – without distorting the issue.

Now something happened around 2002 that sent productivity downwards. One reason (in my opinion) is that the mining boom led to more unproductive mines being worked which due to the increase in minerals prices were now profitable.

You only need to look at the “multi-factor productivity” (which looks at both labour and capital productivity together) in the mining sector to see why I might think this: 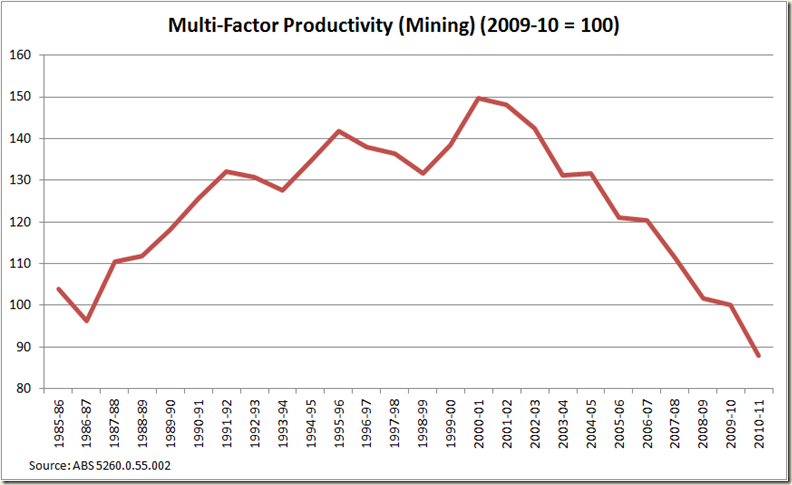 If the mining boom helped spark our GDP growth it also certainly helped drive our decline in productivity growth.

Anyhoo the talk last week about IR rather oddly ignored the latest Wages Price Index data that was also released last week. I wrote about that here so you can go there to find all the graphs. But I’ll show a couple graphs that I didn’t have room for in my Drum piece.

Firstly in my Drum piece I quoted Terry McCrann saying:

The June-quarter numbers showed private sector wages rose a tick under 4 per cent over the year.

While previously that number would not have sparked concern, it now does. The reason is low productivity. If productivity is around 1 per cent, 4 per cent wages growth threatens the 3 per cent inflation ceiling.

Now that’s a good point, but it was odd that McCrann didn’t point out that for the last 5 years of the Howard Govt productivity was running at around 1% and yet wages growth was above what it is now, which suggests that when he is saying “previously that number would not have sparked concern” he is referring to a time he seems somewhat disinclined to actually state. 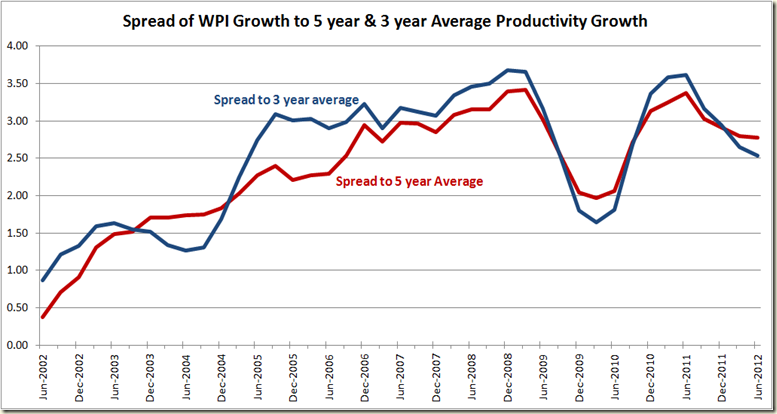 So you can see once the mining boom took hold the spread of wages growth over productivity growth increased sharply (this is accentuated with the 3 year average).

You can see why when you look at both the WPI and Productivity on the same graph. From 2002- 2005 wages growth increased, while productivity growth decreased: 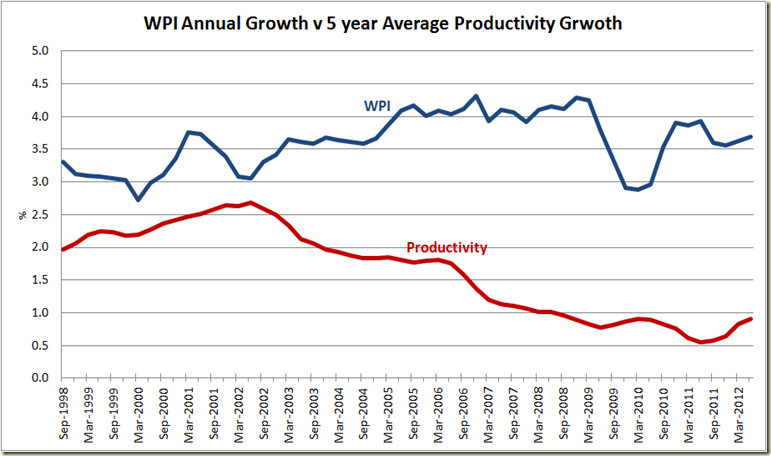 After 2005 productivity growth continued to decrease but wages growth stayed flat. So by 2006-2007 (depending on which average you use) the gap was greater that 3 percentage points – Terry McCrann’s danger zone.

Not counting the GFC – which killed wages growth, the spread between wages growth and the 3 year average is now smaller than any time since 2004.

Hardly a sign of IR legislation that isn’t working.

One other aspect is Real Unit Labour Costs. These have been rising of late and have been used to demonstrate that the IR picture is horrible. in my Drum piece I noted the abnormally low GDP deflator number of late that have caused the RULC to increase.

But one other aspect about the recent increase in the RULC is that it really is just a correction post-GFC. As you can see from above, the GFC wreaked havoc with wages growth. It also led to a big decline in RULC. Heck in the June 2009 quarter nominal unit labour costs fell 2.3%, the biggest fall since 1985. But the impact on real unit costs had hit even before then.

In the September 2008 quarter the year on year growth was minus 4.0%. There hadn’t been a quarter showing a year on year RULC growth decline of over 3% for 20 years. So it was certainly out of the ordinary. As you can see however if you look at RULC from the past decade, the current level is only just above the trend that was being exhibited between 2002-2008: 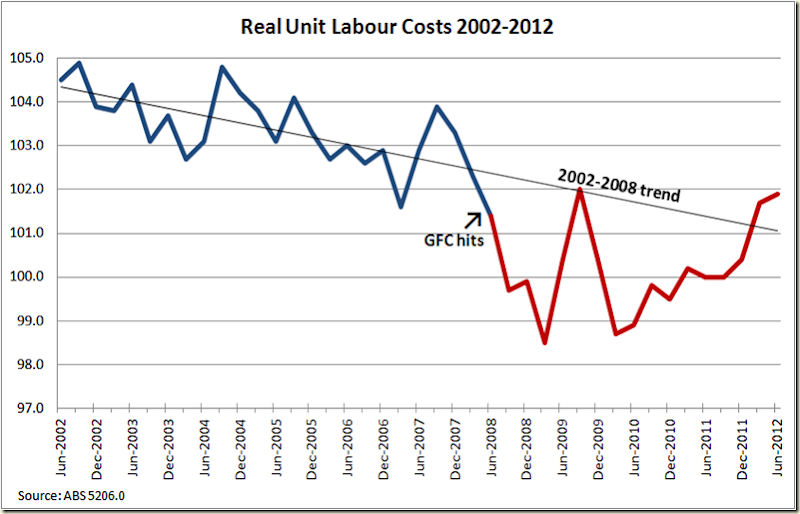 Now yes, we don’t want to see it continuing to rise. But the belief that real unit labour costs can infinitely decline is absurd, and is especially so when coming from the CEO of companies who certainly don’t show ever increasing profit rates year on year.

Presumably between 1990 and 2000, much of the increase in productivity was due to computerisation and associated moves away from labour to machines/IT.

Thus is it not arguable that those years were outliers and not to be repeated?

The current focus is on wages - they are 'too high'. But where is the focus on capital or technology advancement ie the other factors feeding into the cost of production?

I know this is a tangent to your article but I still think that you can lift productivity by hiring temp staff.

I have a brother that works in a consulting firm, they got rid of their support staff, secretaries and what not. So instead they have people on $100,000K+ resolving their own calendar conflicts. If you can hire someone at $40/$50K to do that, and increase the valuable work of the consultant, then you can lift productivity.

It's a small point, but markets fail, and fail often.

Anon 1 - My thoughts are that while moving from industry wide IR to enterprise bargaining might have improved productivity it would have only been small. But when you think of the 1990s you think of computers entering the workforce, not only replacing people but also leading to inefficiencies - eg in airplane bookings etc.

I agree with you all the way there.

It was like they wanted to lose the election,﻿ so Labor can cop all the predicted interest rate rises.