Wages Breakout Lets Us Down Once Again

It is really starting to get annoying. Today the ABS once again produced data that failed to show any sign of a wages breakout. How long must we go before we turf out these current union hacks and bring back some 1970s style leaders who will deliver the destruction of the economy so long promised us by conservative commentators since around mid-2007?

Today the ABS revealed that the Wages Price Index rose by 0.9% in trend terms over the previous quarter, and in seasonally adjusted terms rose only 0.71%. 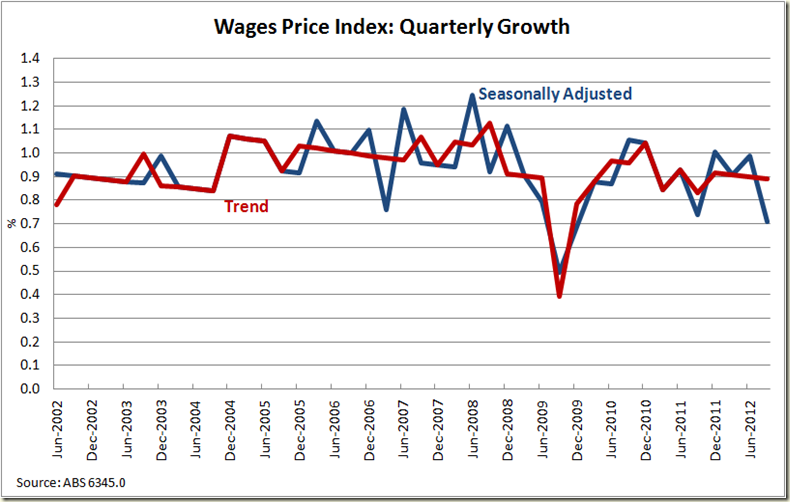 It’s clearly dire times for us who are trying to find evidence of the Fair Work Act leading to wages spiralling out of control, especially in that clearly, wasteful public sector: 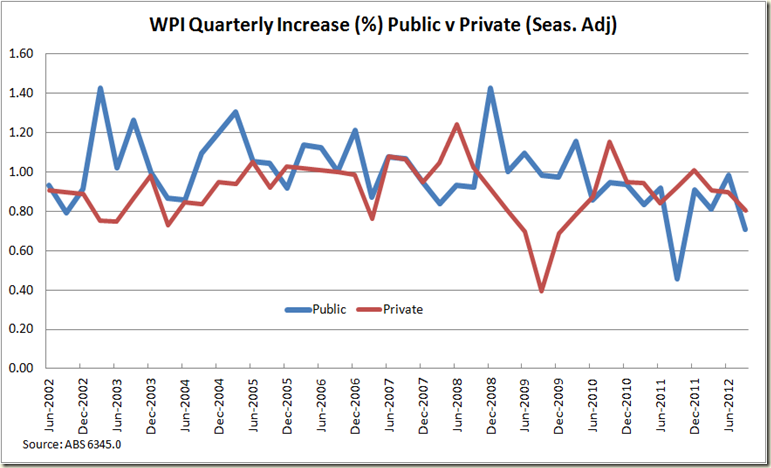 Oh look, bugger the quarterly numbers – they clearly must be just exaggerating an anomaly. Surely the annual figures will reveal the spike in wages: 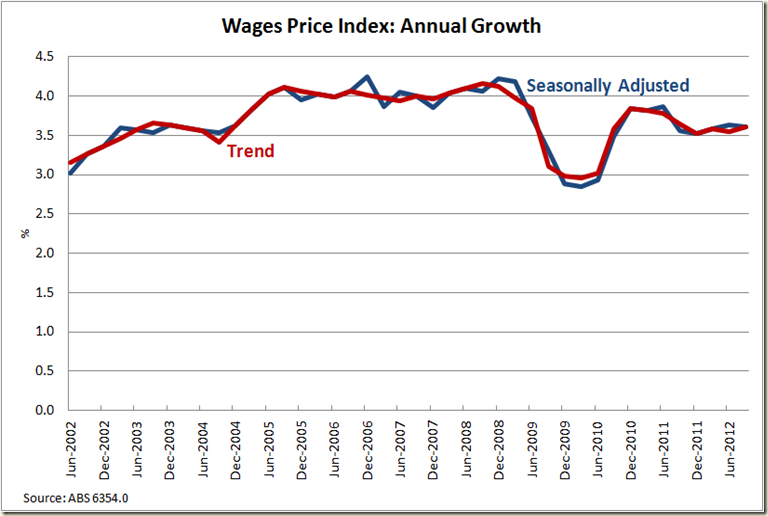 Bloody data. Adam Creighton was right – it’s bringing down this country. How the hell am I supposed to argue things if facts keep making stuff up? 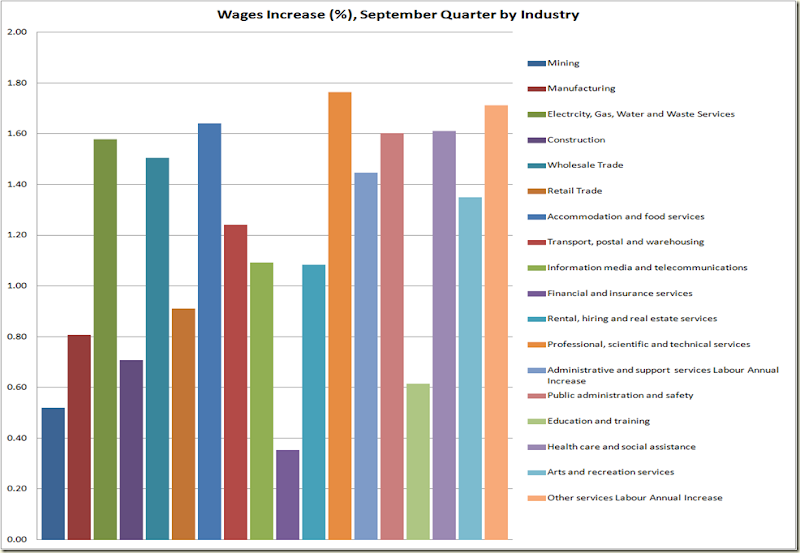 But it probably should not be too great a surprise as Ryan Buckland on Twitter informed me, September is usually the quarter that sees the smallest rise in the mining sector wages – and has been since 2009: 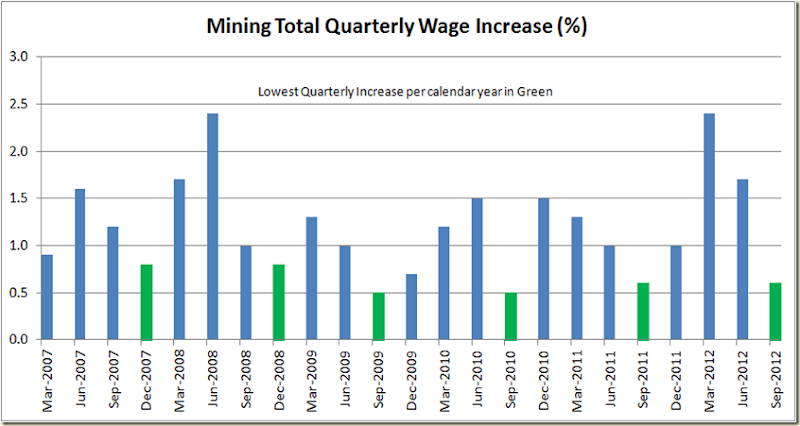 But a look at the quarterly increases in the Mining sector since 2005 shows that things are pretty flat; 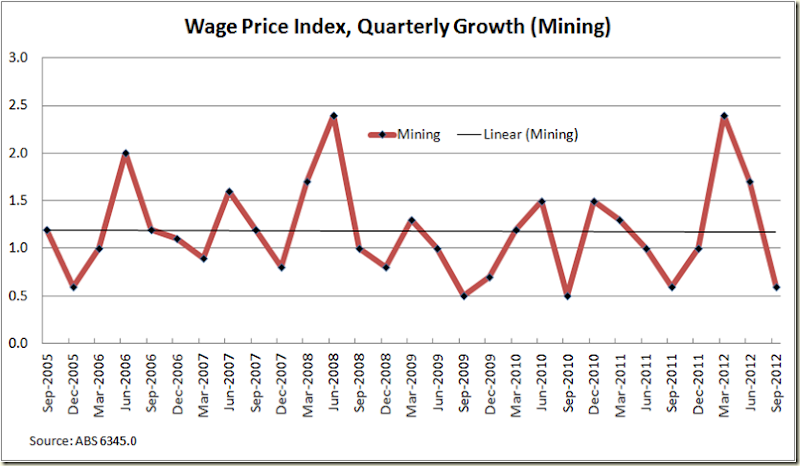 In annual terms however there has been an increase – coming off the rises of the proceeding two quarters. Over the past 12 months only the Wholesale Sales sector has had a bigger increase in wages. But again nothing we haven’t seen before – such as back in 2008 when Work Choices was the IR legislation of concern: 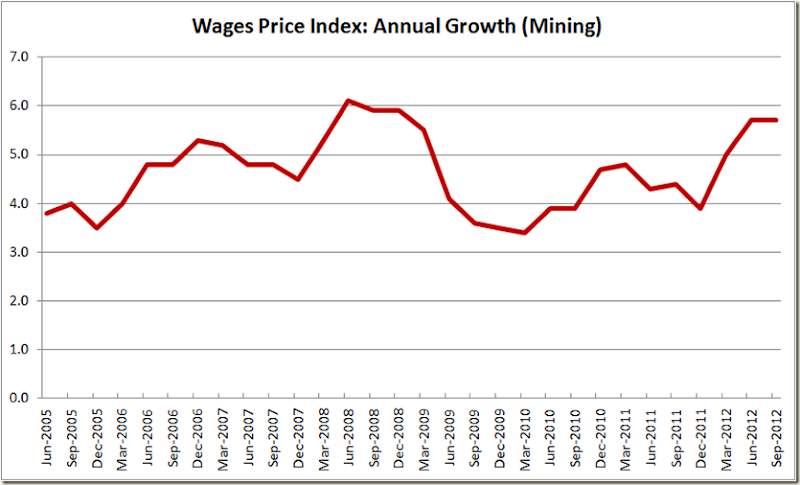 Of course its the Wharfies who are really running rampant. And we can see evidence of that when we look at the increase in wages in the industry they come under – the Transport, Postal and Warehousing industry: 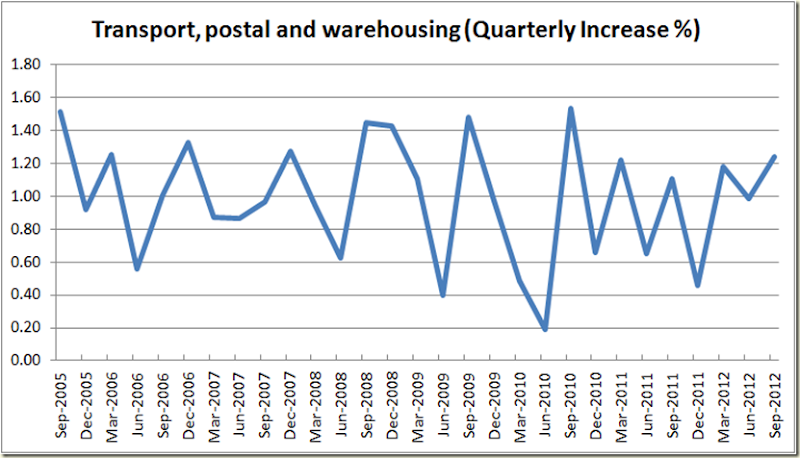 Which leads to this rather shocking annual rise: 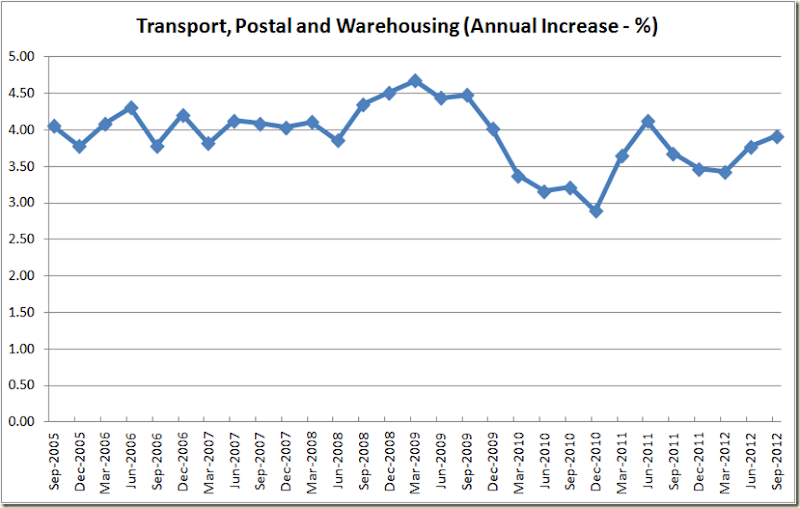 Ahh well. Maybe next time. See you all in three months, as we go wages break hunting (be wery wery quiet).

Thanks greg. As usual, a very insightful piece. But I think Elmer Fudd would have said "vewy vewy quiet"

Anon, I think you got me there

Very interesting, and it remains essential that the facts such as these are presented given our fact free MSM.

Added to this information on wages we could also consider the low levels of industrial action - with the recent exception of state government employee activity of course.

Then still on topic we can consider the ongoing dogwhistle related to productivity. For more on this see the recent Understanding Productivity report from UTS for the McKell Institute.

The high road or the low road seems very apt.

Yep David. And today we have the AIG and BCA calling for union control of the workplace to be reduced, because... well you know... the vibe...