My Drum piece today got a bit econ nerdy and talked about whether or not Victoria is in a recession on the basis of 2 consecutive quarter (or perhaps even 3) of negative growth of State Final Demand.

My points is that you can’t say it, but neither should we discount SFD as some sort of meaningless stat. When SFD starts going down, it’s a good time to start peeking around a bit and seeing what else is going wrong in the economy.

As a bit of a pointer, take this look at SFD of the states over the past 5 years: 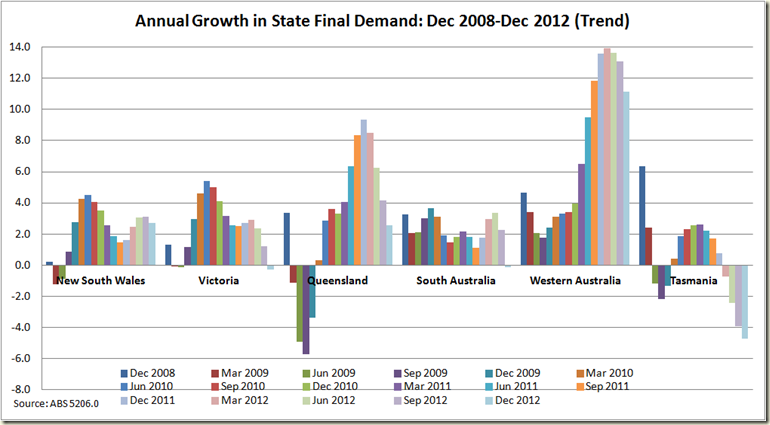 I think it gives a pretty good representation of the GFC and the recoveries in all states.

Or maybe I just get distracted by all the pretty colours.

In the first draft of my article I was going to do a bit of a step back and look at the big picture of the national accounts. There wasn’t room, and also it was a bit tacked on, narrative-wise, so here are the graphs The Drum readers missed out on:

First the a comparison of how GDP has grown over the past 5 year compared to other nations. With the fourth quarter data of 2012 the past 5 years’ worth now contains only periods of the ALP Govt (but yes I acknowledge there is a fair bit of carry over in at least the first 6 months) 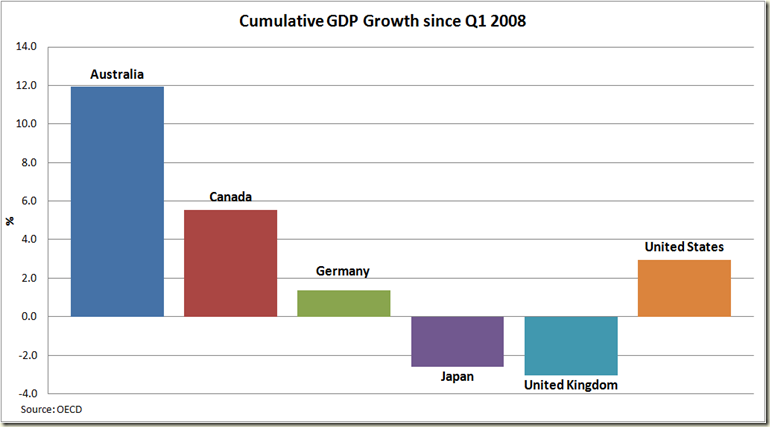 It’s pretty impressive, and amazingly shattering to anyone from the UK or Japan. Imagine living in an economy which is smaller than it was 5 years ago. And that’s in total. Forget about per capita. 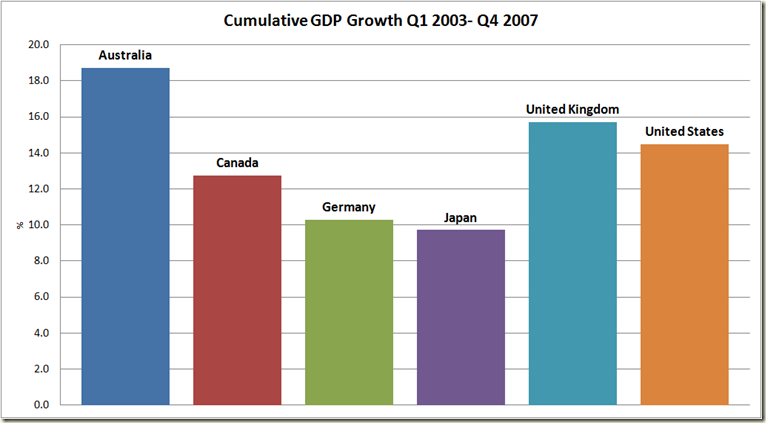 We have not only kept growing faster than these other countries, in the past 5 years we have increased our lead.

But I know what you’re thinking – the GFC is old news, how about since then? Well the ravages of the GFC began to ease in the second half of 2009. At that point even the UK and USA stopped having negative quarters of growth. So how have we gone in comparison to those countries during the “recovery” stage?

Well as the table below shows, the GFC pretty much stopped “directly” in the 2nd quarter of 2009.

After that the run of periods of negative growth stopped (for a while). So let;s see how each of those countries has done since Q3 2009: 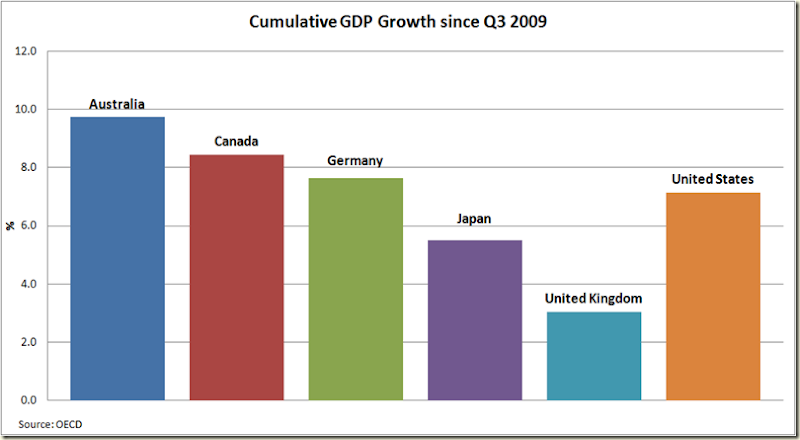 What do you know, we’re still leading. Yes everyone is growing better than they are when you don’t include the GFC, but that really highlights just how vital it is to avoid the depths of the recessions. Growth coming out of them well be pretty similar for all – we’re not miles ahead of Canada for eg, but you can’t look at the past 5 years and pretend the GFC was just some blip that had no impact.

But I know what you’re thinking – sure anything looks good if you spread it over a few years, but what have you done for me lately?

Well here’s how all of those countries did in 2012: 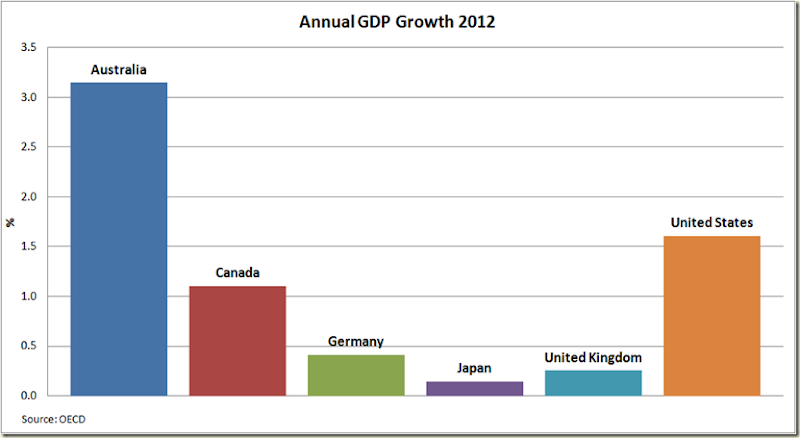 Any way you slice it, our economy is not just outperforming the big economies of the west, it has been doing so for 5 years. You can thank China if you want, or the Government, or if you’re desperate you can say the past 5 years are all due to John Howard, but you cannot say we’re underperforming. Given how badly the USA and Japan have been (which together account for about 20% of our exports) it’s rather stunning how well we have done.

And for an added treat, just to make any Australians reading feel extra warm and fuzzy. Here’s the cumulative growth over the past 10 years: 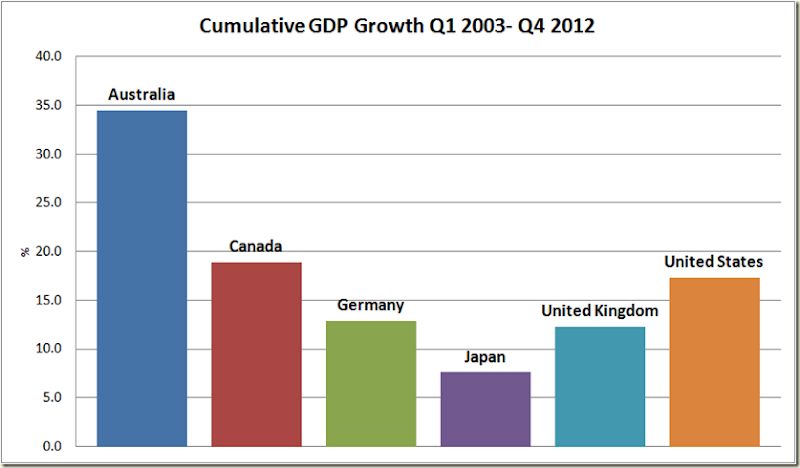 Or to show just how stark the GFC was, here’s the graph in linear form showing the cumulative growth each year since 2003: 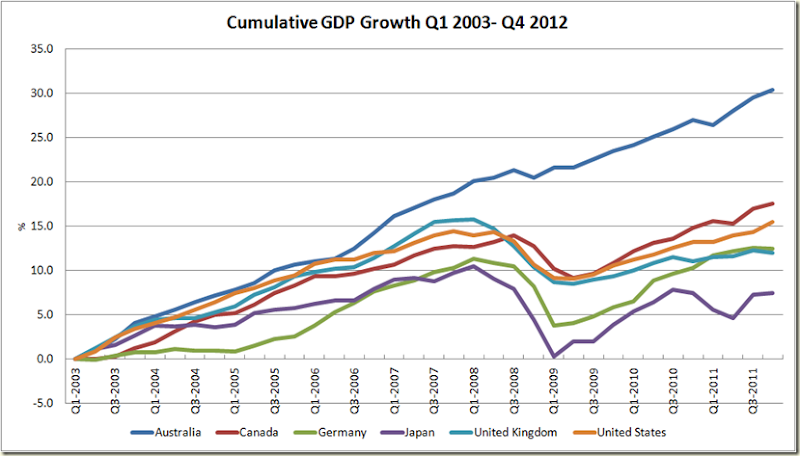 Someone was doing something right around 2008-09. But I guess we should bitch and moan about how the Govt blew the surplus…