I was going to do this last night, but I was side-tracked doing some other work, and also by the laughs going on down in Victoria.

And so today the December 2012 National Accounts came out showing a nice (and reasonably in line with expectations) result of real GDP annual growth of 3.1% in seasonally adjusted terms. It came off the back of growth in the December quarter of 0.6%.

In trend terms the December quarter growth was 0.6%, but the annual figure was a touch lower than the seasonally adjusted figure, coming in at 2.9%

It’s always worth remembering that the figures are statistical measures, subject to confidence levels and adjustments as are all other such economic data.

If we look at how growth figures have been revised over the past few quarter we see a bit of variation:

So it’s probably not too sensible to to get too caught up in revisions of any one particular quarter, but if you want to argue the economy was doing better than people thought in the September quarter of last year, today’s figures give you cause to at least begin arguing that.

Anyhoo let’s look at some graphs.

As you can see 4 of the past 5 quarters have had growth below the 10 year average. 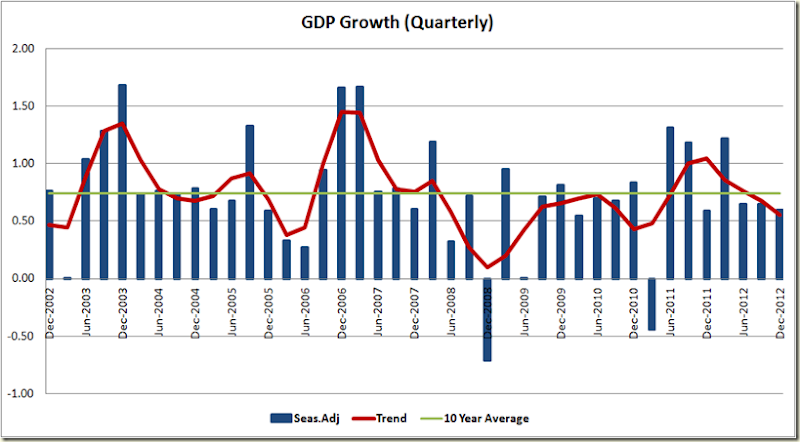 Not surprisingly this has meant that annual growth is now only just above the 10 year average. It’s still doing well – 3.1% is nothing to sneeze at – but the trend estimate really highlights the sense that the economy slowed down in the second half of last year. Also once the March 2012 quarter is left out of the annual growth figures (ie in the next lot of figures) then it’s likely we’ll see a drop. 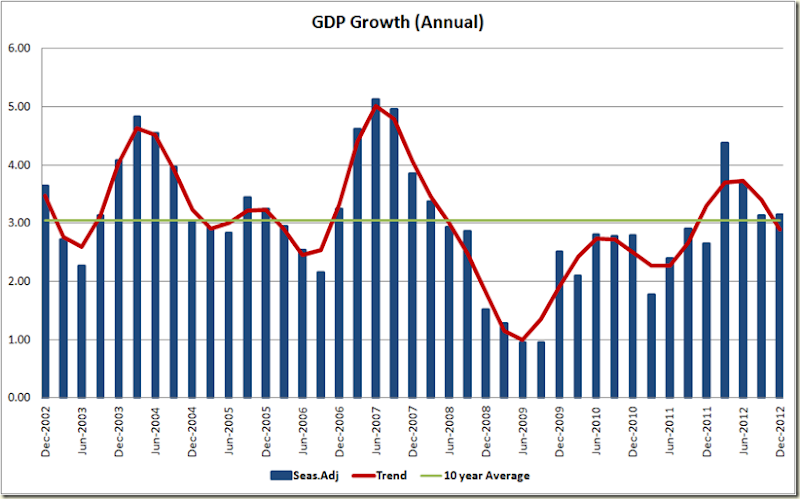 To keep around 3% annual growth the March 2013 figures will need to see growth of around 1.1%. I can’t see that happening – not unless the GDP deflator really goes down.

Which brings us to the next point  that while this is okish news, it’s not as good as it normally would be for the Treasurer and his desires for growth to lead to increased tax revenue. 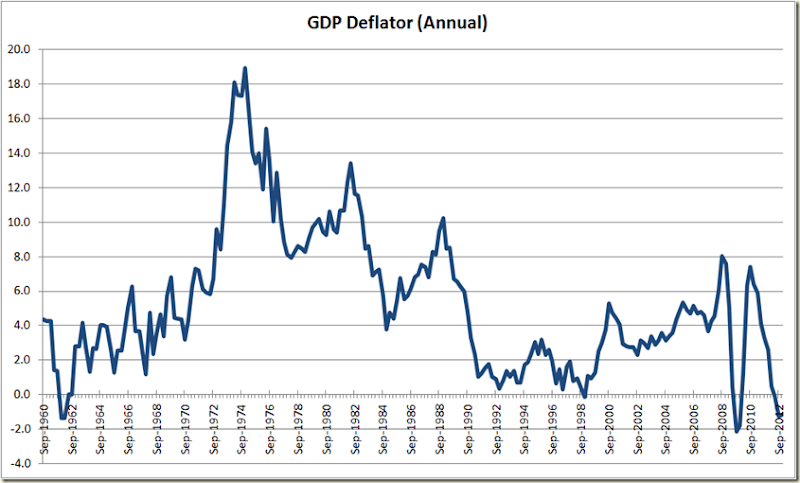 So forget inflation, in GDP terms were in deflation territory – and in a way that we have never encountered before (at least outside of the Great Depression). To get a grasp of how different things are now to what was occurring during the mining boom of the early-mid 2000s, compare the real GDP annual growth with the nominal growth: 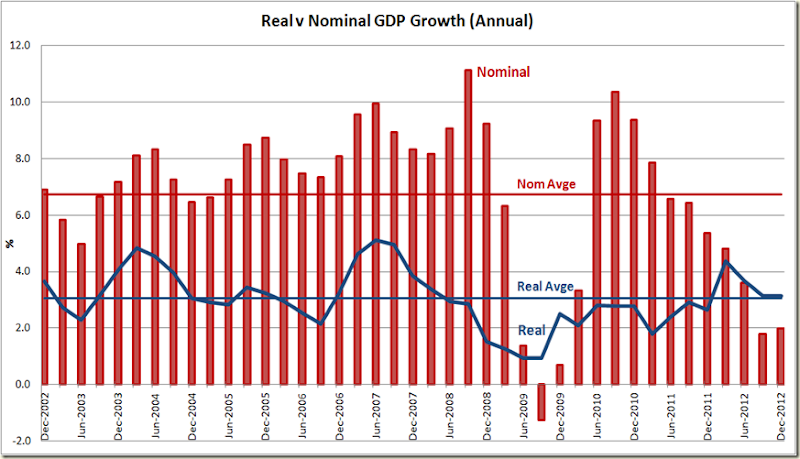 Just imagine how fatter Wayne Swan’s tax revenue would be if he had 6.7% nominal GDP growth? He could lay in a hammock and watch the surplus come in. Alas the hammock days of being a treasurer are over for now.

He can’t even look to great joy from export prices, because the terms of trade fell again. Down 2.7% to 88.8: 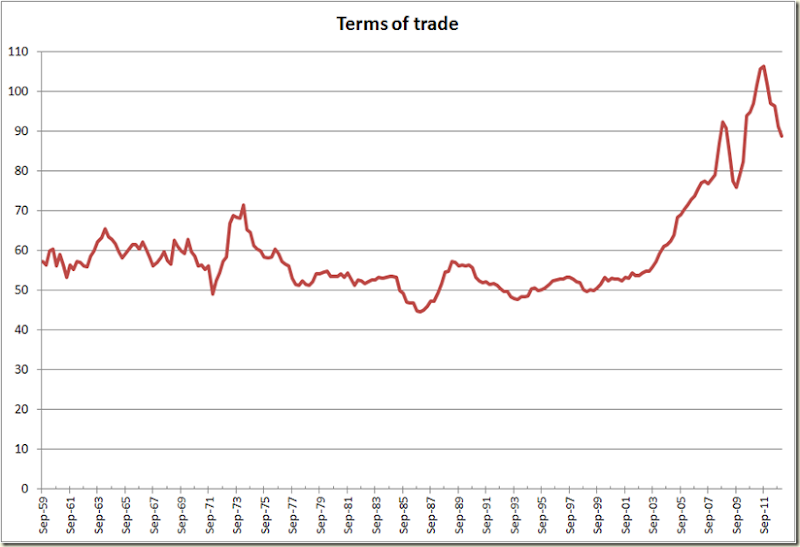 It still looks nice and high compared to the late 1990s, but a close up of the past 5 years shows a fairly different picture: 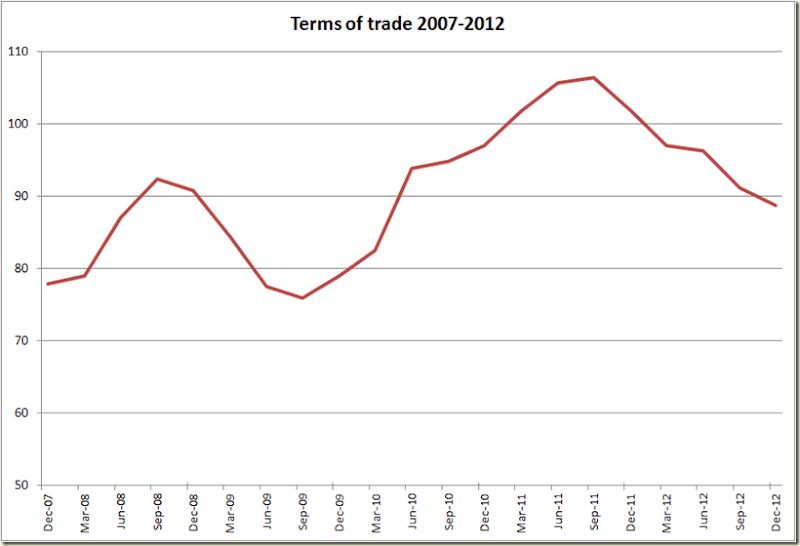 Not really booming is it?

It grew in the December quarter by 0.5% in trend terms and 0.7% in seasonally adjusted, making it 8 consecutive quarters of trend productivity growth, which is the first time that’s happened for 10 years. 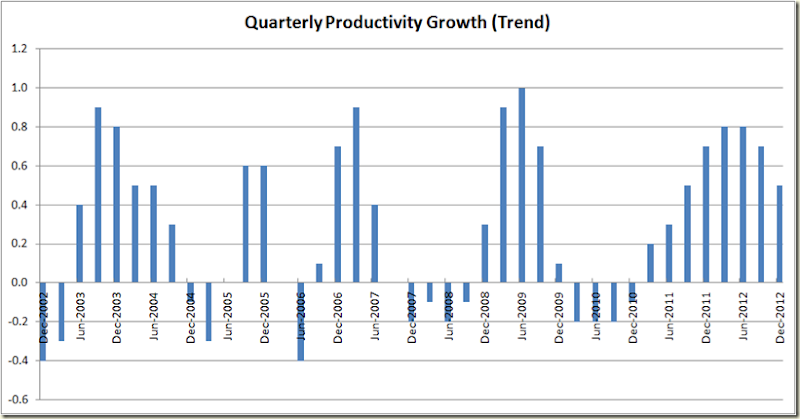 In annual terms we’re at a healthy 3.5% seasonally adjusted and 2.9% in trend. 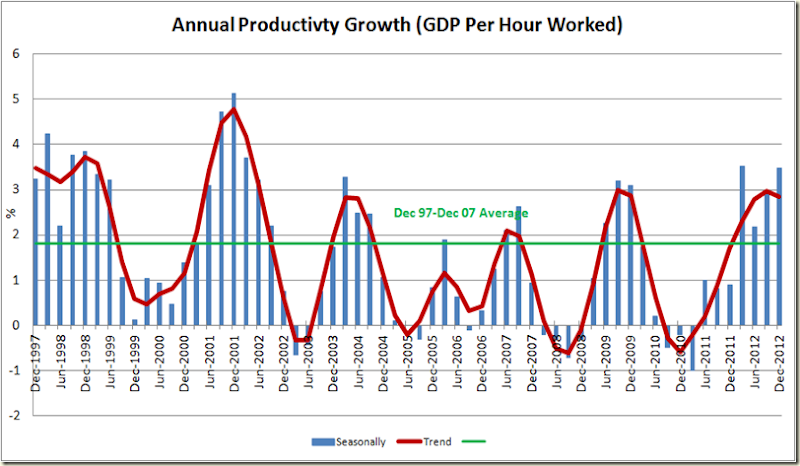 Next quarter will likely see drop in the seasonally adjusted annual growth because the March 2012 saw 1.9% growth in that quarter, so unless the next quarter matches that (unlikely) it will drop a bit, but it will remain positive.

We have also had now 4 consecutive quarters of productivity growth above the Dec 1997-Dec2007 average.  Surely cause for a bit of cheer. (Though I’m not sure why I’m telling you this because no doubt it was front page of The Oz and AFR)

On labour costs, “Real unit (non-farm) labour costs” did rise again in the seasonally adjusted measure, but it declined in trend terms.

There is always a bit of hoo-hah about labour costs rising – as though they can always keep falling forever. But as I’ve noted before, the GFC caused labour costs to dive, and the recent rises are now pretty much in line with the trend of where cost were expected to be given the trend of the 5 years prior to the GFC hitting: 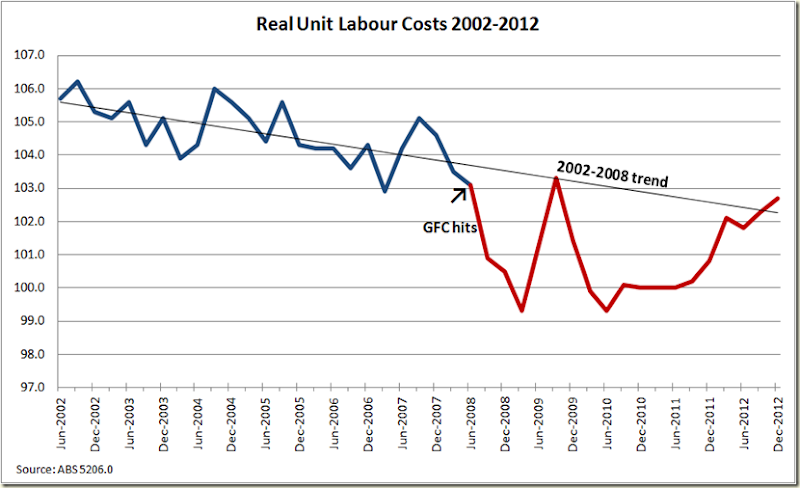 When it comes to the RBA worrying about labour costs rising, it looks at the nominal rate, and here we see nominal growth is actually below real growth – because of the GDP deflator being negative.

So are we going to see the RBA complain about rising labour costs leading to inflation? Not any time soon. With annual nominal unit labour costs growing at 0.6%, the whole “wages breakout” myth takes another big hit. In fact critics of the Fair Work Act are now at the point where they pretty much have to abandon macroeconomic data and focus on either industry specific (which too be honest hasn’t helped them much) or the dodgy “anecdotes”. Given that has been their main source of “data” it at least won’t mean they have to change much of their research. 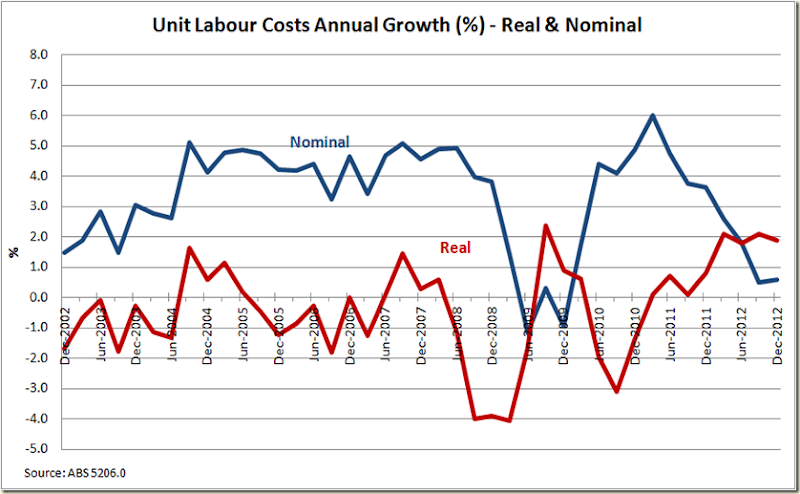 In the breakdown of where the money is going, the compensation to employees of total factor income rose slightly, meaning we have well and truly put the GFC hit to employees behind us, and the share is now back at long term (well at least past 20 year) levels: 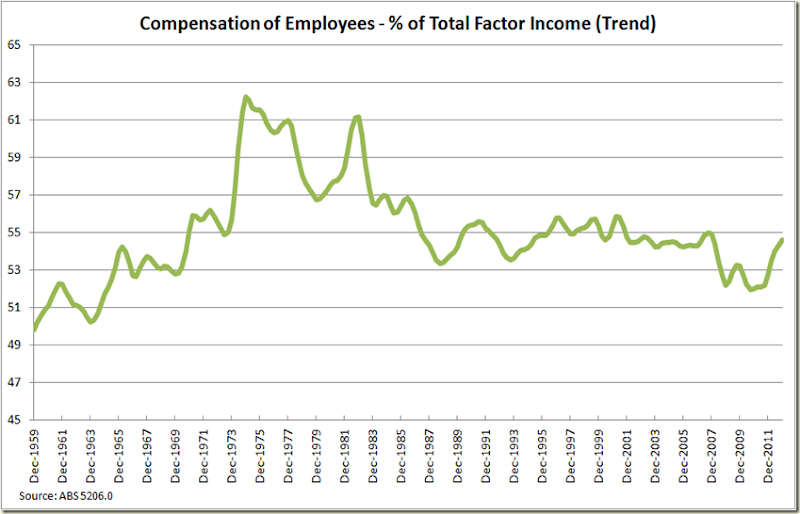 The share going to private corporations profits has thus declined again and is now showing a fairly big turnaround to a 40 year trend: 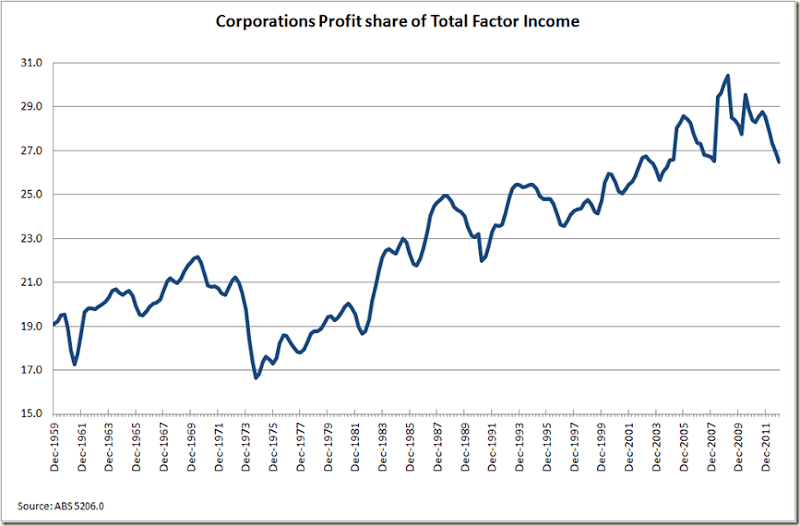 OK now to the states. There’s been a fair bit of palaver about Victoria now being in “recession” because it has shown 2 consecutive quarters of negative growth in State Final Demand: 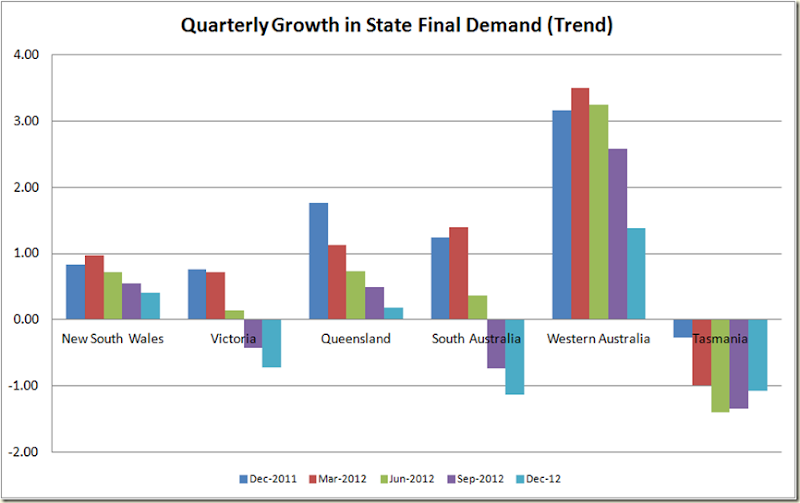 Now firstly (and as has been stated a little bit on Twitter by a few econ types), State Final Demand is not equal to Gross State Product. For example a lot of what Western Australia is “demanding” might actually be coming from Victoria. In such a circumstance it wouldn’t show up in Victoria’s SFD, but in WA’s even though it was being produced in Victoria.

Secondly we shouldn't give too much of a crap about whether or not a state or a nation is in technical recession because measures like 2 consecutive quarters of negative GDP growth are just a bullshit arbitrary designations of no real worth that no one really cares about if they want to be taken seriously outside of a talk-back radio show.

You want to know if you’re in a recession? How about looking at employment growth – that’s as good an indicator as GDP growth for the health of an economy.

But be that as it may. Clearly Victoria’s economy is not healthy; neither is South Australia's, and well Tasmania…  .

Quarterly SFD is also in my opinion a bit jumpy so I prefer looking at annual growth: 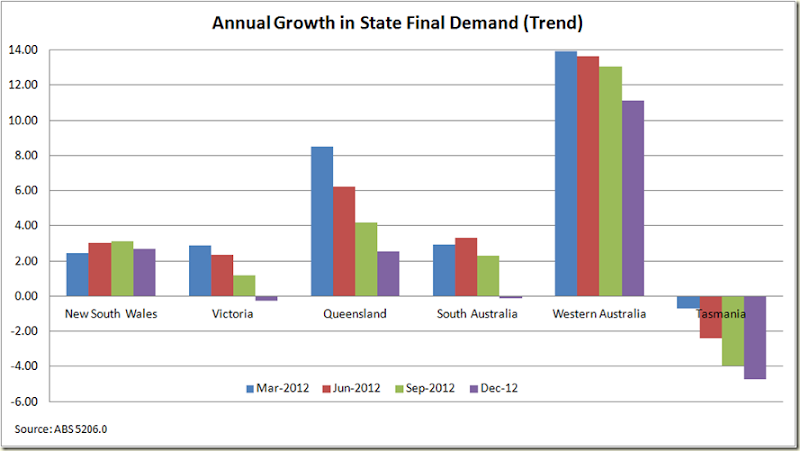 Again, Victoria not doing well. Recession? I’ll leave that up to those needing to sell newspapers.

Similarly Queensland is not coping with life as good as one might hope – and that is a bit more significant because you would expect its industries to be demanding production from other places. That it is not analogous to Gross State Product doesn’t mean it is not a good indicator of economic health. Just look at QLD’s annual SFD growth back to 1985 and you get a pretty good picture of when the state was doing well, and when it was not: 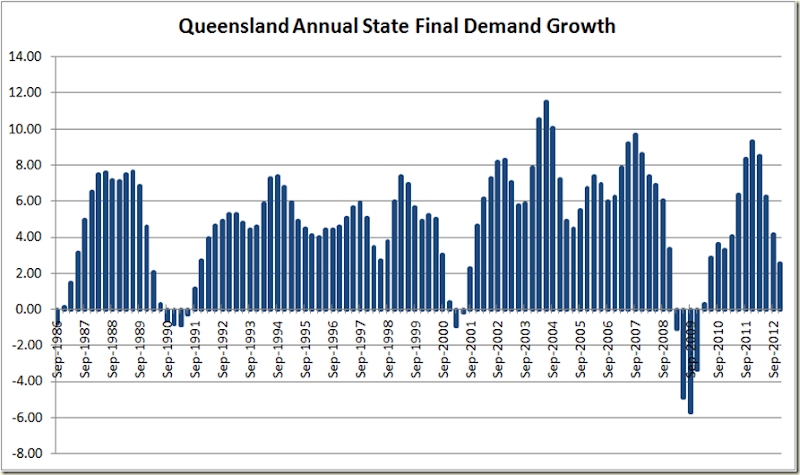 Below trend but now worse than that, but certainly no better. Inflation next to nothing, and the budget certainly not going to be in surplus (not that there’s anything wrong with that).