Drum piece: Plus a look at Australian and USA’s GDP over the years

My Drum piece today looked at a few things about our economy and how it is going compared to the rest of the world, and also how we seem to be getting just a bit more confident.

This of course doesn’t mean we’re never had it so good or any such guff, but that given the high dollar and the continuing crapstorm happening in Europe and America;s sluggishness, we seem to be holding up ok.

Last week I showed a few graphs about our GDP growth compared to the USA, and someone asked how it has gone since we last were in a recession, so because I can’t turn down a request to do a graph here it is: 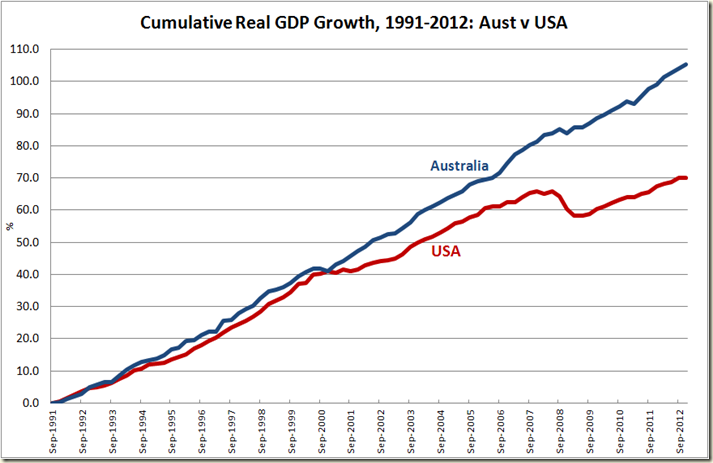 It serves to reinforce the message that avoiding the slump of the GFC was a big deal. Sure our mining boom increased our lead over the yanks, but what really put us in front was them falling off the GFC cliff, and even earlier their stumble during the Dotcom bubble bursting in 2000. You can see from 2003-2007 we do grow slightly more than does the USA, but the big difference occurs 2008-09.

Or to show that graphically, here’s the difference between our cumulative GDP growth since 1991 and the USA’s: 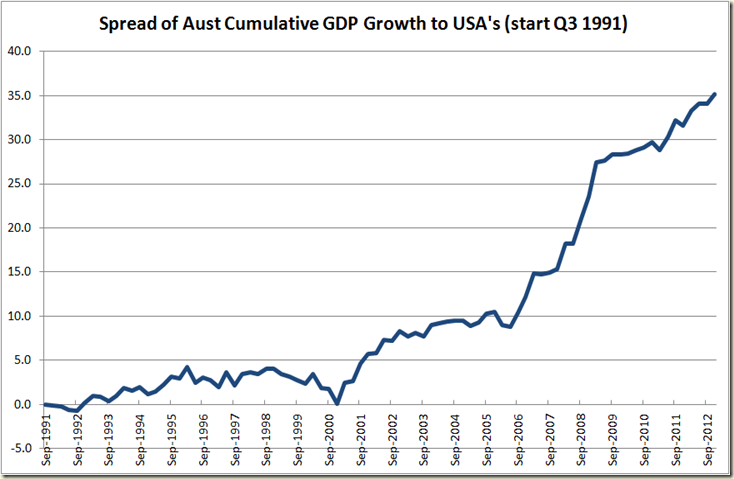 The boom (and their stumble from 2000 to 2007 did gives us a lead. But nothing improves your relative performance like  the other nation falling head first into a big pile of economic poo. 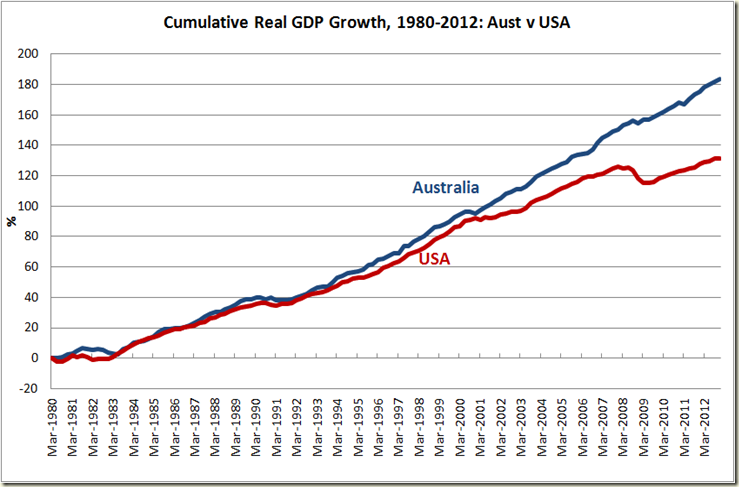 We both were hit by the early 1980s recessions, and again in the 1990s we were in the same boat. What you can also see in the 1990s recession while both nations slid a bit it was more about staying flat for a period than going right backwards. The GFC is a different fish altogether.

And again the spread: 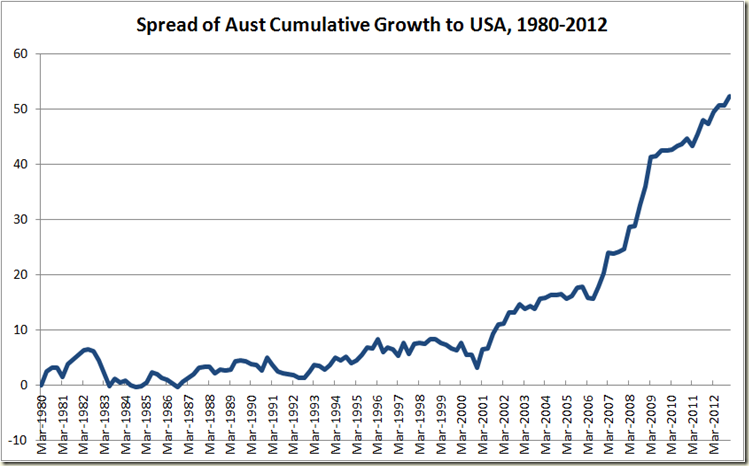 OK look, I’m boring you here with all this short time stuff. Let’s go back to 1972. 40 years worth of context: 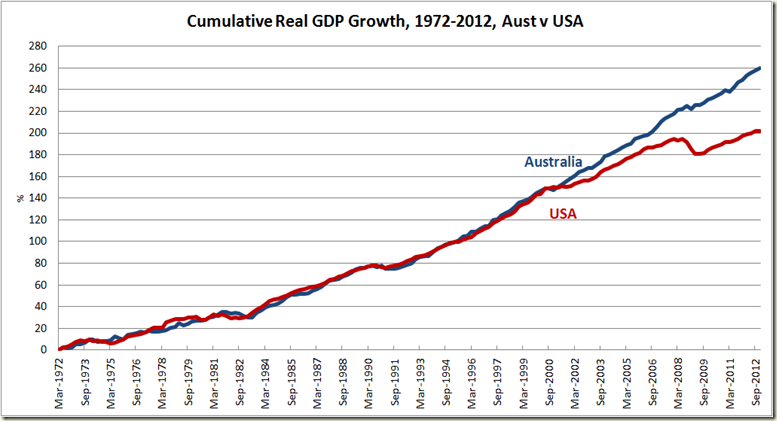 Now we’re really starting to se the big picture. Up till 2000 we were in lock step with the USA. They were hit by the Dotcom recession, we narrowly avoided it (because Costello sensibly let the budget go into deficit (though he kept it quiet when he did it), and then our mining boom began. Now by the end of 2007 we were looking pretty damn good. Our boom had put us nicely ahead – 10 percentage points – in effect it took from 2000 to the end of 2007 to put us 10 percentage points ahead of the USA in cumulative growth terms. But look where we are now. 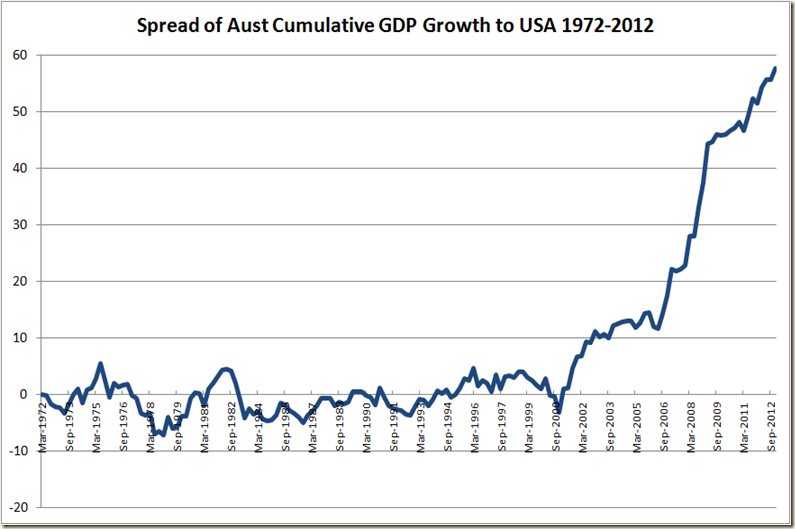 So all in all I think we can say, however it happened, and for whatever reason we did, we shouldn’t be bitching about missing out on the GFC. We should smile and get on with it.

One final thing. A lot is made of the “great moderation” that has occurred post the 1990 recession, and how we have avoided a recession. But we’re also avoided big booms of GDP growth as well. For example in the 1980s we had 8 quarters in a row where Australia's economy was growing by more than 4.5% per annum – and at one point it reached annual growth of 8.1%.

So is it better to have booms and busts or a long moderation?

Well here’s a comparison of the cumulative GDP growth in the 86 quarters since our last recession and the 86 quarter prior to that: 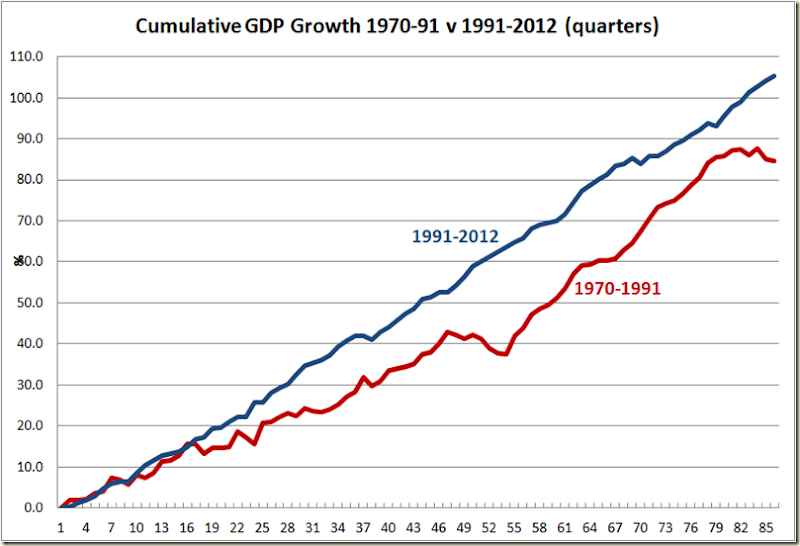 Steady as she goes, beats boom and bust all the way.

And just because I’m a graph junky, here’s the same graph but looking at GDP per capita. Unfortunately the ABS only goes back to 1973 for GDP per capita so I’ve got the cumulative growth from then till 1994 to ensure we have 86 quarters each: 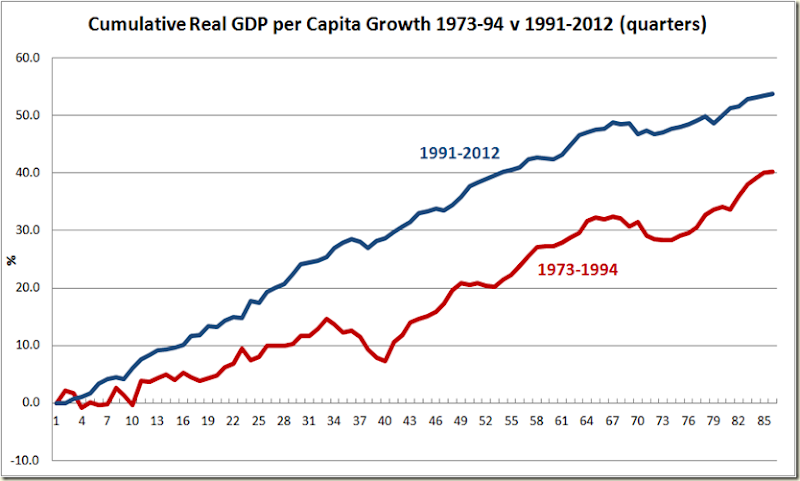 The moderation isn’t as stark – we’ve had a few more bumps since 1`991 on the per capita measure than we have on the total GDP growth. But still. At least we missed those God awful downward hits that we had in the twenty years from 1973.

Email ThisBlogThis!Share to TwitterShare to FacebookShare to Pinterest
Labels: Economy, GDP, The Drum