My Drum piece this week was looking at suggestions the progressive income taxation is a bad thing, and that Australia has an overly progressive tax regime.

Among the graphs I used was the average tax wedge form the OECD data. One other lot of tax wedge data they released was "marginal tax wedge” which essentially looks at the rate of tax you pay for working say an extra hour – essentially what impact the income related taxes have on the incentives to work more. 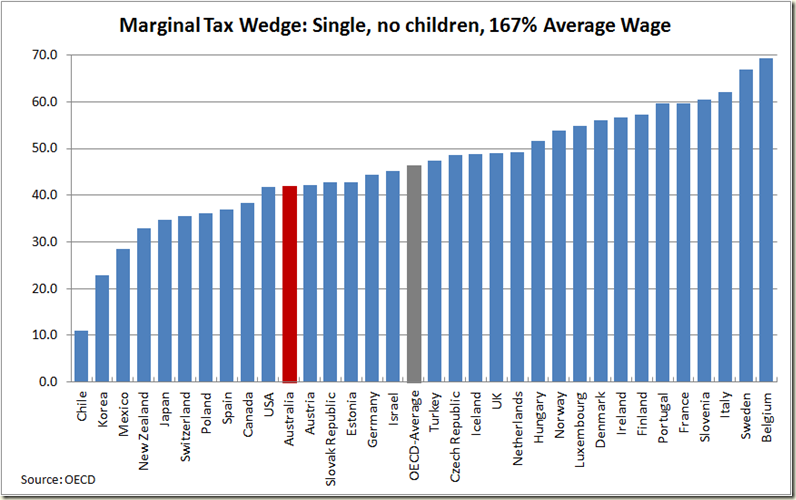 Clearly Australia's rate is no less of a disincentive to work more than is the case in America, and we are a long, long, long way from the stereotypical high progressive taxing countries of Scandinavia.

And if we look at what the tax wedge is for your typical family with 2 kids, one parent at 100% of the average wage and the other at 33% (ie a part time worker), then again we see that Australia’s tax system is hardly a factor in people deciding whether they want to work more hours. 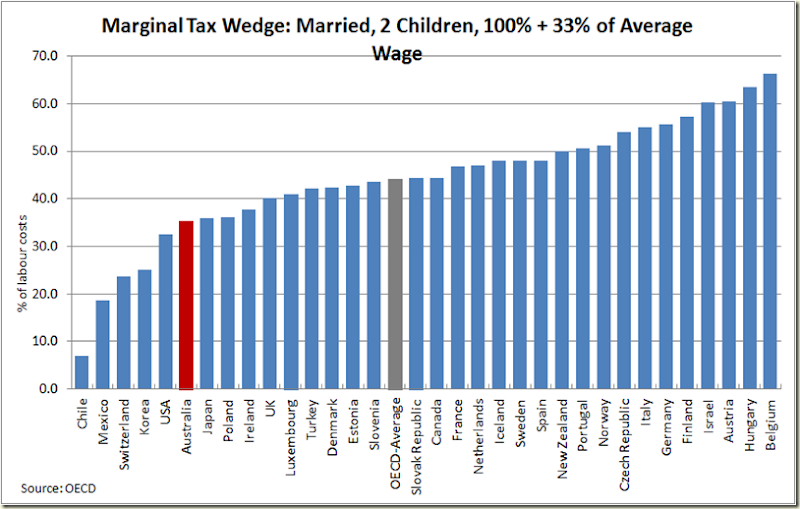 Now over at Catallaxy Files Sinclair Davidson has rather oddly accused me of “slight of hand” with my graphs on average tax rates of the flat rate because I chose a rate of 35%.

This rather surprised me because I chose it not for any nefarious means, but because that was the rate recommended by the Henry Tax Review as I noted in my blog post on the topic a week ago. The difference of course is the Henry Tax Review kept in place the 47% threshold for those earning over $180,000.

The Henry Tax Review Version looks like this compared to the current one: 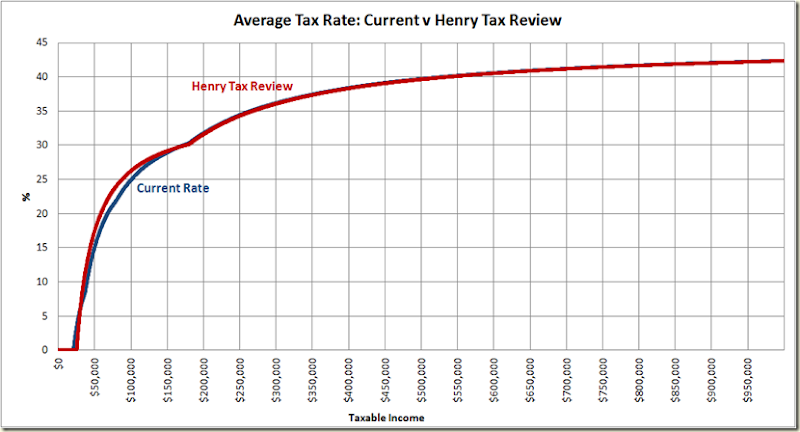 And in terms of difference in tax paid as a percentage of income it would be this: 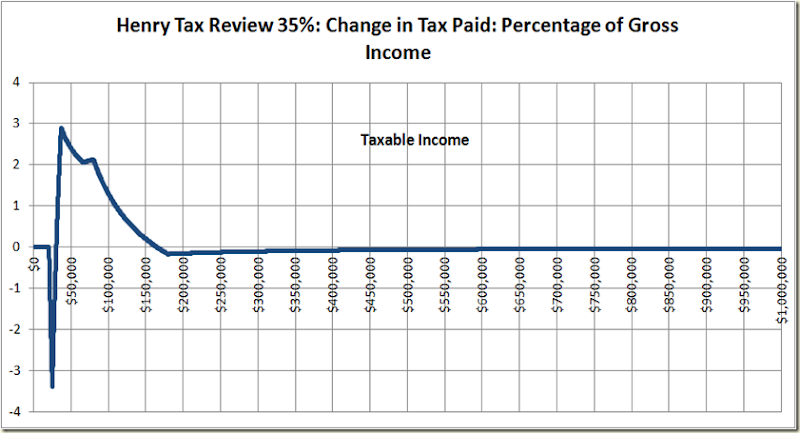 My point was that those in favour of a flat tax do so because it will lead to less taxation being raised and thus smaller government outlays – ie smaller government overall, and that it also favours the rich because they are the ones who currently pay the highest tax rate. As my final sentence states:

“When [the flat tax debate comes], remember what the fight is really about - the wealthiest paying a lot less tax, and a lot fewer services for everyone else.”

I guess I could have looked for guidance from Sinclair’s IPA 75 big ideas where they call for a flat tax. But oddly they’re not too desirous to put a number to it. But hey, I’ll play along.

Let’s compare the difference if the rate was 25% 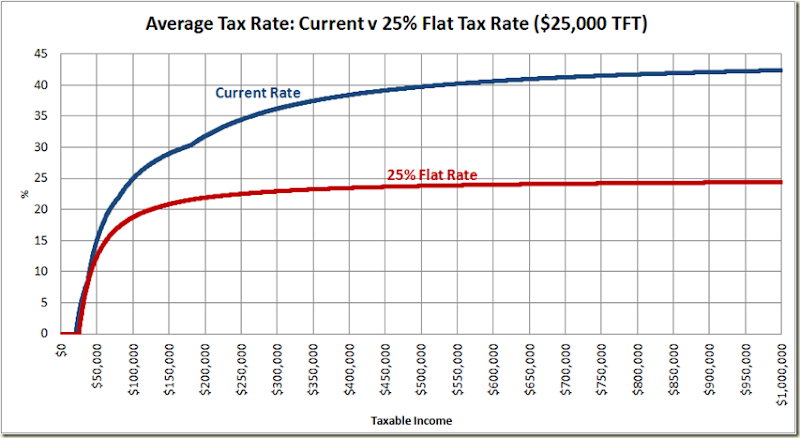 Certainly everyone now is paying less tax. Let’s see how much less according to income: [UPDATE – My original graph was wrong, I’ve corrected. Not sure if anyone noticed, but anyway, thought I’d get in before anyone did!) 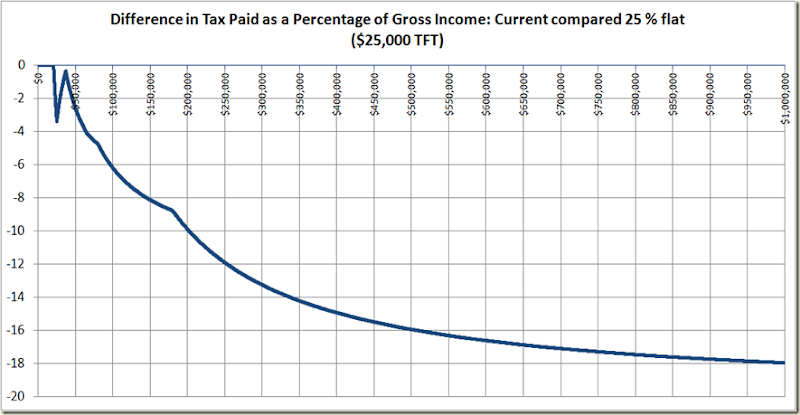 A big drop that just keep getting bigger. And once again – as I wrote in my article – that is always going to be the case when either moving to flat tax or just making your tax less progressive – the more you earn the bigger your tax cut.

I guess they just need it more.

But the bigger point is not that this is less-progressive, it is that it will bring in a shirtload less tax revenue. Now flat taxers no doubt like that. There may be a few deluded ones among them who think our current marginal tax rates are to the right of the Laffer Curve, but let’s stay in the realms of reality and assume (oddly) that if you tax people less, less tax is raised.

Well that’s fine. But when you’re looking at around an average 16% reduction in tax for those in the top 1% of the population, that would see the top 1% going from paying on average 41% of their $49.9 billion in collated taxable income to just around 23% which would see a drop of about $9 billion less in revenue just from the drop in tax paid by that 1%. And that’s each year. And remember the top 1% might pay a skewed amount of tax, but it is still only 9% of total tax. And remember as well income and withholding tax accounts for around 50% of all tax revenue, so we’re talking a massive smash to the budget.

And now you see why the IPA and those at Catallaxy love the flat tax. Less revenue means less government. Now that’s fine, but let’s not pretend that the above graph is just the only picture. Less tax revenue means less government services, be they education, health, social security, etc. Now they would of course argue that there won’t be so much of a need for government assistance or services because due to the income tax cut everyone will be doing so much better and will be able to pay for private health, education and other services that are currently provided through taxation.

I have put your post in and Sinclair's as well here.