Balibo and the Australian Film Industry

On the weekend, Robert Connolly’s film Balibo made $64,467 to scrape into 20th place on the Australian Box Office, and sneak over the $1 million mark in box office gross to $1,055,892. It’s unlikely to be around for much longer, and unlikely to make much more money. Given Connolly’s first two feature films, The Bank and Three Dollars made $2.5m and $1.4m respectively, I have to say I am pretty disappointed by the result. 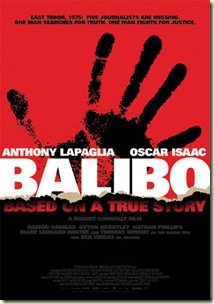 Given the great reviews it received, the above average attention in the press on the film and the issues surrounding it, plus Anthony La Paglia being fairly well known, I thought it was a chance to crack the $3m mark. It won’t even get close. At the moment the Paul Hogan and Shane Jacobson flick, Charlie and Boots is at the $2.5m mark, and looking like going strong for a while yet. Given it is also the type of film that will do well in regional areas, the makers would be pretty hopeful that it will get close to Hoges’ last film, Strange Bedfellows, which made $4.8m back in 2004.

So is Balibo a flop? And why didn’t it make more money?

First off, perhaps I am being cruel to Balibo – comparing a film based on the true story of six journalists being murdered in East Timor in 1975 to a thriller about someone using the banking system to meet out justice, is probably unfair given the later is an easier sell. The Bank, due to the addition of the female character played by Sibylla Budd, could be put in the “sexy thriller” class so popular with television crime series.

If we compare Balibo with the films more close to its genre we see a (perhaps) clearer picture.

Take Hotel Rwanda – another based on a true story film set in a war zone, that certainly didn’t make for easy watching (and yet which ends on a much brighter note than Balibo). In 2005 it made $1.08m in Australia – a figure pretty comparable to Balibo’s – and it was released in Australia after it had been nominated for 3 Academy Awards. The Clint Eastwood war/drama Flags of Our Fathers, again a film based on true events and not particularly packed with joy, made $1.85m here in 2006. The Nic Cage thriller Lord of War, again based on a true story, this time an arms’ dealer, and which features pretty full on scenes of war and violence. In Australia, it made $1.74m in 2006. And this year, another Australian film, the adaptation of the J.M. Coetzee novel Disgrace, which is violent, unsettling and decidedly not a date movie, made $1.1m.

So in that context it hasn’t done so badly. But perhaps we can be a bit more critical (or at least disappointed) by its box office performance. Consider The Killing Fields, back in 1984 it made $2.55m – well over double, and considering the increase in ticket prices since then you could suggest that would be a lot more in today’s money. The heavy political thriller Syrianna, was able to overcome its near incomprehensible plot to make $3.85m in this country in 2006 (released around the same time as Lord of War), the hard hitting thriller, The Constant Gardener made $4.48m in 2005 (and that was before Rachel Weisz won her Oscar for Best Supporting Actress in the film). And then there is the biopic of Che Guevara The Motorcycle Diaries, despite being in Spanish it made $3.5m in 2004.

So what did these films have that Balibo didn’t? Well obviously no George Clooney or Matt Damon like there was in Syrianna, no Ralph Fiennes, Rachel Weisz (nor John Le Clarre) like in The Constant Gardner, and The Motorcycle Diaries got a very strong run in the awards, had an amazing soundtrack and was about a very famous figure, and all in all was pretty life affirming.

So was Balibo stuffed because it didn’t have a star? Well no – La Paglia is not a nobody; but given the subject matter, and lack of a female role, they had to market it differently. Take the poster above. I think it is very striking. But I know what the film is about; to those who have no idea it looks like a political poster you might see on the wall of some left wing student organisation (and indeed were I a uni student the film poster would be on my wall). But far better is the poster used internationally: 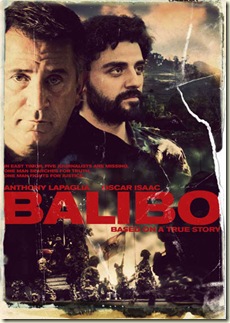 Immediately it conveys a sense of what the film is about – war – but importantly it also gets across that La Paglia is in it, and highlights the importance of the Ramos-Horta character – you might not know who the other guy is, but the poster conveys a sense that these two guys are going to be together. It might not quite look like a “buddy-pic” but at least it gets across a feeling to someone who has no idea about the subject that will make them feel comfortable enough to buy a ticket.

The poster highlights a problem this film had from the start – the subject is important; but the last thing people want to see is an “important” film (unless it’s by Steven Spielberg and is about the holocaust – and even then, they’ll be worried going in). But Balibo too often was presented as an “important” film; when it was given a rave mention on the breakfast program Sunrise a couple weeks ago, Kochie made a huge deal about how every high school teacher should be taking their students to see it, and how it was such an important subject. I kept screaming at the TV for them to say that people should go see the film because it’s a bloody good flick that will have you on the edge of your seat the whole time.

And that was what got lost – it is basically a thriller. It is not a documentary, but really, the way it was talked about you could have been forgiven for thinking it is.

I think it was a stunning piece of movie making, certainly as good if not better than The Constant Gardner, Syrianna, and Hotel Rwanda. But those pictures all received Academy Award nominations, and this now seems unlikely for Balibo, given it didn’t generate much buzz at the recent Toronto International Film Festival – unlike Mao’s Last Dancer which won the runner-up People’s Choice Award, and The Boys are Back, which received an 8 minute standing ovation and great reviews in Variety, the Hollywood Review and Cinema Daily. If those two films (Mao’s opens next week) don’t each make over $3m here (at least), I think that will be more indicative of the fact that there are big problems with the Australian Film Industry (and perhaps the Australian film “brand”).

I still don’t know if even had they used the different poster, had played up the thriller angle, and got some international awards whether Balibo would have made more money – after all it did make the same as Hotel Rwanda, and that had the benefit of Oscar nominations and a Hollywood marketing team; but there is one thing that I do think would have made a difference – the number of screens Balibo was shown on. At the most it was on 49 screens throughout the entire country, by comparison Quentin Tarantino’s latest flick, Inglorious Basterds was on 241 screens, Pixar’s Up was on 434, even the somewhat arty The Young Victoria was on 118. Yes there are lots of problems with the Australian film industry, and making good films is the first of them (though I would argue that’s happened a fair bit this year), but one of the major ones is getting quality Australian films being shown on enough screens to ensure that should people actually want to go see them, they don’t have to trek across the city to some small independent art-house cinema to see them.

Australian audiences deserve better; Balibo sure as hell did.

Though I agree with your points, can I add another aspect which may have kept people away? There's no surprise as to what happens. We know that the journalists were killed, and no-one has been caught for the killing. a story we all know, without a resolution. it provided a problem for the marketing of the movie. Like others, I'll watch the movie, but amongst all the other great movies (including Australian) on at the moment....Balibo will have to wait

What you're saying is all right, Balibo was terribly and very poorly marketed. Another big problem is it also took far too long to get made, as an Aus film on this topic should've really been made and come out within 10 years after the 1975 incident, not come out 34 years later.

Yep - there are lots of reasons why it didn't do as well as hoped (or at least as I hoped). But knowing the ending shouldn't be too much of a problem - Apollo 13 for eg did pretty well (though that had a "happy" ending).

I think the key was to get people seeing the film who didn't know about the story. I'm not sure if they did.

It remains to be seen how the film does in the rest of the world, where it's yet to be released commercially.