When you are at uni, you need a band that is yours through hell or high water. If you were at uni in the early 90s it could be Nirvana (if you were a bit of a sheep), The Pixies (if you really wanted to pretend that you were cool), U2 (if you wanted to be middle of the road – like I guess I did), My Bloody Valentine (if you thought The Smiths were just too damn cheery) or perhaps Living Colour (if you wanted to be funky radical).

Now all these choices were good, and you had to make one; but to be really in the groove, to be a true uni student, you had to have a local band that you followed, went to see play at dingy little pubs and were prepared to argue with others that with just a bit of luck they could be the next Lemonheads or Happy Mondays.

For me that band was Aunty Raelene.

Aunty Raelene were a four piece band made up of three blokes and one chick (she played bass). Two of the blokes were brothers – Basil and Derek Shields. Basil played lead guitar and vocals, Derek played violin in a manner that bore much lineage to John Cale of the Velvet Underground. They all went to Adelaide Uni and were out on the edge, sticking it to the man, protesting about the things that mattered, and doing it all while dressed in frocks.

That was the gimmick – they all wore dresses bought from op-shops and they wore them workers boots. I once asked Basil why they wore them, thinking perhaps there was some deeper statement being made, he looked at me weirdly, and said “Why do you reckon? It’s a gimmick”. “Oh,” I said, feeling rather stupid, but also somewhat disappointed that there was no deeper context.

Aunty Raelene were an odd mix – their songs were all protest and anger, yet also full of humour. The songs were great to sing along to (not so good to dance to), and the band themselves were laid back and funny during the set. They had songs like the great “Lionel Long Rap” which was written in the context of the first Gulf War and contained the following lyrics:

“Well my name is Lionel Long
And I want to go to war
’Cause I’ve heard they’ve got a lot of oil
And I think that’s worth dying for.”

(admittedly my memory is bit faded, so the lyrics there might be a bit skewiff) 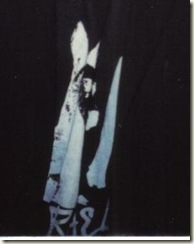 Ok maybe they were a bit more self righteous than they needed to be – but bugger that, why not be more self righteous than you need to be, when you’re young and at uni? And they also had a cool T-shirt – a black one with an “A” and an “R” with the picture of a kangaroo between (or was it a dog? I didn’t know then, don’t know now) This pic –is the only photographic evidence I have of me wearing it – the T-Shirt, alas, has long since disintegrated.

I got to know Basil through his connection with my boarding college. For a year or so he was going out with a friend of mine who boarded there, and so for perhaps the only time in my life I was able to go back stage after a concert. Except given they only performed at pubs, back stage pretty much meant standing out the front of the pub after the gig trying to look cool, but not to look too cool or too desperate nor too desperately trying to look cool (I failed, I was easily the least cool person ever to hang out with a band after a gig).

The place I most saw them play was at The Crown and Anchor in Adelaide. My favourite gig was one which had me and my pretty straight laced friends mingling with the most wacked out weirdos going. One guy had dreadlocks, which wasn’t so weird; that he had a mouse crawling around in his hair however did perhaps cause one to look at him and then elbow your mates to say “check out that weirdo”. As this was the early 90s and their fans were all broke uni students and we were in the midst of a recession, they also used to do things like raffle off a meat pack – an odd thing given I’d wager more than a few of their hard-core fans were vegan (and given the smell in the place they certainly were taking a stand against deodorant).

In 1995, Aunty Raelene brought out their only album – they were pretty much splitting up and it was done more as a reminder of what they had done, than in the hope of really scoring it big (though they did send it off to Triple J accompanied with an over the top media release). The album was titled New Dork Nation in reference to George Bush Sr’s phrase about a New World Order. I don’t know if it ever got played on Triple J – no doubt the Adelaide Uni radio station gave it a few turns – and I am sad to say I never bought a copy – I think it cost $20 and I was too skint at the time to buy one. I dubbed it off a mate, and sad to say I have lost that tape. (And obviously it’s not on itunes.)

The wonder of things about the net is however that you can find the most unusual things. After they split up, Derek and Basil kept performing together, first as the Raelene Brothers, and after they moved to Alice Springs, The Super Raelene Brothers. They are still going strong, and in October are performing at “The Concert” in Alice Springs, supporting Jimmy Barnes and The Cat Empire.  They have a myspace page where you can download a few of their more recent songs – “Wombo Lombo” sounds great.

Unfortunately the only existing Aunty Raelene song is “World Bank” being sung in the mid-late 90s by the Raelene Brothers – and it’s embedding has been disabled for some reason, so I can’t post it here (but click on the link – it’s a good representation of the band’s music).

If I had their CD now, would I still listen to it? Probably not; though I have occasionally found myself humming some of their songs which have come into my head for no good reason. But does that mean they weren’t worth following back then? Hell no; they were great – they captured the moment, they captured my moment at uni. And at least for a small, brief moment of time felt like I was one of a select few who were in the know of the coolest band in the world… or at least the Arts faculty of Adelaide Uni part of it.

i recorded this and uploaded it with permission, and disabled embedding to attempt to control the way it was used, ok?
We are sussing if the whole New DOrk Nation Album can be placed online for free... It is a timeless classic!
rexyh

I still listen to New Dork Nation to this day, I can't recall seeing them live, however I bought the CD to support Adelaide music at the time..../

I just checked...I'm not actually sure when this blog was written but New Dork Nation is actually now available on Itunes!

Thanks for your article. This band was the theme track to my uni life in Adelaide in the early nineties. I loved the passion and social justice of the lyrics. I was part of a lot of activist campaigns at that time and Aunty Raelene would play at all of our protests and fundraising gigs. Strangely enough I don't really remember the frocks at all, but I was probably dancing too hard to look up at the stage! Oxocubans was another fav from this time. If you want to reminisce about New Dork Nation it is available on iTunes now. Cheers for the nostalgia.