What Price a Job?

Kates pretty much kept to the line that classical economic theory was more important than any evidence which could refute such theory and thus all of the stimulus was a waste. Davidson (who is a senior fellow for the Right Wing think tank the Institute of Public Affairs) is hardly your unbiased academic. When asked by the committee to state one decision made by the Rudd Government that he agreed with he stated the decision to appoint Kim Beazley as US Ambassador. When asked to name an economic policy he agreed with he said the decision by the Rudd Government to implement the Howard Government tax cuts. It was a joke really. He took an extreme partisan position and came across as academic and swayed by the facts as a Fox News anchor.  At one point he even disputed there had been a mining boom.

Kates came out with the wonderful bit of economic bullshit that the stimulus package had cost $1.5 million for every job it created (though he pretty much denies the stimulus did create any jobs which somewhat destroys his argument… but logic wasn’t really in play here). So where does this $1.5m come from? Well given that it is trumpeted by the Government that 200,000 jobs have been saved, 1.5m x 200,000 gets you $300 billion, which is the standard amount of debt that the Liberal Party wheels out saying the Government will have to pay back, so it’s not hard to see how he got the figure of $1.5m.

Firstly let’s have a look at the “didn’t create any jobs argument”. Both Kates and and Davidson argued tax cuts and decreases in interest rates are the best (in fact when you get down to it, only) way to stimulate the economy. They based this on theory. Davidson said if you say Australia’s stimulus package worked, then why haven’t all the other countries that put in stimulus packages also kept out of recession. Apparently he must think that our stimulus package is exactly the same size targeted exactly the same way and done at exactly the same time as other economies. That a Professor of Economics can come out with such tripe makes me think I should have stuck in the Economics field after getting my 2nd Class Honours Degree, because I’d probably be head of RMIT now. Methinks Davidson has spent too much time living in the ceteris paribus world of economic theory. All things are not equal in the real world unfortunately…

Davidson also produced a paper of his which he suggested showed that the $10b stimulus package (the “cash splash”) had no impact on retail sales. He said that the retail sales in the last 6 months (in the graph on the right), 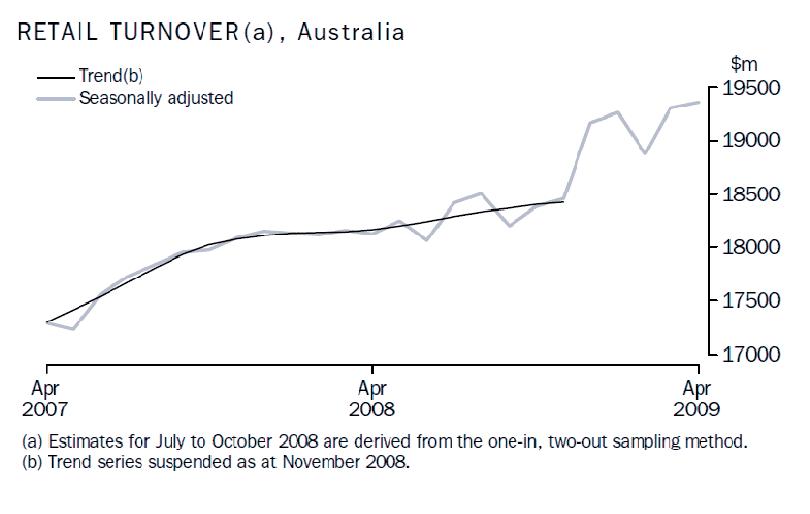 while constituting a jump, were not significantly above the long term trend.  He is not able to countenance that the cash splash ensured retail spending stayed at trend levels, because he says the Treasury didn’t do any specific modelling on the cash splash so there is no way it could have worked.

Yep, essentially he argues that because the Treasury didn’t do the requisite amount of theoretical work beforehand, the results can’t be attributed to the stimulus.

And they wonder why people talk of academics living in ivory towers?

His argument is like saying someone couldn't have survived falling off a roof onto a mattress because they hadn’t done prior analysis of the mattress to determine if it was the right thickness, whether the speed at which they would hit the mattress would result in injury or death etc etc. Davidson in effect, does not believe that the Treasury could have known that a mattress would soften the blow of the fall and thus put one there after making a quick estimate of how thick it needed to be to save the person falling from the roof.

Another of the economists in attendance, Andrew Leigh of ANU, did a rather more bizarre thing. He came to the committee armed with research based not on his theory of what people did with the stimulus money, but on his actually asking people what they did with it. He wanted to see if the amount people said they spent of the cash splash was more or less what people overseas spent when they got tax cuts as stimulus – essentially he tried to answer the question of whether it was better to cut taxes or give a cash handout to stimulate the economy.

Leigh also came to the committee with a rather different attitude to Kates and Davidson – he admitted to the committee that he wasn’t perfect and neither was his research! (Astonishing, I’m surprised they let him through the doors).

Leigh found that the amount of spending done by households has no relation to the income – ie rich people spent as much of their bonus payments as did poor people. He did find that there was a significant relationship between those who spent the bonus payment and those who were worried about Government debt. So if you were worried about the debt you were less likely to spend all of your bonus. Overall he found however that 40 percent of those who received the bonus payments spent them – almost double the amount for the tax rebates in the US in 2001 and 2008.

Although Leigh does not state categorically that this proves payments were better than a tax rebate (he is not so stupid as to think his one paper proves all), it does go a good way to countering the arguments of the Liberals that people are more likely to spend tax cuts than bonus payments.

One other economist who appeared before the committee was Richard Denniss from the Australia Institute (a left wing version of the Institute of Public Affairs). He came with a fairly stunning proposition – he said of course the stimulus packages had created jobs and is needed, because if it didn’t where did the money go? Inflation isn’t rising, and employment remains weak. If the stimulus wasn’t needed, inflation would have risen  - because it would have created excess demand. When asked about debt and interest rates by the Liberal Senators, Denniss pretty much shrugged and said, so what? He explained that it was obvious unemployment was growing, so the Government should do what it could to keep people in work. When Senator Coonan asked again about rising interest rates, he echoed something I wrote a couple weeks ago. He said “If I had to choose between losing my job and paying an extra 1 percent on my mortgage I know which one I’d choose”.

Denniss dismissed the Liberal’s concerns about debt, saying it is manageable, and so long as the work being done with the stimulus (he wasn’t real supportive of the cash splashes) was building something that we otherwise would liked to have built sometime in the next 5-10 years, then we were obviously getting value for money.

Which brings us back to the $1.5m per job argument. Denniss pointed out that costing the amount of each job was not simple, and subject to many many assumptions. He pointed out that when a person loses their job it takes on average a long time to get it back, and similarly that when the national unemployment rises, it takes longer for it to fall. He also pointed out that even when GDP growth returns to positive territory the unemployment level keeps rising – it lags. 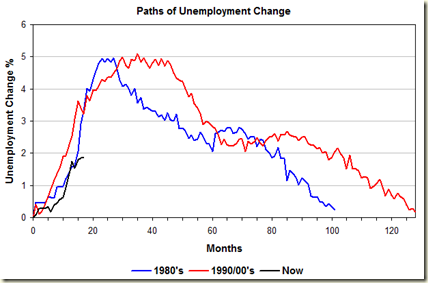 Over at Crikey, economics and pollster blogger Possum Pollytics (Scott Steele) did some very interesting analysis as well on this issue. He found that in the 1980s and 1990s recessions it took between 20-30 months for unemployment to peak, but a further 80 months for it to fall back to the levels it was at the start of the recession.  Essentially this means that a job lost now takes a long time to get back. He estimates that were unemployment to reach the 8.5% mark treasury was forecasting back at the budget, it would be about 2016 before we got back to our pre Global Financial Crisis level.  However, let us submit that the stimulus has worked and that unemployment will “only” rise to around where it is now  i.e 6%; on that measure if we follow the same return path as the last two recessions, we will be back to pre-GFC levels in 2011.

All this neatly demonstrates that it is bloody important to keep the unemployment rate down.

It also demonstrates the complete and utter stupidity of saying the stimulus jobs cost $1.5m each. To do so is to ignore the amount of welfare paid over the perhaps 5 years it takes to get all, the impact on GDP foregone over that period. As Possum writes:

When you dump a bucket of money into an economy like the government did, it has consequences – there is simply, absolutely no “debate” on this from anyone that can find their economic arse with a map, a GPS system and a set of directions.

The only real debate – and lets be blunt here, it is THE only REAL debate here – is over whether the squeeze is worth the juice, whether the costs are worth the benefits. Yet on this question, the popular cliché of “each job saved cost $X” is not only worthless, it is comprehensively dishonest to boot.

Denniss sounded so REASONABLE in the committee hearings as opposed to Kates and Davidson. I have a bit of a crush on Dr Richard now I think

I guess both Labor and Liberal will be happy now, because they both have economists singing their tune. I simply make five observations:

1. Australia had the best economy going into the GFC and it has the best coming out. This is the least we should expect from a minimally competent government.

2. The G20, World Bank and OECD are the organisations that didn't stop the GFC coming and they are the same organisations Swanny is relying on for his kudos. You've got to take praise where you can get it I suppose.

3. $300bn is a lot of money in anyone's language, even allowing for some hyperbole. Whether the magnitude of the stimulus was warranted or not is a matter for history to determine. But when the time comes to repay it, there will be no equivocation about the pain the debt will cause.

4. The BER is Builder's Employment Regime. Education is the political justification. There can be no doubt that in the states where the building industry wasn't in the crapper, the BER funding is causing enormous distortions in the marketplace, to the point where commercial entities with money to spend can't get things built. Yes schools are getting nice new facilities. They are also getting nice new recurrent funding timebombs because the State govt's can't afford to run & maintain the buildings. There can be absolutely no doubt that money has and is being wasted in the panic that accompanied the rollout. Money which could have been better spent.

5. The Stimulus has created no net new jobs. How many it has saved is a matter of modelling, not fact. If anyone doubts the impact of the cash splash, just look at the amount of cash retailers have exported to chinese suppliers in recent times. And I'll bet no new jobs were created in retail.