The Pinball Wizard and Crazy Politics

On her Twitter page today, young Green’s Senator, Sarah Hanson-Young noted that today was 12 months since her Maiden speech, and she remarked “wow what a crazy year it has been!” Unfortunately for Senator Hanson-Young, on a day when Victorian Tourism Minister Tim Holding was found after getting lost bush walking on Mount Feathertop and NSW Health Minister John Della Bosca came out and admitted he had been cheating on his wife, federal MP Belinda Neal, and had been having an affair with a woman half his age, the bar has been well and truly raised for using the “crazy” adjective. When he was found, Holding was described as being “cold, wet, scratched, bruised and disoriented but overall was "fine”. But for the last, the same most likely could be said of Della Basco today.

Equally crazy is Federal politics, where the economic news today revolved around the Balance of Payments figures coming out today. They showed that export income had fallen pretty drastically – mostly due to falls in commodity prices. The other economic news was the Reserve Bank deciding to keep rates on hold. For now.

This is what the RBA said:

Economic conditions in Australia have been stronger than expected, with consumer spending, exports and business investment notable for their resilience. Measures of confidence have recovered. Some spending has probably been brought forward by the various policy initiatives; in those areas demand may soften in the near term. Some types of capital spending are also likely to be held back for a while by financing constraints. But overall, it now appears that investment may not be as weak over the year ahead as earlier expected. Higher dwelling activity and public demand will also start to provide more support to spending soon and, hence, growth is likely to firm going into 2010.

The interesting thing will be tomorrow’s National Account figures which will show GDP growth in the June quarter. A week ago economists (yeah those guy who are never wrong) were thinking there would be GDP growth of around 0.5%. After today’s Balance of Payment’s figures they’re quickly revising that down to anywhere between –0.1% to 0.3% or somewhere around there (let’s not kid ourselves that it’s anything more than an educated guess).

Now you would think the Government would be disappointed should growth come in lower and that the opposition would be crowing if the GDP is low because that would mean the stimulus has failed. The only problem is that in the last week Malcolm Turnbull and Joe Hockey have been going on that the stimulus should be wound back because the economy is going better than expected. Here’s Turnbull today:

The Opposition Leader told The Australian yesterday the signs of economic recovery made it clear the Prime Minister's $43billion economic stimulus package was too big.
But Mr Rudd was unable to wind back spending, Mr Turnbull said, because he had made the mistake of promising a new hall or library to every primary school in the country, and he would pay a massive political price if he reneged on the pledge.
Yesterday Mr Turnbull said the signs of economic recovery had vindicated his stance, and that Mr Rudd had tied himself to public expectations and would be unable to cancel the spending on schools no matter how compelling the economic evidence.
"My view is that the government should be easing back,"

It is a rather bold statement to make given that it was only the start of June that Turnbull was criticising Rudd for acting as though the economic crisis was over. So now we are in the crazy situation where the opposition is berating the Government because the economy is doing too well and thus the stimulus should be wound back, but also that the stimulus has not had anything to do with the economy doing too well. Similarly we have a Government who wouldn’t mind a few slightly gloomy economic figures if only to show Turnbull as a total economic dill and to also help with their argument that the stimulus needs to continue.

Thus we had Joe Hockey on the weekend saying:

'The Government's spending too much money and it's going to put upward pressure on interest rates and its going to cause Australians to pay higher taxes than they should be paying to pay off this debt. Sooner or later the Rudd Government has to pull back on playing Santa Claus and start playing the Grinch.”

Which is a nice line, but not all that intelligent. Gee Joe, you think interest rates might increase from the lowest level since 1960? What a genius. Here’s the thing Joe, if interest rates went down from here that would mean only one thing – the economy is officially in the toilet. Actually it’s gone down the S-bend and is on the way to the sewer. When interest rates are at  a stimulatory level you want them to go up because that means the economy doesn’t need to be stimulated to such an extent. And here’s the other thing – the overwhelmingly large percentage of the stimulus planned in the next two years is on infrastructure and building, which has a lot less impact on inflation than the cash payouts or tax cuts.

Wayne Swan came out today and had a whack at Joe, saying:

Joe Hockey must be "deaf, dumb and blind" if he thinks the government's economic stimulus is not working, Treasurer Wayne Swan says.
He was again defending the government's decision to continue with its planned investment spending, even though there are signs that the economy is over the worst of the impact of the global recession.
He said the stimulus package has had a dramatic impact on confidence and supported investment when private demand "went through the floor as a result of the global recession".
"There are tradies all over the country who are working on stimulus projects. It's adding to confidence in a way that we don't see anywhere else in the world," Mr Swan told the Fairfax radio network on Tuesday.
"I think Mr Hockey ought to at least acknowledge that the stimulus package has done good things for this country, and it's meant that we're one of only two advanced economies that grew in the March quarter.
"He just ought to be man enough to acknowledge it."

Later in the day, Opposition spokesman for the Disabled, Senator Mitch Fifeld said that Swan should apologise for the insensitive comments about people with disabilities. Sigh. Yes apparently you can no longer say that someone who refuses to see or hear evidence is blind or deaf. At this rate, the metaphor is close to being as dead as the bump in AFL.

Ok, maybe he shouldn’t have said “dumb” (it’s just not accurate – no one has ever suggested Hockey has any problems talking), but I suspect Swan (who apologised if anyone took offence – which I seriously doubt) must be a bit of a fan of The Who and was thinking of the line from their Rock Opera Tommy, and the deaf, dumb and blind kid who “sure plays a mean pinball” (and who also plays by sense of smell…)

When the national accounts come out tomorrow, we’ll see a continuation of these bizarre political days where the opposition will be hoping for a strong increase in GDP growth, and the Government will be kinda hoping for a small increase (if any). The Government of course won’t mind too much a strong GDP growth – it will take all the credit, and it is a pretty easy story to sell – it just means that they’ll have to reconsider the stimulus and counter the opposition’s attack that the stimulus isn’t needed. A weak GDP growth figure on the other hand shows Turnbull and Hockey to have been far too bold in their predictions of the growth of the economy and also gives them greater strength to their argument for continuing the stimulus, thus it is an easier sell for them. 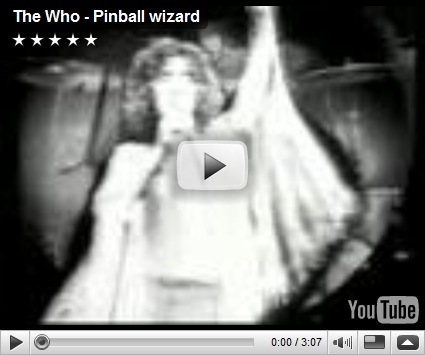