Well that was a shock! So much for economists thinking the GDP growth might be nil to slight. A 0.6% rise in a quarter is positively booming (well relatively so).

Here’s a graph of the GDP growth of the world economy by quarter since the start of 2007: 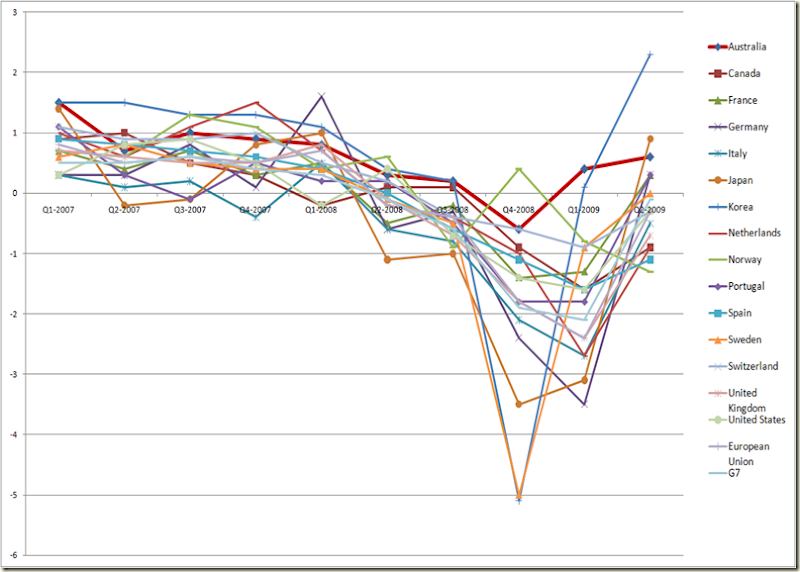 What it shows (and I admit it’s a bit confused), is that around the middle of 2008 pretty much everyone started heading south. Some parts of the world really went off the cliff – Japan, Korea and Sweden more than most.

Australia went down by a bit, but by the 1st quarter of 2009 we were kicking arse and taking names macroeconomicaly speaking.

In the second quarter, the rest of the world started slowly to catch up; but while South Korea has got some serious economic steroids, and Japan is also getting going, by and large most of the world is still going backwards (only less so than they were 3 months ago).

So when the GDP figures came out today, it was pretty obvious that Wayne Swan was going to be pretty happy, and was also going to take most of the credit. And indeed he did.

He also went straight onto the front foot by pointedly repeating (and repeating) that any calls to wind back the stimulus would be akin to “pulling the rug out from under the economy”. He does have a point – the economy is growing, but it is a tad early to say things are booming along nicely and that we can all put our feet up and wonder what all the fuss was about.

Yesterday the Wall Street Journal wrote that there were worries in the US about the performance of a large number of banks. As AM reports:

the federal deposit insurance corporation, the FDIC, which guarantees deposits, has 416 banks on its problem list - an increase of 109 troubled banks from three months earlier. The Journal also wrote in its editorial that the FDIC has a mere $10.5 billion in reserves to guarantee $4.5 trillion in bank deposits. The paper says American taxpayers better get ready for another bailout - this time for deposit insurance.

To give an indication of how fragile things are in the US, last Friday 3 banks failed, bringing the total to 84 so far this year, as the banking industry grapples with deteriorating loans. That compares to a total of 25 bank failures last year and only three in all of 2007.

So on one day last week as many banks failed as in all of 2007, and the FIDC is still worried about 416 others! (No wonder the Dow Jones Index went down the last couple of days).

So the smart move seems to be hold the course, keep the stimulus going just in case the US and other fall again – especially as the remaining stimulus is pretty much all the relatively non-inflationary infrastructure and building (no one is suggesting we need another cash handout).

Joe Hockey was given the unenviable task of talking up the Opposition’s line of opposing the stimulus (which we can now see has worked) and trying to explain that the stimulus which kept Australia out of recession was poorly targeted. It was obviously too big a task for Malcolm Turnbull, because he wasn’t sighted today. Poor Joe did a quick doorstop interview where he said:

… if you throw enough money at a problem some of it will stick. The economy's resilience is due to the good state the Coalition left it in before the global crisis hit. Today is a warning bell for Mr Rudd - stop spending so much money otherwise we are going to end up with higher interest rates and higher taxes.

He kept to the line, but it didn’t sound too convincing. This year Hockey and Turnbull and other in the Liberal Party have used the phrase “Rudd recession” 25 times in Parliament. They were positive that the economy would go negative. That debate is now over, and it all sounds a bit foolish.

The Liberal Party are now reduced to arguing that the debt accumulated due to the stimulus wasn’t worth keeping Australia out of recession. It’s a tough argument to sell. It is highly unlikely interest rates will go up to the levels they were at the time of the last election, and so the “cost” of the stimulus is going to pretty ephemeral to most people. It’s one thing to talk about debt, it’s another for people to actually feel the impact.

And when it comes to economic selling points, as with medical conditions, people generally only get worried when they can feel something.

GDP growth? Well it looks likely that it’s going to be a lump felt by the opposition from now till election day, and you can bet neither Swan nor Rudd will take pity and cut it out for them.