Flick of the Week: “Real diamonds! They must be worth their weight in gold!”

This week’s Flick of the Week takes us with Billy Wilder from Witness for the Prosecution to the greatest comedy film of all-time – Some Like it Hot.

When it comes to discussing the greatest director in history, Billy Wilder has to be included in the conversation. In fact, in terms of breadth of scale, he pretty much has everyone else covered. Check out this list of films: Double Indemnity (film noir), The Lost Weekend (drama), Sunset Blvd (savage attack on Hollywood), Ace in the Hole (even more savage attack on the media), Stalag 17 (WWII flick), Sabrina and The Seven Year Itch (romantic comedy), Witness for the Prosecution (whodunnit), Some Like it Hot (comedy), The Apartment (comedy/drama). Every single one is a classic, and many provide cinema with some of its most iconic images and lines (of which he also wrote – he wrote or co-wrote all his films). He was nominated for an Oscar as a director, producer or writer 21 times, and he won six.

Of living directors, perhaps only Spielberg and Scorsese perhaps can hold a candle to him – and yet neither does comedy very well – and would you pay to see a Scorsese or Spielberg romantic comedy? Spielberg tried with Always in 1989 and has since left the genre very well alone. Scorsese has never gone there. And of course neither of those two giants write their own screenplays (though Scorsese occasionally gets a writing credit)

Some Like it Hot is easily my favourite comedy. The story set in the 1920s, of two out of work musicians Jerry and Joe (Jack Lemmon and Tony Curtis) who after witnessing the Valentine Day Massacre flee Chicago for Miami disguised as women in an all-female band – which includes singer Sugar Kane (Marilyn Monroe) – is pure genius. Genius because it could have all been so terribly bad. Drag comedy more often than not ends up being “Sorority Boys”, but this works because of a number of reasons that ensured the pieces gelled perfectly.

First, the film is set in the past – so the costumes were able to be more prim and conservative than those of 1959. Second Wilder shot it in black and white (this was crucial) the lack of colours helps disguise the two lead men, and also ensures there is no sense of garish drag queenness about their appearance. Third, the writing is incredible – Wilder and I.A.L. Diamond screenplay is bursting with zingers and quips:
Sugar: I come from this musical family. My mother is a piano teacher and my father was a conductor.
Joe: Where did he conduct?
Sugar: On the Baltimore and Ohio.

But lastly, the most important aspect of the film is the cast. Lemmon, Curtis and Monroe give a master class in comedy acting. The stories about Monroe’s antics and anxieties while filming this are legendary. She was so nervous and out of it, that many of her scenes are shot in close up because they were done with her alone and just Wilder there to direct rather than acting with either Curtis or Lemmon. My favourite story is that she was having so much trouble in one scene which required her coming into a room and opening a drawer and asking “Where’s the bourbon” that Wilder decide to tape the line on the bottom of the drawer; and then on the next take she came into the room and opened the wrong drawer. 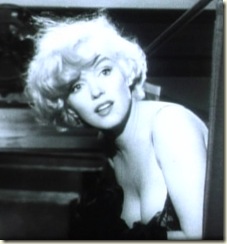 But here’s the thing – you wouldn’t know. She is beguiling, sexy, funny, sweet… heck she is Marilyn Monroe. Forget The Seven Year Itch and her dress getting blown up by the subway vent, if you want to see why Marilyn is still known 47 years after her death as “Marilyn” see this film – and especially watch her perform “I Wanna Be Loved By You” (below) and “Running Wild”. You’ll understand why JFK was prepared to risk his Presidency for her.

As great as she is (and I think she deserves the Oscar for Best Actress for the performance), she is nothing next to Lemmon and Curtis. The two pull out all the stops and bounce lines back and forth off of each other like they have been best friends for years. Neither of them are all that successful at convincing you they are female, but ironically it doesn’t matter (this is a comedy after all), but they are brilliant at conveying the difficulties men would have conducting such a ruse (especially when surrounded by so many attractive and single women). Lemmon as “Daphne” goes fully into the role of a female – and spends almost all of the film after donning the disguise as his female alter ego – he comes to appreciate the difficulties – but also the safety – of being a female at the time. For a guy who has been struggling to pay the bills and is now being chased by violent gangsters, it is little wonder that his character Jerry would feel comfort in his role as a woman being wooed by a millionaire.

And despite opening up this side of the role, Lemmon never forgets the comedic aspect or his comic timing, such as when he is giving some advice to Sugar: “Now, if I were a girl – and I am…”. It is a particular achievement that his character is able to accept a proposal of marriage to a man, and yet he never falls into the “mincing gay” stereotype – in fact his acceptance almost has a ring of logic to it. It is one of the great film performances of all time, and shamefully got beat for the Oscar by Charlton Heston in Ben Hur!

Curtis’s character Joe on the other hand quickly adopts another disguise in an attempt to seduce Sugar – he pretends to be a millionaire and puts on the Cary Grant impersonation to end all Cary Grant impersonations – in fact when people do a Cary Grant voice, they are more likely doing a Curtis-does-Grant voice. The oft quoted comment from him was that kissing Marilyn was like kissing Hitler, though since then he has retracted the statement, and it had more to do with the frustrations of working with her than the actual kissing. So fragile was Marilyn’s mood that Wilder had to use whichever take she was best in, meaning Curtis and Lemmon had to be good every take in case that was the one Marilyn nailed.

Since its release, the film has only grown in stature. The only Oscar it won was for Best Costume, as that was the Year Ben-Hur won everything. Were that year’s award revoted now, that situation would be reversed – it is almost inconceivable to think this would not win Best Picture now (and pretty much everything else). In 2000, the American Film Institute named it the All-time Best Comedy (coincidentally the other great male-disguised-as-female comedy Tootsie came second).

I agree with them.

'Aww, you tore off one of my chests!'

One of my favourite movies, of all time. And what a closing line!

'Spills, thrills, laughs, and games. This may even turn out to be a surprise party!'

I'm a huge Marilyn fan, but Jack Lemmon is the GOLD in this.