Flick of the Week: “I am constantly surprised that women's hats do not provoke more murders”.

Having been in Adelaide today and was flying back home during Question Time, I’ll leave On the QT till tomorrow and instead get around to doing a A Flick of the Week (which I must admit is struggling to live up to its name given the rare times I get around to writing one).

This week’s Flick of the Week takes us with the great German singer, actress, entertainer, Marlene Dietrich from Touch of Evil to the film she made immediately prior to that, the adaptation of the Agatha Christie play, by director Billy Wilder, Witness for the Prosecution.

I have to admit not having seen this film for many a year. I’d venture it has been well over a decade, and given I can get it from Amazon for $12 I should put in an order. Despite (or perhaps because of ) the time since I last saw it, I have to say this is an old favourite. It is a great courtroom drama – in fact as it was made before Inherit the Wind, To Kill a Mockingbird, Judgment at Nuremburg, and Anatomy of a Murder it is really the Granddaddy of all courtroom movies – that puts a primacy on keeping the viewer guessing and entertained. In a world of Law and Order: Adnauseum it is nothing new to have courtroom scenes with surprise evidence, and witnesses being economical with the truth, and so we may feel inured to all attempts at surprise from the courtroom – unless it involves even more shocking revelations “that will make you question humanity” (as often seems to be the case on the Law and Order shows). But Agatha Christie is not of that school. She was making people guess whodunit before dun knew who it was.

The plot involves eminent barrister, Sir Wilfred Roberts (Charles Laughton) , who is recovering from a heart attack, taking on the case of Leonard Vole (Tyrone Powell) accused of murdering the rich, elderly Mrs French (the motive being that she had recently changed her will to leave him the majority of her estate). But those are just the bare bones of the story that leads back to post wartime Berlin, includes bigamy, disguise, double cross upon double cross, and brandy in a cocoa thermos.

Marlene Dietrich plays Vole’s German wife, and she give a tour de force performance. She would only appear in only two more American films (Touch of Evil and Judgement at Nuremburg), and if you’ve ever wondered what the fuss about her was, this is the film to see – she not only acts, but she also has a scene singing in a German nightclub where she gets to show off her famous legs.

Charles Laughton though is the frame on which Wilder drapes his film. The dialogue by Wilder and Harry Kurnitz is (as is always the case with a Wilder film) sumptuously witty, and Laughton absolutely eats it up. He delivers his courtroom scenes in a manner that has you deciding he is the only man you would want defending your life, but also wonderful is his interplay with his nurse which is done in a brilliantly irascible manner.

The film was nominated for six Oscars, but won none (Bridge on the River Kwai was the film that year). It famously ended with the line:

The management of this theatre suggests that for the greater entertainment of your friends who have not yet seen the picture, you will not divulge the secret of the ending of Witness for the Prosecution.

And in that spirit, I will not reveal any more of the plot, except only to say that unlike a number of twisty, plot driven films, this one is enjoyable to watch even if you do know the ending. 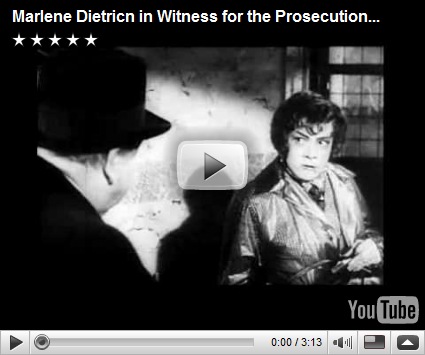