Day Fifteen: Or we're nearly there.

I was out most of today so I missed Ken Wallace's gold medal Kayak paddle. And I have to say, I didn't really care.

I think I'm over these games; over the coverage, over the bloated program and number of sports that I have to care about for two weeks, and promptly forget about. Bring on the World Athletics Championships next year in Berlin, which will be telecast by SBS, and not include anything but sport.

Tonight's athletics is all finals; and they're some of the big events of the program:

The women's high jump. Should be all Blanka all the time.

The men's javelin. Australian Jarrod Bannister is a big show for a medal, and a realistic chance for Gold. He actually has the best throw of the year. This would be an astonishing victory for a nation that has no history of javelin throwing (at least in the men's). So be sure to stay up for Channel 7's recap.

The Men's 800m Final: Perhaps the hardest event on the track. 800m runners must have the endurance of a 1500m runner, but need the speed of a 400m sprinter. I think Wilfred Bungei has look ed the best through the 2 rounds, and it would be great to see him get over the line for a win on the big stage after a long run of missing out when it most matters.

The women's 1500m final. No Australian runner, which is greatly disappointing. Sarah Jameison is certainly good enough to be here, but wasn't good enough in the semi final. I'll tip Yusuf Jamal of Bahrain.

The men's 5000m final. Again no Australian; as above for Craig Mottram. Can;t see anyone getting past Kenenisa Bekele to replicate the performance of countrywomen Tirunesh Dibaba and take out the 10k 5k double (and become the first man to achieve the feet since Miruts (the Shifter) Yifter in Moscow).

The 4x400m finals. Men - USA to win. Australia to either bronze or 4th depending on baton drops. The women will also be won by the USA.

The women's basketball final. I am prepared to bet this will be shown live. I haven;t seen any of the USA women's matches so I have no idea how they are going. I really don't follow basketball at all, so my tip either way would be based on nothing except an unrestrained need to pick a winner in everything and anything. So go Australia. Hope the Opals kill them.
***
9:37pm: I love Channel 7, they don't show the actual competition live, but they make sure the medal ceremony is. Bravo.

The Javelin comp is already underway; Bannister is 4th after the first round.
***
Men's 800m final. At the Olympics this can sometimes be run in a dawdle and it comes down to who can run the last 150m the quickest. I think though there are enough in this field who would prefer a fast pace. Here's hoping.

My late mail: Kenya to go 1-2. Yego to come second... (this has actually already been run, (of course it has! but I'm not going to look).

Oh yes! Great strong run front running by Bungei. Yego third (so my late mail wasn't too bad).
***
The highpoint of the coverage occurred today at around 5pm: both SBS and Channel 7 had the synchronized swimming going - SBS of course had it live; Channel 7 delayed. sigh.
***
9:50pm: Bannister is still 4th after the second round.

Women's 1500m final (it truly is a great night of athletics). Is it live? (if you have to ask...) Listen to ABC radio if you want live. TV is up to that level of technology yet.

9:53pm: Bannister back to 5th after 3 rounds. The leader if Thorkildsen (the favourite) from Norway, then 3 throwers from Finland. (You might have gathered the Scandinavians like the javelin).

Great run by Lagat to win the 1500m. Amazingly it's the first female Kenyan to win the 1500m. My tip Jamal just went 100m to early and blew up in the straight.
***
As we get ready for the men's 5000m, check out this pic of Michael Phelps on the cover of Sport Illustrated. I make no comment, other than if the rumours are true, my God, Stephanie, you can do better!
***
10:08pm: Channel 7 are showing us Bannister's first throw. In the real world he has just fouled his 4th. (stays in 5th).
***
10:10pm: The 5k is off to a slow start... in the background you can see the high jumpers, and also hear the crowd getting excited about someone's javelin throw... sigh.

Bekele really needs to make sure he doesn't have to beat Lagat over the last 200m. He tried that in Athens against El Guerrouj and failed (though Lagat isn't in his class, but a miler will always beat a 10k runner in a sprint)..

Wow. Just wow. Bekele is the greatest 5k and 10k runner of all time. Put down your glasses no need to look any further. He ran the last mile in under 4 minutes. Just brilliant.

He now equals Zatopek who won gold in the 10k and silver in the 5k in London, and then gold in both in Helsinki. (So all Bekele has to do now is front up tomorrow morning and win the marathon....)

In the high jump 4 women are clear at 1.96 with no misses (Blanka among them), and 5 more have cleared it with a miss or two.

In the javelin, Bannister fouled his last throw, and finishes 6th. (so don't expect to see any of it).
***
10:30pm: Let's go live to the diving! Well no, but hey, it's only delayed by a bit 20 minutes or so. And look, I realise they can't possibly show everything live. But that's the bloody point. Either go in with another channel, or at the very least stream everything live on the web.

Wow, a Stephanie Rice memorabilia photograph, beautifully framed and signed. Guaranteed to halve in value by the end of the week, get in while stocks last (remember it's a limited edition... limited to the number they can flog off to gullible fools).
***
10:38pm: Channel 7 are obviously worried the athletes will have multiple wardrobe malfunctions, it's the only reason I can think of them showing everything delayed by at least a minute.

Good run by the USA women, especially my favourite, Allyson Felix. Have to agree with Raelene Bolye - Felix should run 400m, and give up trying to run 100m .

In the high jump Blanka has taken the lead - the only one to clear 1.99m on the first attempt. Six women are left in the field.... 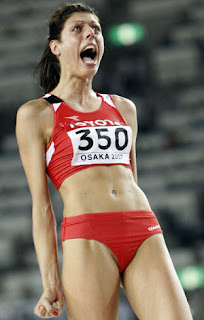 10:53pm: 4 clear at 2.01m (Blanka did it without a miss). Oh please Channel 7, answer my prayers; show us some rhythmic gymnastics.... yes!!! I mean geez, yes it looks lovely, and is probably bloody hard... but it's not live, there aren't any Australians in it...so take us to the athletics.

Over at the diving, Matthew Mitcham is in 3rd place after 4 rounds (5 points behind 2nd, and 26 points behind 1st - but both 1str and 2nd are Chinese, so don't expect him to get in front of them...)

11:01pm: Men's 4x400m final is actually being shown live. Praise be, the last track event of the program and they finally get it right! C'mon Aussies...

Australia run the second fastest time ever for us, but are way back (the world has moved on and we haven't...and boy doesn't Raelene Boyle have it in for Steffensen and Hill...).

Over at the high jump, only three women are left. Blanka went clear at 2.03m; Anna Chicherova of Russia also went over without a miss (but she has had 3 misses along the way); Belgium Hellebaut took two jumps to clear 2.03m. Blanka is the only one of the 3 to have ever jumped higher...

Oh wow! Hellebaut cleared 2.05 on her first go!!! and Blanka needed 2 jumps. So Hellebaut goes into the lead. The Russian misses so it's down to two.

That's a good note to end on (Blanka not withstanding, but I'll cope... eventually...). Tomorrow is the men's marathon, and my montage blog of these great slow motion Games.

liked the link to the article by the table tennis player about the amount of sex that goes on in the village, especially liked the fact that even a table tennis player considers Phelps to be a geek.
great win by Hooker in the pole vault, however brickbat again to the ch7 interview they did with him, especially in relation to Rebecca Wilson, who was quite condescending implying Hooker had fluked it from nowhere, at which point Ovett? piped up to explain this guy didn't just walk off the street and decide to have a go at the event with the big stick