Most of my “I wish I was there” moments are about greatness in sport –Nurmi, Elliott; or great moments like the Mexico Games black power salute.

But this one is about a shitty moment in sport, that was a harbinger of things to come, and is made even more shitty for me because it denied Australia a great champion.

In 1968, at the age of 17, Raelene Boyle came 4th in the Olympic 100m and won silver in the 200m at Mexico City. For years later in Munich she was ready to win gold and take the mantle of Golden Girl from Betty Cuthbert. She was tough as they come, and not known for cracking in big events (she won three Gold at the 1970 Commonwealth Games – at the age of 19!). It was her time.

Let’s not beat around the shrubbery here: they cheated. The women were doped up – Stecher’s steroid was Oral-Turinabol.

With the advantage of steroids Stecher won the 100m and the 200m. Raelene Boyle running with the aid of dencorub won Silver in both.

After 1989 records of the East German doping system was revealed. There is no doubt that Stecher was on the gear. No one doubts it; no one questions it (there are no steroid deniers!). And yet Raelene Boyle is still the Silver medallist, and if you buy David Wallechinsky’s The Complete Book of the Summer Olympics, Stecher is still down as Gold medallist. Why? The IOC has an 8 year rule – i.e once 8 years has past the results stay regardless of evidence. Also the IOC only banned steroids in 1975.

Now I know these women were not given a lot of say – and the doctors and sports administrators are truly the ones to blame. But there is enough evidence to suggest that many of these women knew what was happening and didn’t care. By the 1980s Marita Koch the current holder of the women’s 400m world record was complaining that she 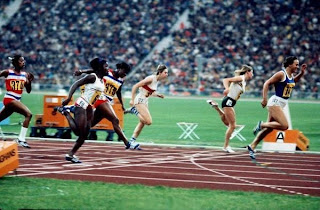 That’s six of the current world records for women being set in 1988. Talk about a talent spike!

Yep, women have not been able to improve in 20 years. Bollocks.

I love athletics, and so for that reason alone I would have loved to have been in Munich that Saturday – if only to cheer for Raelene Boyle, and to scream at the top of my lungs in an effort to make sure everyone in the stadium knew she was beaten by a cheat.

Just imagine, she would’ve been done the Women’s 100m and 200m double - up there with Fanny Blankers-Koen, Marjorie Jackson, Betty Cuthbert, and Wilma Rudolph. The giants of the sport.

You know who are the only women to have done the double since 1972? Florence Griffith-Joyner and Marion Jones.
Posted by Greg Jericho at 1:13 AM

So true... and so sad...even upsetting. Boyle was very unlucky in her career..but I bet she would say she was lucky in her battle with cancer. She is a survivor.