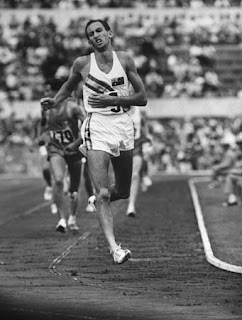 Rome, Tuesday 6 September 1960. Elliott achieves perfection.
For me the highlight of the Olympic track and field program is the Men’s 1500m. Now I know most call the 100m the Blue Riband (or "Blue Ribbon" if you want to use the Americanised version) event, but traditionally it was the Mile or 1500m, and for me it remains thus.
There have been numerous fast middle distance runners, but to be classed as truly great you must win the Olympic 1500m. Jim Ryan, who held the world Mile and 1500m world records couldn’t do it, likewise Steve Ovett (though he did win the 800m in Moscow), more recently Hicham El Guerrouj, possibly the greatest of all time, needed to win in Athens to cement his place in the pantheon – had he not he would have gone down in history as merely a great record breaker, but not a true champion.
Herb Elliott, was 22 years old when he toed the line at the start of the 1500m final at the Rome Olympics. He had only seriously been competing for 3 years. He had been a promising junior athlete, but gave up in 1955 due to a foot injury sustained while shifting a piano (yep that’d do it!). Fortunately the Olympics in 1956 were held in Australia, and Eliott’s desire to run was reignited after visiting Melbourne during the Games. He moved from his home in Perth to Melbourne and began training under the mercurial (code for complete nutter) Percy Cerutty, and in 1957 began his senior athletic career.
From 1957 till he retired in 1961 he ran in 42 races over the Mile or 1500m. He won them all.
He broke the Mile and 1500m world records in 1958 and also won the 880 yards and Mile events at the Empire Games in Cardiff (the forerunner to the Commonwealth Games – they liked to use imperial distances back then).
By the time 1960 came round, Elliott was as prohibitive a favourite as you could get.
The race went pretty much as planned; Elliott settling in just behind the lead. Then with 500m to go Elliott began his kick for home. Rounding the final bend with 200m he saw Cerruty frantically waving a white towel in a pre-arranged signal to let Elliot know he was on world record pace. However, Elliott forgot what it was meant to signal, and thought it meant someone was closing on his shoulder – he kicked even more furiously. In reality, there was no one on his shoulder.
Watch this great clip from the Bud Greenspan documentary narrated by the mellifluous David Perry and with Elliott describing the race. It contains the line “with 100m left, Herb Elliott is all alone”; which says it all really. He would win by around 20 metres, in 3:35.6 breaking his own world record, the TV camera unable to zoom out wide enough to show second.


David Wallechinsky writes that Silver medallist Michel Jazy claimed that he was the first man to cross the finish line: “Elliott was a being from another planet”.
Sometimes the Olympics are fantastic to watch because of the great competition – races decided by the smallest of margins; goals scored in the last seconds – or because of great upsets. But on this day how great would it have been to witness the very best 1500m runner the world had ever seen running the very best 1500m the world had ever seen?
So fast was Elliott’s time that only six Australians since then have bettered it. It is still a time fast enough to meet the A Qualifying standard for the Beijing Olympics of 3:36.6.
Elliott retired soon after mostly because there was nothing left to achieve – you don’t better perfection.
Posted by Greg Jericho at 3:46 PM