I am not one of those people who thinks it’s unfair that there are no Australian men running in the 100m – run the qualifying time, finish in the top three in the trials, and stop your whining. I also have no time for athletes like Eric Moussambani (Erik the eel) who swam for Equatorial Guinea at the Sydney Games and did the 100m freestyle a minute slower than the rest of the field. When some misty-eyed commentator marvels at how such an athlete represents the true meaning of the Games, I think, spare me: Lewis, Owens, Nurmi, Zatopek, Spitz, Cuthbert, Fraser, Thorpe represent the Games.

The Olympics are about the best competing against the best. Erik the eel no more represents the Games than does the athlete who isn’t good enough to qualify for his event.

But the Games are not all about winning. My favourite runner of the 90s was the Danish 800m runner Wilson Kipketer. He is the current world record holder, was 3 times world champion, but could only get silver at the Sydney Games (he couldn’t run in Atlanta when at his peak because he was still waiting to gain Danish citizenship after leaving Kenya). I was in the stadium for the 800m final in Sydney, and was probably one of the few in the crowd shattered by the result (still glad I was there though).

Ron Clarke was perhaps Australia’s greatest track runner – in 1965 he broke 12 world records in 44 days – but the best he could do was a bronze in the Tokyo 10,000m. Such losses are as much a part of the Games as the triumphs of Nurmi and Zatopek. No one, no matter how much a favourite is guaranteed a win at the Olympics. And as they come around just once every 4 years, you know there will be more disappointment than there will be joy. And the disappointments will often define the Games.

I didn’t watch much of the Barcelona Games. Most likely this was due to the time difference, so I don’t actually remember seeing this event; it really came to prominence a few years later when the IOC included it in a series of commercials to publicize the Olympics – I think VISA used it as well. It is however, a moment I would have definitely loved to have been there for.

It’s not a final; just a semi-final. It concerns not a world record holder denied, just a journeyman who looks like he’s come good, and maybe will be good enough to challenge for a medal.

Derek Redmond of Great Britain had been selected in the 400m at Seoul four years earlier, but pulled out 90 minutes beforehand with a hamstring problem. Over the next four years he would have eight operations to repair various tears, strains and rips in his legs.

On this day he is one of the fastest qualifiers from the quarter finals. He starts 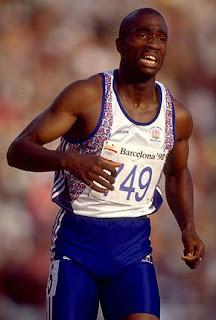 well, down the back-strait he is running well, comfortable, well positioned. Then with 200m to go his hamstring tears once again, and he crumples on the track.

The other runners go on, rounding the bend and sprinting to the finish. Redmond stays crumpled on the track.

And then he gets up.

Now I once tore my calf muscle, and I swear I thought I had broken my leg. Tearing a hamstring is generally accompanied by a ping or crack of the muscle ripping. It is not a subtle injury: it takes away your leg from under you.

But Redmond gets up and tries to run. He hobbles on fending off officials. As he rounds the bend a figure comes running onto the track. The officials in vain try to stop him from reaching Redmond.

It is his dad.

With 100m to go he catches up to Derek; puts his arm around him, and tells him he doesn’t need to go on. Then, as Redmond tells it: “When my dad told me I didn't need to do this, I told him just to help me get back into my correct lane. In that case, he said, we would finish the race together”.

The moment is beautiful. I am glad I love sport, and am able to put my usual cynicism to one side, and embrace this moment. I cannot describe it better than the actual video of it – just watch it and see.

At their best, they are life encapsulated into a contest – full of cheats, good guys, braggarts, chokers, jokers, losers and champions.