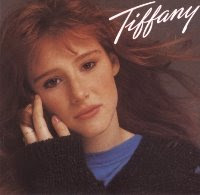 I haven't done a "Song of the Year" for a while, most likely because 1987 was next, and I wanted to put off admitting that for most of that year, and a goodly portion of 1988, I was madly besotted with teen pop "sensation" Tiffany.

Tiffany and I were meant to be. Ok I didn't write her name on my pencil case (a bit too girly a thing to do really) but I did have a poster of her on the inside of the door of my school locker.

The reason is pretty simple - she was the first pop star who was roughly my age. Madonna of course was decades too old, even home grown Kylie Minogue was 4 years older. Tiffany on the other hand was the same age (for part of the year) and thus it was no mere pipe dream; all that was needed was for me to somehow meet up with her and bada bing bada boom... ah geez, youth. You gotta love it.

Fact is, I liked the song as well. A cover of a song by a band no one had ever heard of (Tommy James and the Shondells??), it was reworked into a perfect late 1980s beat, with a video that screams late 1980s louder than someone standing on the top of a hill wearing legwarmers over her acid wash jeans with about a hundred bracelets on her wrists and wearing a jumper over the top of a shirt that isn't tucked in with a ponytail on the side of her head screaming at the top of her lungs, while looking at the time on her Swatch watch, "I am from the 1980s!!!"

Tiffany loved the mall, and the mall loved her back.

Sadly the love was short lived (for those few fly by night fans). I lasted through to her second album, featuring such great hits as... err... "Hold an Old Friend's Hand" anyone???. OK it wasn't great. And perhaps I should have been awake to her limited ability given the worst ever cover of a Beatles song "I Saw Him Standing There" on her first album.

But still, when you're 16 you're allowed to fall in love with a bad pop star. Could've been (now there is a great song) worse - I could have liked Debbie Gibson.

In 2002 she belatedly answered my teenage boy wish and posed in Playboy. And with the sounds of J Geils Band going through my head, I went into the newsagency to sneak a look. Sigh, sometimes it's best not to try to return to your youth.

The great thing about Tiffany and her video is like all good things from the 80s, it is ripe for parody. The great show, How I Met Your Mother, came up with the fantastic Robin Sparkles singing "Let's Go to the Mall (Today)". It is perfect - almost as good as the parody videos from the Hugh Grant film Music and Lyrics.

Hi! Did you see Lawrence Leung's Choose Your Own Adventure show on ABC last night? Think it's replayed tonight on ABC 2, but he met his childhood idol...Tiffany!