When I became a reader of fiction

When I was 10, I enjoyed reading, but most of my literary viewing was related to reading books about World War II, encyclopedias (I love general knowledge) and Asterix comics. I hardly read novels. I had a few Famous Five and Hardy Boys books, but mostly any fiction reading was certainly in the"children's section" and pretty lightweight. For me non-fiction was the truth. 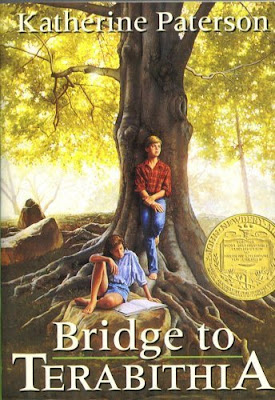 Then a friend of mine gave me a book to read: Bridge to Terabithia by Katherine Patterson.
The story spoke to me from page one. It is about a boy, Jesse, who wants to be the fastest runner in his grade. As a kid who loved athletics, I was able to see myself in him in a way never possible with any of the Famous Five boys, or the brothers Hardy.
A girl arrives in the town, Leslie, and it turns out she is good at running, in fact she is the fastest kid in their grade. Jesse and Leslie become friends and once again the friendship was easy for me to relate to - as I was always one of the boys who seemingly was destined to be the "best friend" rather than boy friend (suffice to say when I saw Pretty In Pink I was cheering for Duckie). The pair venture into the woods near their houses and in a place accessible only by swinging on a rope over a creek they create a magical world called Terabithia where they rule as king and queen.
And then at the end of the chapter titled "The Perfect Day" my world changed.
After a truly perfect day for Jesse he comes home and is told that Leslie has died after the rope across the creek broke while she was swinging on it, and she has drowned in the flooded creek.
Well that was it. For the first time ever a book was making me cry. And not just cry, but flat out bawling. Even now I can remember it, and remember thinking what the hell is going on? (and also why the hell did my friend give me this stupid book!)
Who knew that books could stir such emotions? Who knew that stories weren't just about solving mysteries or learning information that would be of great use in future games of Trivial Pursuit?
From then on, I wanted fiction.
True it took a while to fully germinate; but the seed was planted and it was only a matter of time from then on. I recall reading that year an excerpt from Oliver Twist as part of a reading comprehension test, and the words of Dickens describing the vendors shouting "thief" and chasing after Oliver stayed with me, as I knew once again that there was something amazing about great fiction. And when I finally read that novel some 6 years later I felt an excited chill when I got to that passage and realised I had waited far too long.
I have never read Bridge to Terabithia since. Its impact was so great that I don't think I could have coped with it again. I haven't seen the movie version either, because it will never match my memory of it as a 10 year old. In fact I have forgotten most of the book. Pretty much all I remember is the first couple chapters and then Leslie dying. When the movie came out I realised I couldn't even remember what Terabithia was.
To be honest this is a common occurrence with me. For example I studied Mill on the Floss at uni - so I would have read it at least twice, and yet for the life of me I can't remember the plot. To be honest even books I love I often forget the endings or parts of the plot - One Hundred Years of Solitude is one of my favourite books of all time, and yet I can only recall the "vibe" and vague bones of the story. The ending? You got me. I'll have to read it again (he says adding it to the long list of "must read again" novels).
One thing that I have read since then are books that bring out the tears in me. I am a hopeless sentimentalist for these things. Heck I even cried when David's wife Dora and annoying dog Jip die in David Copperfield - and I hated Dora and that bloody mutt!
I don't generally get too flooded with tears at love (so Jane Austen leaves me dry eyed - though in raptures at her genius), death seems to be the trigger for me - most likely due to that first instance in Terabithia.
Only one other death in literature though has really affected me as much as that of Leslie's and it was a death I knew was coming, and thought there was nothing to worry about. It was in Victor Hugo's massive tome Les Miserables.
Having seen the musical I knew that the poor pathetic Eponine, despite her deep longing, her deep hope and desire, was destined never to be loved by oblivious Marius, and I knew she was destined to die doing the completely selfless act of delivering a message from him to his beloved Cosette. And more than that, I knew that she would die in his arms, having been shot trying to get back to the barricades.
So all was prepared, I knew the songs, I knew the scene, I was going to be strong. And then I turned the page and read about this girl who her whole adult life had wanted nothing other than love from the man in whose arms she now was:
She let her head fall back on his knees; her lids fluttered, and then she was motionless. He thought that the sad soul had left her. But then, when he thought it was all over, she slowly opened her eyes that were now deep with the shadow of death, and said in a voice so sweet that it seemed already to come from another world.
'You know, Monsieur Marius, I think I was a little bit in love with you.'
She tried to smile, and died.
Fiction my friends is a wonderful and powerful thing - and when it's at its best, it is the truth.
Posted by Greg Jericho at 8:11 PM

Love this.
My life is like a journey with books to have those emotions evoked again and again.