On the QT: Is it still March?

The First Question Time of the winter sittings is always a bit of an odd affair. As it is on Budget Day, the opposition knows full well that anything that gets asked or said will not rate a mention in the next day’s papers, and the issue of economics is really brought up in real terms as the Treasurer is busy in the press gallery lock-up, and any other questions will be fobbed off in “wait till 7:30pm terms”. Apparently this was a “torrid” Question Time, though having watched a few of them, and given that torrid implies some heat, I can say I thought this was a rather luke-warm affair.

You would think the opposition would have been full of vim and vigour given the recent polls showing them at 50-50 with the Government. Instead what we saw was a back to March type session, where the opposition's questions were a scattershot attack, and Rudd was taking Dorothy Dixers on health and the economy. 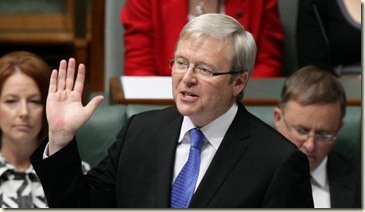 I was expecting the Opposition to be full of voice – shouting at Rudd to call an election. I was expecting question after question talking about lack of guts etc etc. Instead the first question to Rudd from Abbott was on the Resources Super Profits Tax and the miners, based on Xstrata’s claim today suspending an exploration project. If this question is any guide, we can count of Abbott using any claims by the miners as basis for questions. And if Rudd’s response is any guide, he is not going to be one bit troubled.

Julie Bishop then rose to ask if Rudd was considering levying a Super Profits Tax on other industries that earned profits in excess of 6%. It was a typical Julie Bishop delivery – straight, with no swing, nor any movement off the pitch. Rudd dispatched it to the boundary with ease.

The most exciting the proceeding got in the early stages was when in response to a Dorothy Dixer on the economy, Rudd said that “This Government has become a friend of small business”. I don’t think he was meaning to imply it hadn’t previously been on friendly terms, but whatever, the opposition didn’t like it, and it finally brought them to life. Unfortunately up next was Chainsaw Macfarlane who laboriously asked a question that seemed to have something with the terms of reference of the consultation with the mining companies for the RSPT (or something, I got a bit lost trying to follow it). It was hardly the pressing issue of the RSPT – or if it was he totally confused it all.

By this time Rudd was able to stand at the non-scorers end while the Minister for Resources and Energy, Marn Fersn took the striker’s end to face up to a Dorothy Dixer on the Strayun Minng Indstry, and the cmplx issue of cnslttshun.

God bless Marn. Question Time would be poorer without him and his lack of vowels.

After another pedestrian delivery by Warren Truss (has there ever been any other kind of deliver by Truss?) Tony Abbott took to the greatest moral challenge of our time – climate change. You would think given the dumping of the ETS has perhaps caused the most damage to the Rudd brand, that he would be somewhat trepidatious in this issue – not at all. He skipped down the pitch and belted it for six. The reason why is Tony Abbott himself. Abbott’s question on climate change and Rudd’s back down on the ETS would carry some weight if Abbott hadn’t been the one who caused the ETS to be defeated, and if he hadn’t last week told a group of Primary School kids that the world was hotter during the time of Jesus and Julius Caesar. 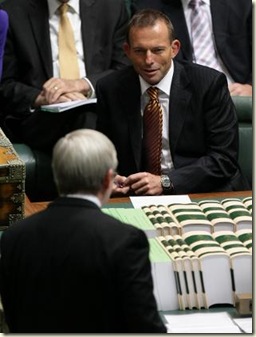 Rudd made merry with Abbott’s speech to the kids, and though he only mentioned the Jesus line, he must have been thinking of Caesar when he referred to Abbott as “the man who assassinated the Member for Wentworth”. He ended by calling Abbott the man who destroyed bipartisanship on the issue, and you could have been forgiven for forgetting it was Rudd who was supposedly in trouble on the issue – because it seemed like he wanted more questions on the topic.

That no further question on the ETS were asked may show that this issue is not as good for the opposition as they hoped (though I’m always loathe to suggest there’s some strategy to the Liberal's questions), but certainly I cannot see Rudd being worried by it, unless they get more cutting. The problem is, the Libs can’t get away from the fact that if they think it is bad that the ETS has been delayed, why don’t they pass it? If they don’t want it passed, then what are they asking Rudd to do?

Next up was Chris Pyne on cost per square foot etc of the School Halls Program. He quoted from the Rawlinson Construction Handbook (see tradies – he’s one of you!). Once again Rudd dealt with the question with ease – mostly because he was able to refer to the Auditor General’s report – that will be used for as long as the Government can to put away any questions in QT on this issue.

The next few questions tried to work on a theme that Rudd had failed to keep his promises. The first was from Greg Hunt on the scrapping of the insulation scheme. It was the only time Rudd played and missed. He reverted to Rudd-speak, and obviously wanted to finish his answer as quickly as possible. Sharman Stone then followed up with a question about the dumping of the Childcare Centres. It could have been a good question, but as usual it became too broad and allowed Rudd to boast about the 50% child care rebate, but again I expect the opposition to sharpen their attack on this issue – the problem being of course that Sharman Stone will never trouble anyone with her questions, let alone a skilled performer like Rudd.

Then Scott Morrison came into the attack to deal with the old favourite of asylum seekers. The opposition did not like Rudd’s response because he gleefully referred to Morrison’s claiming that putting asylum seekers up in Hotels was something the Howard Government only did under exceptional circumstances. Rudd pointed out it was Howard Govt policy in 2001, 2002, 2003, 2004, 2005…. The result can be gauged by the live minutes:

And that was basically the end of the “torrid” day. Though Kate Ellis did talk about the World Cup bid, and Tony Burke talked about locusts (say what you like, you can’t say the range of topics is narrow in Australian parliament).

Today’s QT showed what the Opposition's attack will be – broken promises. But from their effort today, they’ll need to work on their delivery, because the pitch was looking pretty flat.

if only you wrote for the australian

"God bless Marn. Question Time would be poorer without him and his lack of vowels. "

Actually, it's lack of consonants, but otherwise Grog Rules! OK?

all in all a very normal day....where was the mother with children, the one from the seat of Indi?
did she not have anything to contribute?
poor thing almost fell asleep during monday nights Q&A