I'm with Gebrselassie for the first 100m 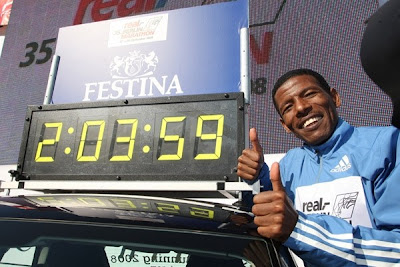 On Sunday in Berlin, Haile Gebrselassie broke his own world record in the marathon of 2hrs 3 min 59 sec. Running on the course where he set the old mark last year (and where Paul Tergat had set the previous record in 2003).

Now I was disappointed when Gebr decided to skip the Olympic marathon due to concerns about pollution, and I doubt he would have beat Wanjiru on that day anyway (2:06:32 in the heat and smog of Beijing was a great run), but he has certainly shown that while he may have lost some speed on the track - he came 6th in the 10,000m - he is still the king of the road (and also close to a million dollars richer).
Now let's break down his time.
He went through the halfway mark in 62 min 04 secs; which means he ran the second 21.1km faster than the first (ok only 5 secs faster, but still most mortals would only do the second half of a marathon faster if the ambulance they were in the back of on the way to hospital decided to go along the marathon route).
Now the time itself - 2 hrs 3 minutes, 59 seconds over 42.195 km. Break that down and it's 2 minutes 56 secs per kilometre. Should you be near a gym in the next few days, hop on a treadmill and try it at that pace for a kilometre. If you're still standing, you can call yourself fit. Do it for another 2 kilometres and I hope you're getting paid for whatever sport you play.
Ok, break it down some more. That pace equates to running 400m (one measly lap of the oval) in 70secs. 800m? We all did that at school - but hands up if you did it in 2 min 21 secs? If you did, you were most likely the state champion in your age group.
How fast is that for a mile? 4min 43sec. Ok, it's not Roger Bannister pace, but the difference is Gebrselassie kept it up for 25 more miles...
How close is he now to breaking the 2 hour mark (aside from the obvious 4 minutes)? He would need to run every kilometre 5.6secs faster. Or every 400m 2.2secs faster, or only 0.56 secs faster per 100m. That's only half a second! A doddle! The first 100m should be easy... the next 421.95 lot of them might get a bit tougher though...
Posted by Greg Jericho at 7:30 PM