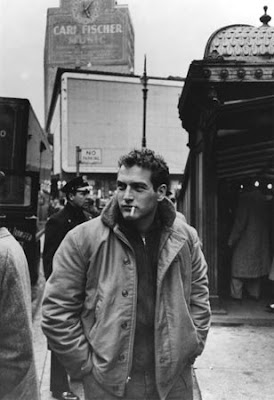 How long was Paul Newman's career? Well his first two big breaks in movies were in Somebody Up there Likes Me (1956) and The Left Handed Gun (1958) in two roles intended for James Dean, and his last work in film was doing the voice of Doc in the Pixar movie Cars (2006), which is my 5 year old daughter's favourite movie.

The actors nominated with him for his first Best Actor Oscar in 1958 were Tony Curtis, Sidney Poitier, David Niven (the winner) and Spencer Tracy.

In 2002 he was nominated for best supporting actor, and of his fellow nominees Chris Cooper, Ed Harris, Christopher Walken and John C Reilly only Walken was in his teens in 1958 (Reilly wouldn't be born for another 7 years).

That is a career.

He was among the first wave of method actors (he studied at the New York Actor's Studio), and he was a great actor - his work in the early films is raw and edgy; but what really put him ahead of the rest was how great a star he was.

Within 2 years of his role as Rocky Graziano in Somebody Up there Likes Me - which if you ever catch on TV is gritty and very "method actorly" - he was co-starring with Elizabeth Taylor in Cat on a Hot Tin Roof and then being the star of the huge blockbuster Exodus.

His best decade was the 1960s - The Hustler, Hud, Harper, Torn Curtain, Cool Hand Luke, Butch Cassidy and the Sundance Kid, would be the type of CV 99% of actors would die for. But in the 70s he kept going and really became a major star - The Sting, The Towering Inferno and the marvelously low-rent Slap Shot.

The 80s could have seen him do cameo roles, but instead he kept acting, and turned in some of the best performances by 60year old+ actors - brilliant in The Verdict, solid in The Colour of Money (for which he belatedly got an Oscar that he could/should have won at least 3 or 4 times), and I love his performances in Nobody's Fool in 1994, and The Road to Perdition in the 2003.

He is of course just as well known for being the perfect husband - married to Joanne Woodward since 1958 (often forgotten he was married for 10 years prior and has three children by his first wife) - and as the great all-round person - his pasta sauces and charity work etc.

He was serious about his acting, but didn't have the reputation of being a pain in the arse on the set. He was one of the great stars, but he wasn't known for big-noting himself, and was scandal free (maybe because he only hit it big at the age of 31).

And if his nine Oscar nominations aren't enough of an accolade; he also could be proud of the fact that he made it onto Richard Nixon's enemies list for "Radic-lib causes".

And so where do we see him when we remember him? Playing pool against the Minnesota Fats in The Hustler (very near the top of the list of great films that are hard to watch)? Sitting on a bed in crutches arguing with Liz Taylor in Cat on a Hot Tin Roof? Giving Katharine Ross a ride on a bicycle in Butch Cassidy? Playing poker against Robert Shaw in The Sting? Trapped in a burning skyscraper in The Towering Inferno?

For me, it has to be eating 50 eggs in Cool Hand Luke:


He's about the last of his generation - Poitier and Curtis are still alive, but not really acting, and other "older" actors like Dustin Hoffman, Robert Redford and Jack Nicholson are all around 12 years younger than he, and didn't arrive on the scene till the end of the 60s. He's a guy who worked with Alfred Hitchcock, Robert Wise and Sam Mendes (and also voiced a computer animated car in a Pixar film).

He did it all, and he did it well.

You can't ask for much more than that.
Posted by Greg Jericho at 1:42 PM