Last night I stayed up till midnight so I could watch Liverpool play Manchester United. At the final whistle, with Liverpool winning 2-1 (beating Man U for the first time since 2004), I was as happy as would be with an Adelaide Crows win, despite the fact I've never seen an actual Liverpool match, never been to Liverpool, and don't even think I've met anyone from Liverpool.

I've been supporting Liverpool since at least 1986, when I sat up and watched Craig Johnston play in the FA Cup Final against Everton. It was pretty natural to support Liverpool - they had an Australian playing for them; and at the time they were the best team in the world. I think however that I had known about this thing called Liverpool FC before then, and perhaps for no other reason than The Beatles were from Liverpool I chose them to be my team.

Since then I have followed them with ever increasing fervor. In the late '90s early 2000s I worked in a company that was full of English Premier League fans (to the point where there was even a staff Premier League tipping comp), and during that time as one of the few Liverpool supporters working there every win was treasured; every loss felt deeply (and usually accompanied by scorn and derision).

I was ecstatic when Kewell signed with them; disappointed with his constant injuries. I daily check out the team's website for any updates, and now that I have foxtel I watch as many games as I can. And so because of some unknown little reason 25 odd years ago, I now get to stay up till midnight and ride the highs and lows with an English football team.

Liverpool is not my only football team. In Spain I support Barcelona, if only because I like their jersey (yep sometimes the reasons are dopey) and because I hate Real Madrid - all that history with Franco. In Italy, I follow Juventus; which all things being equal would be a team I would despise (they're black and white; they flirt with corruptive practices), but because when I was in primary school I read a book on Italy that mentioned Juventus in glowing terms I have supported them ever since. Stupid really. Were I to come to the Serie A now, I would likely support Inter Milan; but alas I am a Juve fan, and with sport you can't let logic interfere with being a supporter.
In 1982, my sister and I were at home one January morning when on the TV came the Super Bowl featuring Joe Montana's San Francisco 49ers against the Cincinnati Bengals. My sister got in first and said she was going for the 49ers; and thus as brothers must, I went for the other side. And have been cursed ever since. Most people would have abandoned the Bengals immediately after the end of them losing Super Bowl XVI; but no not I. 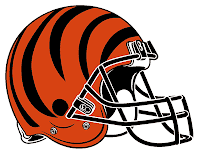 Ever since that day, I have desperately followed the Bengals - which means getting used to disappointment. I did sort of switch allegiances to the Kansas City Chiefs in 1993 when Joe Montana was traded there (while I couldn't support the 49ers I did like Montanta, so once he left I felt no problems supporting him at his new team). But even during that time I would still first look to see how Cincinnati was doing.
Since I have been supporting them they have lost the Super Bowl twice to the 49ers, and they have had many, many losing seasons. Sigh.
Having missed out on Montana in the NFL, I have used the Montana connection in choosing a College Football team to support. He went to Notre Dame - and as, due to the "let's do this one for the Gipper" line sprouted by Ronald Reagen, they were the only college team I really knew anything about it has been easy to pick them.
I don't even know why I would bother supporting a college football team, but probably since I got on the internet and have been able to read news stories, and get regular scores I have been following them closely, to the point of getting excited when in 2004 they met the number 1 ranked USC, I was on-line "watching" the game on the espn gamecast, and was oddly shattered for at least most of the day when they lost. Which is pretty stupid really. But that's sport. Last year they had their worst season ever (3-9). Sigh.
When it comes to baseball, I am a Yankees fan and I don't give a damn if they are the Collingwood of the Major League; I don't care if they are everything I hate about professional sporting teams. I have been a fan of them since again reading about them in my primary school days - I mean Babe Ruth, DiMaggio, Mickey Mantle, Lou Gehrig... it wasn't hard to choose.
I am actually a big baseball fan, and a mad Yankees fan - or as mad as one can be when you're never able to see them play, or read anything about them in newspapers. My real support for the Yankees is due to the internet. I generally will have their games on the net during the day; I read as many news articles about them that I can; I know the stats of each player; I know the pitching rotations and other things of which without the internet I would be blissfully ignorant. 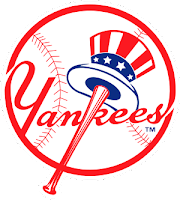 When Aaron Boon hit a walk-off home run against Boston in the 2003 play-offs, I was more excited than I had been about any cricket match for over a decade. Similarly when they blew a 3-0 series lead against Boston in 2004 I was as shattered as any sports fan could be.
This year for the first time since 1994 they won't be in the play-offs. And so like a true fan, I don't give a damn who wins the world series. Sigh.
There are other teams that I have followed over the years - like the Edmonton Oilers in the NHL, but I just don't get to see any hockey at all, and I don't know any of the players so they don't really count.
The one sport I have never adopted a team is Rugby League. I lived for over 11 years in Queensland, and yet could not get excited or even vaguely interested in the sport, and even less so in the fortunes of a team. I couldn't even muster a concern over the result of the State of Origin. I did watch this year's games, but I can't remember who won.
It's weird really, name another sport and I'll probably have a team - if a hurling match is on I'll be cheering for Country Cork (saw them play back in the 80s on Wide World of Sports); if it's Japanese rugby union, my loyalty is to Waseda University (once saw them beat Meiji University at the Olympic stadium in Tokyo).
I just have to have a team if I am going to be bothered watching a sport - even during the America's Cup in Fremantle in 1987 I was firmly behind Australia IV over Kookaburra III (the fact that they were both competing to represent Australia didn't concern me, once Australia IV lost, I didn't give a damn - in fact was almost happy when Kookaburra lost to Stars and Stripes).
I would probably be a happier person were I without all these loyalties - the Crows haven't won the AFL since 1998; the Bengals err have never won the NFL; Liverpool haven't won the English League since 1990 (but European and FA Cups make up for that); and Notre Dame haven't won a NCAA title since 1988. Sigh, sigh, sigh, sigh.
But sport rewards the faithful (it must!!), and so I shall keep the faith from afar - via the internet and pay TV - and hope for a glory year when it's all joy in England, America, Australia in summer and winter.
Posted by Greg Jericho at 7:44 PM