Today's abbreviated Question Time was all about pensions, but in reality it was about Brendan Nelson's leadership

The Opposition wanted to talk about why the Government wouldn't support its Bill to increase the single aged pension by $30 a week.

The Government wanted to talk about the fact that there was no Bill to support as the Libs had stuffed up and not realised the Bill they were going to introduce was unconstitutional.

The Opposition wanted to talk about why the Government was doing a review into pensions when leaked documents showed a mini review on pensions had been done in March this year.

The Government wanted to talk about why the Libs had suddenly started caring about pensions, when Peter Costello's memoirs state that last year the Howard Cabinet had knocked back a proposal to increase the single aged pension.

In the end bugger all was talked about because Nelson moved that Standing Orders be suspended so that a debate on pensions could occur. This allowed Nelson to do what he most loves doing - getting overwrought, and using props.

Now, back in May and June after the budget the symbol of struggle for Nelson was Taragos and wheelchairs:

...they will be there in their Taragos with a wheelchair in the back... these are the men and women who are making decisions about whether they are going to buy processed sausages or chops.. 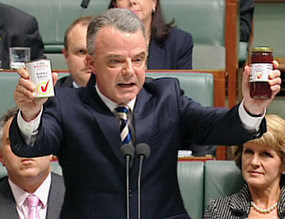 Now obviously the processed snags was a slip on his behalf (I guess when he's excited he goes back to the old faithfuls), because it was soon replaced with "Home Brand baked beans and jam sandwiches".

At this point he held up a jar of jam and a tin of baked beans. He then mentioned jam sandwiches once more before sitting down in a lather of righteous indignation.

I would hated to have had Nelson as my GP; I can just imagine the scene:

ME: So Doc, what's the prognosis?

NELSON: Look it's too early to say, but if the worst case scenario occurs, you'll die; and probably die horribly, slowly and painfully.

ME: Oh my God! But that... that's the worst, what about the best case?

NELSON: Look, son, forget the best case, think about dying a long, slow, terrible death. If you have a Tarago, I'd suggest selling it to help pay for the funeral. In fact if you look at this prop I have here, you'll see the various stages of the awful termination of your young, sad life.

ME: Geez, but you said it was just an ingrown toenail.

Now obviously had it been Malcolm Turnbull delivering the lines, he would have held up a jar of Fig Jam; but to give Nelson credit, it seems like he has opted for the less self-opinionated strawberry.

It was such a pathetic effort that I doubt it will do little to stave off Turnbull's rise. If Nelson is what the Libs' think is a good leader, you have to figure their strategy for getting back into Government is for the ALP to forfeit the next election. (Though given their performance in the by-elections of Mayo and Lyne, even that might not work).

Think back to great speeches in history - do you recall the speaker using a prop? Nope you don't, and the reason is you use a prop only to get a two second grab on the nightly news, and because your words aren't good enough to win the argument.

Julie Bishop is another serial props user, but she didn't do much today. Rudd though nailed her during one of his few answers when he referred sarcastically to her "deep standing compassion for the poor in this country". Given you sense Bishop would rather spend an hour locked in an elevator alone with Wayne Swan than be seen shopping in a Big W or Aldi, it was a nice little snide remark by Rudd, who it must be said was pretty comfortable during the short Question Time.

The comfort explains Nelson's decision to move the suspension of standing orders. Oppositions do such things when the leader is struggling and he wants to make a big show of strength to his party, and when they are not able to trouble the Government in Question Time. (Beazley for example did it on the day before he lost the leadership to Rudd).

Nelson referred to Swan in his speech as "the nervous treasurer"; but all those on his front bench knew that it was an out of date remark - especially as not 10 minutes earlier Swan had gleefully referred again to Nelson, Costello and Turnbull as Plan A, B and C of the Liberal Party.

For mine the best line of the day was by Rudd. Over the first part of this year, there has often been a great deal made of Nelson being able to speak without notes while Rudd often reads his speeches. It has obviously rankled Rudd somewhat, and so today after ripping into virtually every individual member on the Lib's front bench as "not being fair dinkum" about pensions, he pointed at Nelson, and with a fair bit of venom in his voice, described him as one who "memorises everything and believes in nothing".

Nelson was obviously rankled himself by the remark as at that point he stood up to move the suspension of standing orders and tried to prove that he believes his leadership has credibility.

UPDATE:
Just after writing this I read on the ABC website that Nelson has called a leadership spill for tomorrow.

UPDATE #2:
Turbull has thrown hit hat into the ring.

Ok, prediction time... Nelson. No Turnbull. No Nelson... lol I don't know to be honest. Were I a Liberal I'd vote for Turnbull, but the problem is trying to work out if enough Libs hate Turnbull's moderate ways to keep persevering with Nelson; or if enough think the time has come to change and are prepared to put up with Malcolm (or possibly think they'll be able to control him).

Ok, 9:39pm. I'm going to say Turnbull wins; with Abbott and Bishop throwing their support behind him. I just saw a clip of Nelson today doing his Jam and baked beans shtick, and neither Hockey nor Bishop sitting behind him looked particularly impressed - which is a change from back in June when he was going on about Taragos (back then Bishop even prompted him).

But I say it with no real conviction. The internal machinations of the Liberal Party aren't my forte.
Posted by Greg Jericho at 6:33 PM