The Blue and White Cafe and the Birth of the AB

Back in 1990, in my first year of uni, my friends Schmuck and Gus decided the time had come. They led me from our boarding college at the Luther Seminary in North Adelaide (full of seminary students, students from the country going to uni to become teachers, and those like me who had no desire to become teachers but were prepared to pretend we might) down Ward Street, on to O'Connell Street and up to the wonderful Blue and White Cafe.

All uni students of any sense have a favourite take-away shop. And all uni boarding colleges have a take-away shop that is without exception loyally frequented by those students. Thankfully the Sem’s students’ take-away shop of choice was the Blue and White Cafe (or “Grease” as it was affectionately known). For the plethora of North Adelaide colleges there are two choices – the Blue and White or the Red and White. Now the Red and White always had a good supply of video games, but when it came to food, there was only one choice – and that was where Tony held court behind the counter, dolling out wisdom, hot dogs with the lot, chips and sauce, and the greatest yiros ever wrapped in pita bread.

Now I was a hot dog with the lot guy. I spent a good percentage of my AusStudy each week to get to the point where at 1am after Thursday night pub-night, I was able to walk into the Blue and White filled with students from Lincoln and Aquinas Colleges and be able to put up my hand and signal to Tony “the usual”. It happened once. It probably cost me $300 worth of hot dogs, but it was worth it.

But this night Schmuck, Gus and I were not ordering hot dogs, chips with sauce or hamburgers. Nope, we were having yiros meat and chips.

Where had this idea to combine the two great foods of the Blue and White – the fantastic, succulent skewered roast lamb kebab meat and the impossibly divine hot chips – in the same wrap of paper? Well therein lies a tale lost in the midst of time and legend and beer and memory and chilli sauce. Schmuck’s older brother had a friend who was allergic to the gluten in the pita bread, but he loved the yiros meat, and the year before had decided to ask for yiros meat with chips. Now when I later cross-examined Schmuck’s brother on this story, he thought his friend had got the idea from another of their friends who happened to go to Lincoln College. But he couldn’t be sure.

Whoever it was, it was an idea of genius that deserved to be continued. Schmuck and Gus however had taken the idea to the next illogical step. You see Schmuck was a gourmet of some standing in our peer group. He loved chillies; and thought there were few meats that could not benefit from the fiery sauce brewed out of those hot peppers. Gus, on the other hand, was a wannabe gourmet, who also wanted to be known as someone who liked chilli sauce despite the fact his eyes seemed to melt with every taste of the sauce on his tongue. I was someone who had no aspirations to gourmetdom, and felt that my life up to that point had been quite good without chilli sauce. Alas that chilli virginity was about to end.

You see yiros meat and chips is all well and good (and sure other students from other colleges may have eaten it) but Schmuck knew it needed chilli sauce (after all he preferred his minimum of chips with the red hot stuff – as it also had the effect of ensuring few people would try and flog his chips). And so when we ordered our yiros meat and chips, we ordered it covered in chilli sauce.

Now it was God awful to look at when you plonked it down on the plastic table out the front and unwrapped the paper. The steam – God did it rise up from this congealed mass of meat and deep fried potato on a cold winter’s night! And geez was it hot -  the chilli sauce was impossible to avoid. But it was unlike anything else you’ve ever eaten, and be buggered if you couldn’t stop from going back for more. By the end, like seagulls, we picked at the meat and chips in increasing speed until nothing was left but the white butcher’s paper tinged in red from the residue sauce. 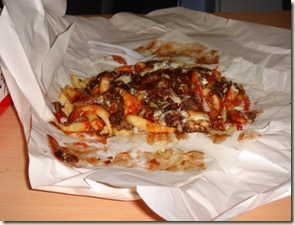 And in between sips of iced coffee drunk in vain attempt to reduce the heat of the chilli sauce, we declared that never had a meal been better.

But being intelligent young lads, this wasn’t enough for us. The envelope needed to be pushed, the pain barrier crossed, the point of no return passed. And so we began to get creative. Schmuck, Gus and I, with help and support from friends, got more adventurous. We noticed that there were other sauces laying behind Tony’s counter, and so we asked for those to also be put on. Garlic salt? We need some of that. Chicken salt? Couldn’t hurt. Mayonnaise? Well we are but young once, let’s try. And so what started as a nice combination of yiros and chips suddenly developed into a test of strength. It became for us “yiros meat and chips with all the salts and all the sauces” – a pretty long name that demanded re-badging (as it indeed now has).

Quite often we went too far, and had to admit some things just didn’t mix. I recall one late night (or was it early morning) standing at the counter suggesting some of those raw onions there might do the trick (they didn’t).

But regardless, the idea was now out of the kitchens of hell and into reality. We passed the order on to younger students – as a right of passage – and to friends (my cousin was introduced and quickly became an addict), and we let those from other colleges walking past who marvelled at what they saw in on the secret.

In my final year of uni in 1993, it was still strictly under the counter. But it was changing – it was becoming more popular, and with popularity, as things always do, it became standardised. The raw onion was gone; the mayonnaise as well (good thing too). But the chilli sauce remained. It had also got a name – and I have no idea where it came from, but it became known (due no doubt to its appearance) as an “Abortion”. Sensibly it quickly got shortened to “AB”. I recall rather sniffily looking down on my younger uni colleagues, and thinking how disgraceful it was to give this magnificent thing a name, as though it was above labels, and that to me it would always be yiros meat and chips.

In 1994, I left Adelaide, and since then have no longer been able to indulge in the greatest ever post pub-night meal.

My cousin remains in Adelaide and he remains as well a loyal diner of what is now an above-the-counter and on-the-menu item. He tells me some fragile, 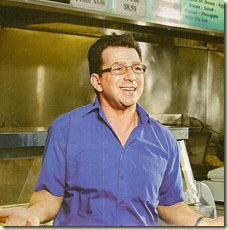 young things apparently disdain the chilli sauce and use barbecue sauce instead – sacrilegious says I. Sure it may taste ‘nicer’. But the AB is a test of character as much as it is a meal. Starting without the chilli sauce is like daring yourself to dive off the 10m platform, and instead jumping from the 3m springboard. It just doesn’t cut it.

I was recently sent a copy of an article on Tony and the Blue and White that was in The Advertiser Magazine. It took me back to those glory filled nights of drunken haze that ended with walks from the Wellington Hotel to O’Connell Street. It mentioned that the Blue and White now shifts over 100 of these glutinous delights each night. The article also says the cafe “claims” to be the inventor. To which I say, pfft. Any claims that the AB was invented up the road at the Red and White are complete tosh. Maybe it was some guys from Lincoln College, or maybe it was me and my mates Schmuck and Gus who first devised the AB; that I won’t vouch for – I think like Jazz it just evolved. But what I do know is that never in my time walking down O’Connell street late at night in the early 90s did I ever see drunk uni students outside the Red and White submitting themselves to the ultimate food test.

For that, you had to be down Tony’s way. At the great Blue and White.

I stayed at St Ann's in 85/86 and the A from the Blue and White was around then. Chips and yiros meat are a great combo but the true art was to put the most improbable collection of sauces on it. I never understood the mayo.

Stayed at Anns 02-04 miss the AB. As well as being good at 2am on any given night, it was also good to 'double the size' and consume the rest of the abortion the following morning. Only time I have ever found microwave chips edible!