Today's Newspoll showed the two party preferred had moved from 56-44 to 55-45 - or in reality, showed no movement at all, as it was well within the 3% margin of error.
The big news was that Turnbull's Net Satisfaction rating improved from the last "post utegate" poll. Well of course it did - it could hardly get any worse. His Satisfaction rating went from 25% to 31%. His Dissatisfaction rating dropped from 58% to 55%. None of this is any good. Actually, it is absolutely horrible. (But according to The Australian, this poll is Turnbull clawing his way back!)
Interestingly Rudd continues to perform well - his Satisfaction rating improved from 59% to 61%. Anything over 60% is historically among the stratosphere. To still be there over 18 months is phenomenal. The brilliant Possum over on Crikey has a "spiffy" graph showing the monthly average of PM satisfation rating. So you can see being over 60% is not a common thing - except if you are Rudd. 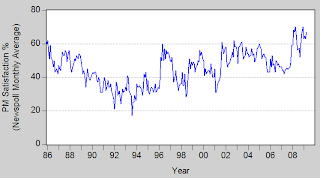 And while Turnbull did recover from the dark depths of the last Newspoll, he is still a long way from the surface. A good comparison is where he was post the Budget.
On May 15-17 his Satisfaction rating was 40%; Dissatisfied 42%, Uncommitted 19%. Now the figures are 31%, 55% and 14%. So his Satisfaction rating has dropped 9%, Dissatisfied has gone up 13%, and the Uncommitted has dropped 5%; which essentially means that most of those who have stopped being uncommitted have gone to being unsatisfied - not a good indicator of how he is doing with swinging voters.
But there is worse news. On the question of who should lead the Liberal Party, Turnbull came fourth. Costello got 36%, Hockey got 20%, Uncommitted got 18% and Turnbull, 16% (Abbott got 10%). Now I may not be a big fancy city statistician, but I can make this bold prediction - any party whose leader is running fourth as best candidate to lead the party behind "Mr Uncommitted" is never ever going to win an election. Everything else - every poll, every policy, every statement is irrelevant.
***
In the week that I've been away some pretty dumb commentary has been running in the press (admittedly mostly in The Australian) about what Rudd should be doing about the Rio Tinto executive Stern Hu. Most of it is linked with the fact that Rudd can speak Mandarin. Take this from Jennifer Hewitt on Saturday:
SO much for a Mandarin-speaking Prime Minister. This is more like a shouted insult direct from Beijing, understandable in any language. A Pope, a US President and many speeches later, Kevin Rudd may be well pleased with the results of his trip to Europe.
This morning she got even more over-excited:
LOSE, lose, lose.

Kevin Rudd has arrived back in Australia minus a road map on how to extricate Stern Hu or his own government from the messy unravelling of the relationship with Australia's most important trading partner. Beijing is clearly less interested in solving the problem or even limiting the fallout than it is in making a very brutal point.
...
...it's unlikely to lead to any simple or quiet back down from a crisis that has so quickly spiralled out of Australia's control and is becoming more openly politicised by the day in both countries. That won't change. The Prime Minister is facing down the opposition's hysterical demands for his immediate and public intervention. This would certainly raise the political temperature without guaranteeing any results and, given the diplomatic mess, would more likely prove quite counter-productive.
Gee I wonder who egged on the opposition's politicisation of the issue? And why should speaking Mandarin matter? Speaking English didn't help Howard get the US to charge Hicks with anything - that took 4 years...
Actually the opposition has been incredibly dumb on this issue. Take Julie Bishop on Insiders:
JULIE BISHOP: I don't think it's useful for me to speculate [on why this has happened] but there's certainly been public commentary that this is connected with the iron ore price negotiations.
There's also a lot of evidence to indicate that there is a major fracture in the relationship between Beijing and Canberra, based on the fact that there's been such a lack of information and lack of cooperation and almost to the point where Beijing is snubbing Canberra.
Now I don't think these events occur in isolation. I don't think this is just one event. I think this may well have been a build-up of concerns on the part of China about the way the Australian Government has been treating China.
We know they are deeply troubled by the Government's White Paper. We know that they were deeply insulted by Mr Rudd's raising of the human rights issues in Tibet.
It's interesting that he can raise the human rights of the Tibetans but not the human rights of an Australian citizen.
Ah Julie, never miss an opportunity to cover yourself in a blanket of idiocy. Can you believe an opposition Foreign Affairs spokesperson criticising Rudd for raising human rights?? And so she attacks Rudd for "fracturing"the relationship between Beijing and China, and yet she think calling for Rudd to pick up the phone, call the Chinese President and demand Hu be released will improve things?
Look I'm no Chinese expert, but bumping this thing up into a chest-beating, power-play exercise will not help Hu at all. China will never publicly back down to piddly little Australia. Jack the Insider reminded me of an incident in 2001 involving a US Spy plane that was forced down on the Chinese Island of Hainan. George W Bush at first was soft then he upped the ante regarding the return of the crew and the plane:
"The kind of incident we have just been through does not advance a constructive relationship between our countries," he said at the White House.

The upshot? The crew were returned only after America was forced to issue a note of apology, stating:

"Although the full picture of what transpired is still unclear, according to our information, our severely crippled aircraft made an emergency landing after following international emergency procedures. We are very sorry the entering of China's airspace and the landing did not have verbal clearance."

And the plane itself? It was thoroughly gone through by the Chinese, and shipped back to America in crates in a Russian cargo plane.

That's how China dealt with a major international incident involving military personal and a secret aircraft from the biggest superpower in the world. You think Rudd coming out and say he has rang up President Hu Jintao and demanded Hu be returned is going to work?

Look the Govenrment does need to be involved, but the opposition needs to also shut up and let diplomacy have a chance. The big words need to be said behind closed doors, not in the media.