So, much as it is a song that reverberates in my mind when I think back to my largely not misspent-enough youthy days at university, it isn't a song of the year for me. Nope, in 1991 there were other much more resonant songs for me.

Another song that came out in November of that year, U2's "The Fly" had a pretty big impact - massive U2 fan that I am. But that wasn't it. Neither was Julee Cruise's "Falling" from Twin Peaks, even though for at least the first 6 months of 1991 that was the show to be known to be watching (ok, bugger all of it made sense, but you just had to watch it because it was bizarre, sexy, fun and well because if you didn't the other kids might not think you were cool).

But no, for me the song that year was one that didn't even get released as a single - it came out on an EP, "Tingles", an EP that sold out in Adelaide by the time it got to Number 1 - a good 3 months after I bought it. The song was "That Ain't Bad" and the band was Ratcat.

Looking back, some 18 years on (oh geez, that is a long time ago) it is easy to forget that Ratcat were a Triple J band. They were a full-on indie band that triumphed over the crap being played on commercial FM radio. Just how bad was music back then? Take a gander at the top 25 songs that year on the ARIA charts:

I mean, let's be honest, there's a fair few tracks there that would make it onto anyone's list of "Songs I'd be forced to listen to in Hell" CD. That I am here now humming "Read my lips and take dictation... if you want to wait till later/ hands of my detonator" is beside the point.

As an aside seeing "Rush", makes me think of how cool I felt when I first heard Big Audio Dynamite's other hit that year, "The Globe" and I mocked it for sampling "Should I Stay or Should I Go" by The Clash. I felt less cool when someone pointed out to me that the lead singer and guitarist of Big Audio Dynamite was Mick Jones who was also the lead singer and guitarist of The Clash. Oh well, it was nice few minutes of cred that I had.

I first heard part of "That Ain't Bad" on the bus back from Flinders University (the glorious 222 - Flinders Uni to Gepps Cross). For a good week or so I kept hearing parts of it on my walkman on the bus. It seemed to always be the song that Triple J was playing just as I turned on my walkman, or would be the song that they would play at the precise moment I would decide to listen to another station. 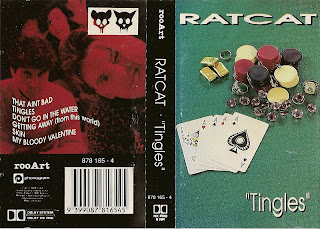 I only heard them name the band once, and couldn't remember if it was Ratcat or Catrat or Ratcatcher or something along those lines - either way I thought it was a totally cool name, and very quickly they were becoming my band.

You see there's something rather thrilling about being at uni and coming across a band that no one else really knows. It's why the indie rock scene is so beloved by uni students, and why they hate it when "their band" becomes popular. When you are young and trying desperately to be unique in this world, you are desperate to find something that is your own little secret; something that even if you mention to others, you will only be greeted with a blank look (so you can roll your eyes and ponder how anyone could be so behind the times). And thus you listen to Triple J, because they'll play music that Triple M or Nova will never so much as spit on.

The only problem is that by and large, a good 70-80 percent of what gets played on Triple J is total crap (was then, is now, will be in 20 years time - that's ok that's the whole point, you don't want people listening, in case they hear your music and it becomes popular). And so when you find something in that sea of unlistenable music, you cling to it as tight as you can. And so it was with me and Ratcat.

The song "That Ain't Bad" was a kind of grungy number that anticipated the sound somewhat of "The Fly" It had a great running guitar lick that was made for some excellent air-guitar moves, and an incessant drum beat that just got your head rocking back and forth. The lyrics were easy; the chorus, simple (wasn't hard to remember "you...ew..ew..eww... I love you"). It was just a great bit of pop, that because it was only being played on Triple J, was ok to listen to around uni halls - and at my boarding college a good number of times I had it blaring out of my room window across the lawns to us sitting around benches chillin' - because of course I was the only one who owned the actual tape.

And yet it didn't last. Simon Day, the lead singer was far too pretty, and the band itself didn't know whether it was a grungy indie band or the next INXS. It actually supported INXS on its Australian tour in 1991, and well the young girls then just went mad for them. They brought out their first album - Blind Love, with the very poppy single "Don't Go Now". They went Number 1, they were played on Triple M and SAFM. And well that was it really.

But for a few bright early months of 1991, Ratcat were cool, and so was I for liking them before everyone else. And "That Ain't Bad" still rocks even though the unis now have students who weren't even born when it was making the charts.

And just to remind you of how bad things were musically, here's Melissa Tkautz singing "Read My Lips". Good luck getting through it all.