Australia's Unemployment Rate down to 5.5%

Last month when the unemployment rate rose to 5.6% I summarized it saying:

And that’ll do use for another month. Not great – 5,6% is certainly above where you’d like to be, but the trend of 5.5% at least gives us some hope that the March figures were just a bit of a blip to go along with the opposite sided blip in February.

And so it seems to be the case. Today the ABS released the monthly labour force data, showing that the seasonally adjusted unemployment rate had fallen to 5.5% and the trend rate stayed flat at 5.5%. 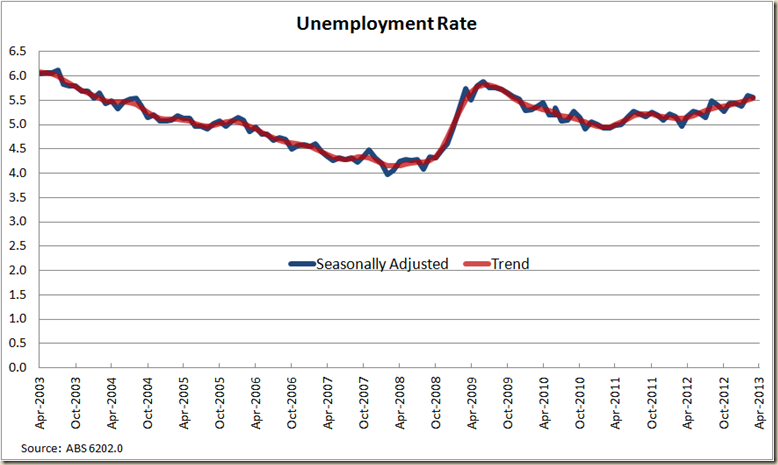 It certainly does suggest a steady increase since early 2011. But let;s go in for a closer look at the past 12 months: 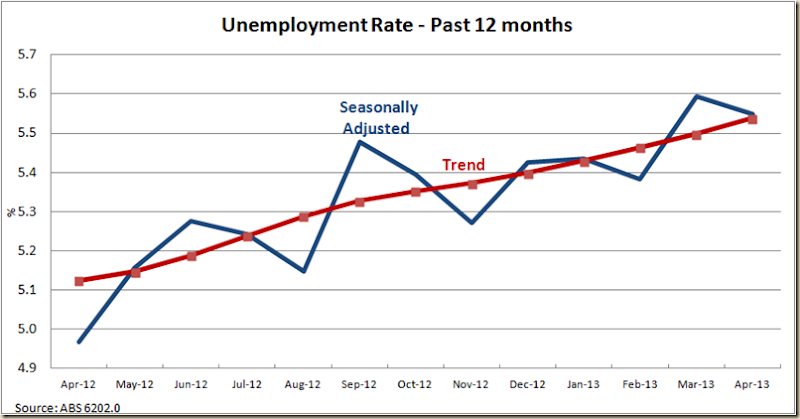 Again, while the trend rate has been steady at 5.5% for the past three months, it has within that amount been slightly increasing.

Let’s have a squiz at why the rate went down by looking at employment growth:

We saw a rather big spike in employment in April – a growth of 0.43% 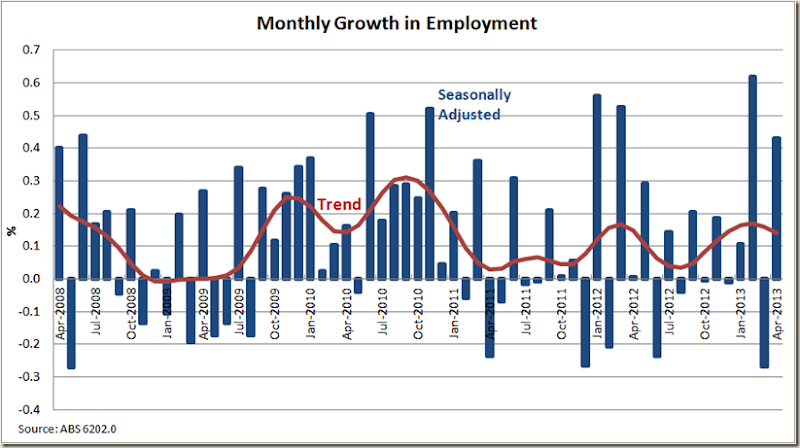 Now there is often a bit of scepticism when there is a big jump in monthly figures. When the February figures came out there was a great deal of head shaking when it showed that employment had grown by 0.618% – the biggest for a decade. Last month they revised that figure up to 0.64%. This month the ABS revised it down… to 0.619%.

Indeed the past 6 months haven;t actually shown much change in the figures – certainly nothing that would suggest they got it worng in any one month and needed to massively adjust it later on.

But let’s look at the annual growth in employment to get a clearer picture:

First the past 10 years for the big picture: 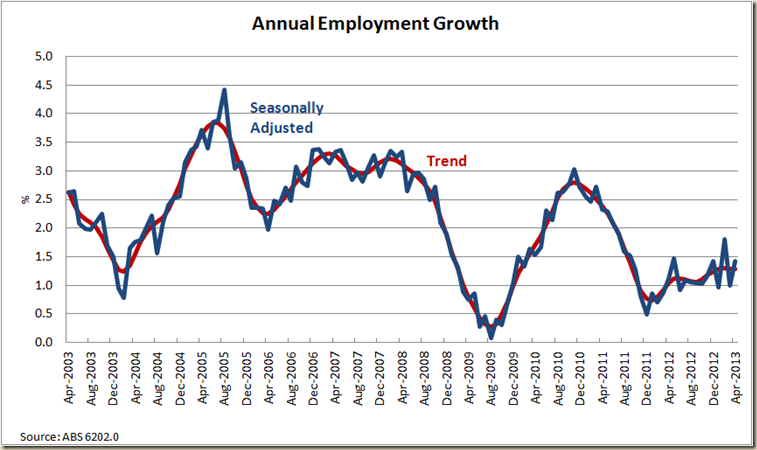 Clearly we’re not in boom time, but neither should we be as gloomy as all get out. I would note however it is now 22 months straight of annual trend employment growth below 2%. Thus getting a bit beyond the 20 months straight of such low growth from January 2001-August 2002. The average annual unemployment growth for the past 20 years has been 2.1% so the labour market certainly is below par. And you have to wonder about those who would suggest we’re about to see a big inflation breakout because of a tight labour market and low interest rates.

Indeed for some real perspective have a look at the rolling 5 yearly employment growth picture: 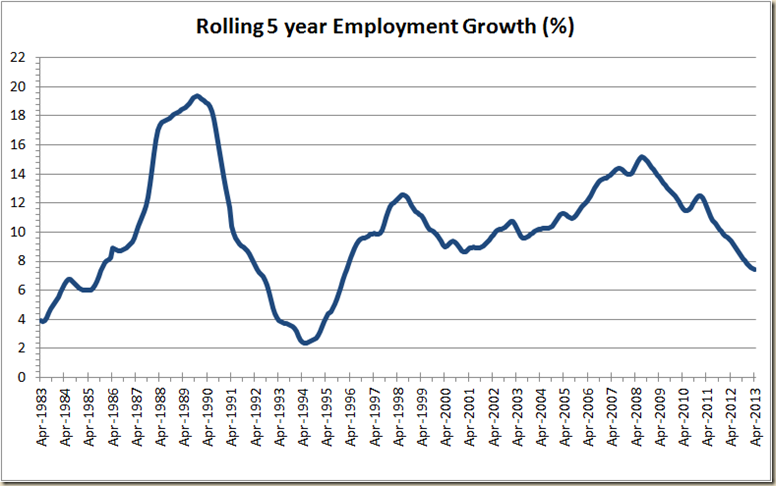 This below average level is also born out somewhat by the growth in hours worked – it’s solidly below the 0.2% mark: 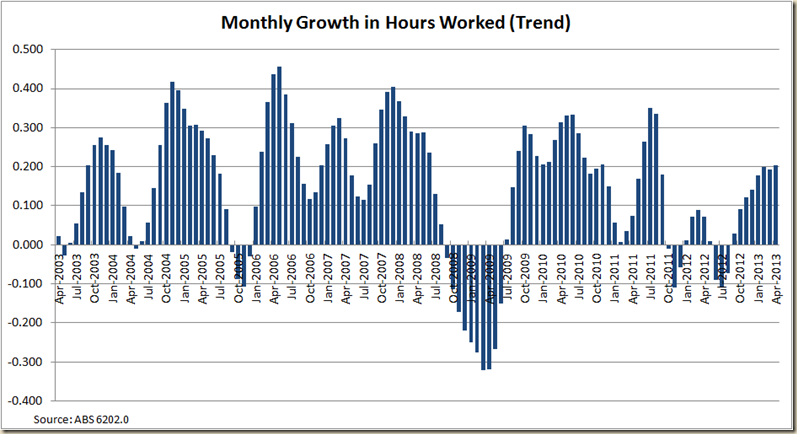 OK. Now we all know the unemployment rate is affected by the number of people looking for work, so how did the participation rate go? 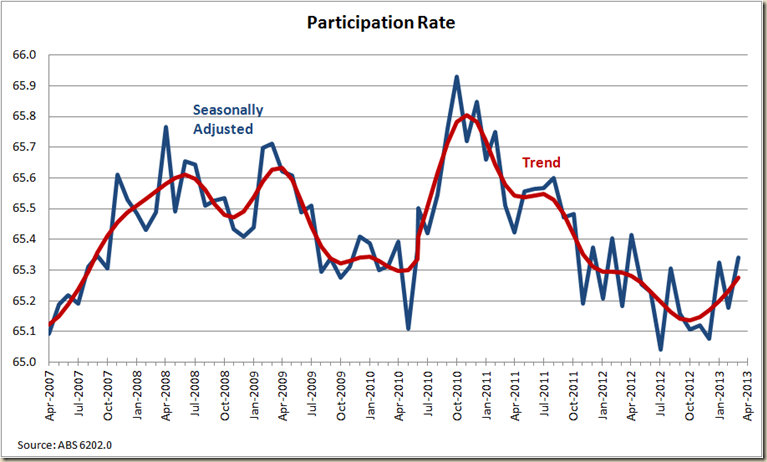 A nice little uptick to 65.3%. Certainly not near record highs, but the direction is certainly encouraging.

On that aspect let’s look at the employment to population ratio: 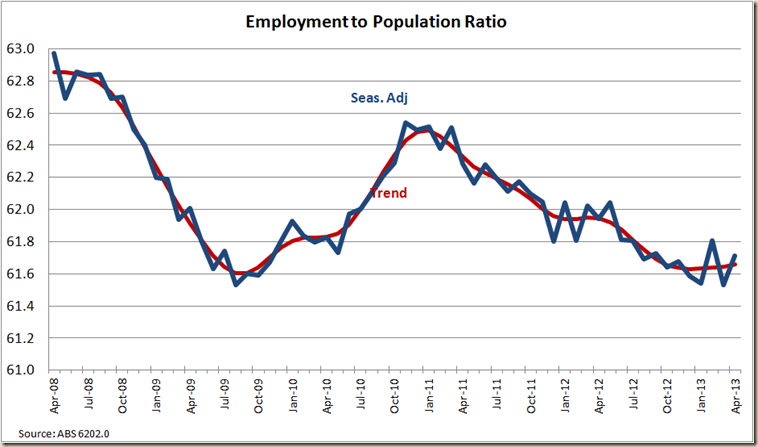 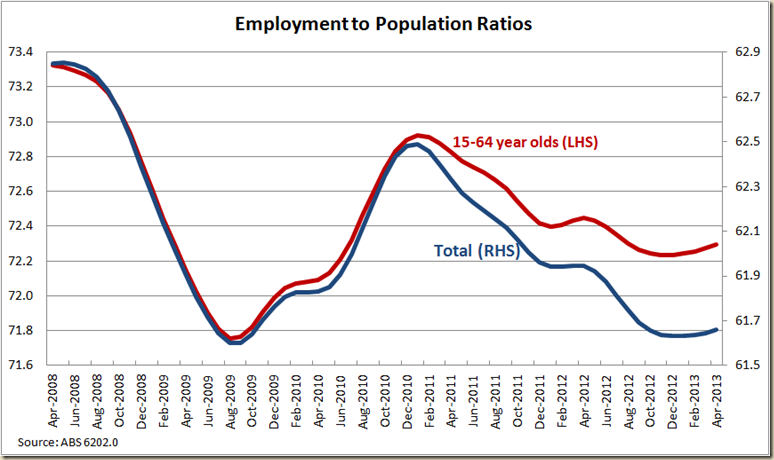 What we can see is that the rate of increase and decline among both the working age segment of the population and the total which includes people over the age of 64 was pretty similar from 2008 till the end of 2010. But since the star of 2011 the percentage of people over the age of 15 employed has fallen much more dramatically than has the percentage of those between 15-64 year of age.

Now it might just be a massive coincidence but the baby boomers born in 1946 (ie the first year of the post WWII boom) turned 65 in 2011. And thus we see the impact of the ageing of the population. The percentage of those between 15-64 working is below pre-GFC levels – suggesting that we’re a fair ways from that tight labour market, but we’re perhaps not as bad at the total figure would suggest.

OK Let’s look at the job growth itself. How did Full-time employment go? 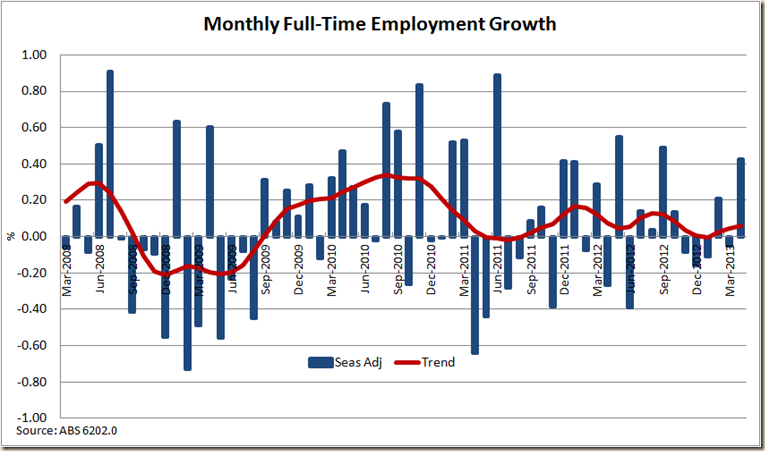 But Part Time employment is also growing and in trend terms there is now a greater percentage of the work force in part-time work than ever before. 30.1% of those employed are doing part-time work. 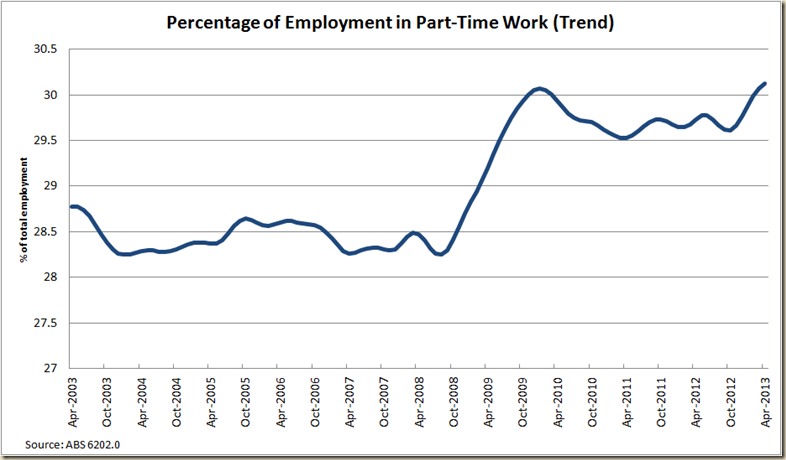 It looks like a big jump during the GFC – and it is mostly due to full-time work being converted to part time, rather than suddenly a whole of lot part-time work coming into the market, but it is part of a very long trend: 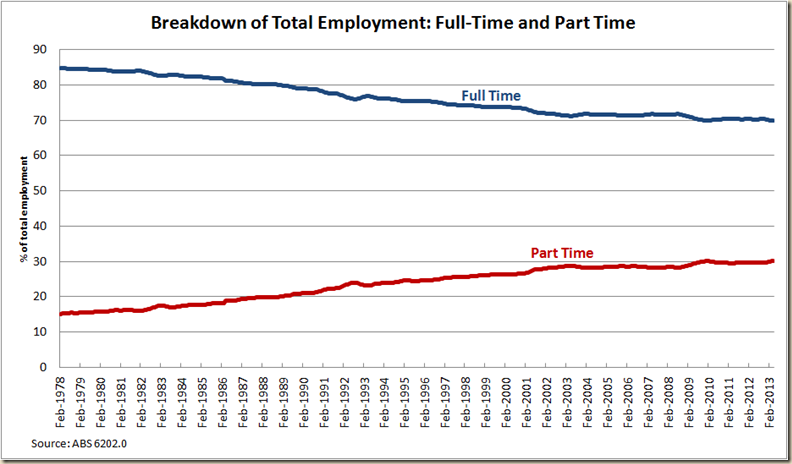 What has also happened is the unemployment rate of those looking for full-time work has remained flat while the national rate went down that 0.1 percentage point 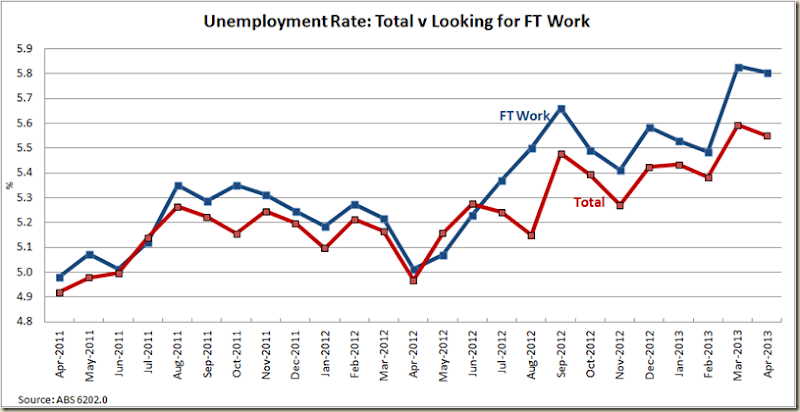 In trend terms you can see the difference between the two rates suggests again there is little “tight” about this labour market:

OK, now to men and women. Who is doing better in the labour market? 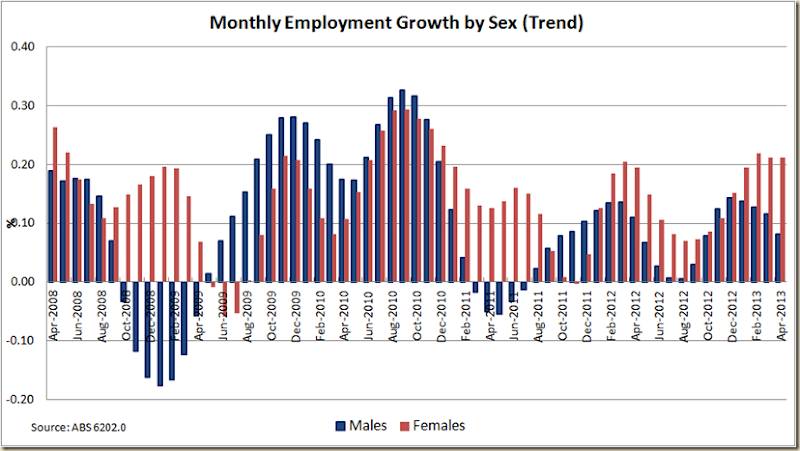 Anyhoo. That will do for the national rate.

It’s an improvement, but let’s not get carried away.

I’ll have a squiz at the states later.

you made it three times.
you were far too easy on Davidson!