Drum Piece–Budget: Not all declines are declines

My Drum piece this week looked at the announcement of a $12b fall in expected revenue and the claims and counter claims about what this means about revenue and the budget.

As a general rule I hate it when people start talking about total tax in nominal dollar amounts.

Usually when they do they’re trying to sell you something. Like the Liberal Party is currently with this graph it has put on its Facebook page: Well golly gee, it looks like tax revenue was flat – if not going down when the ALP came into office and then they got greedy and up it zoomed. Terrible ALP Government all about taxing you to death.

Well this is what the graph looks like if we take it back a few years: 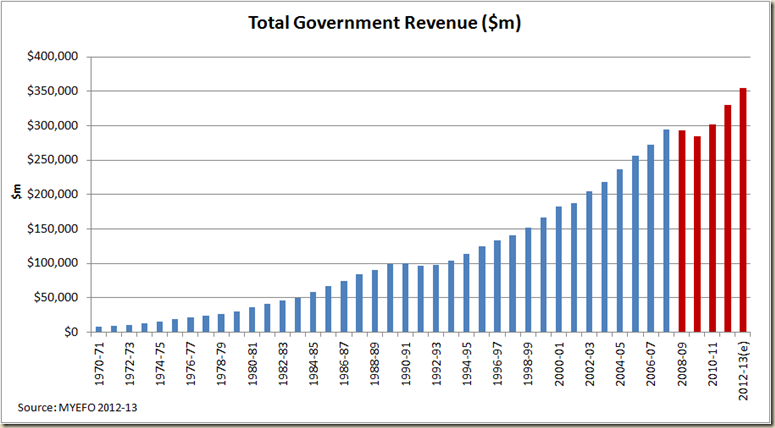 Suddenly the decline in revenue in 2008-09 and 2009-10 (the only time since the Great Depression total revenue has declined two years in a row) looks a bit stark.

But as I say, total nominal dollars are mostly for propagandists.

Let’s look at revenue as a share of GDP, because that takes into account inflation and the size of the economy (because inflation affects GDP as well as revenue and first the big picture: 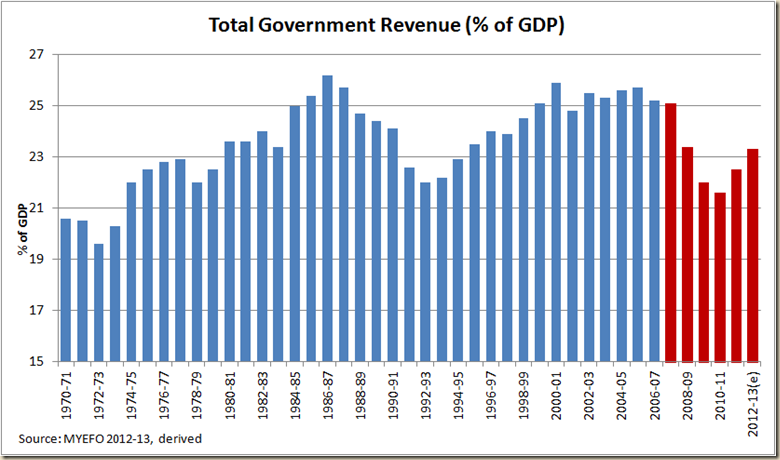 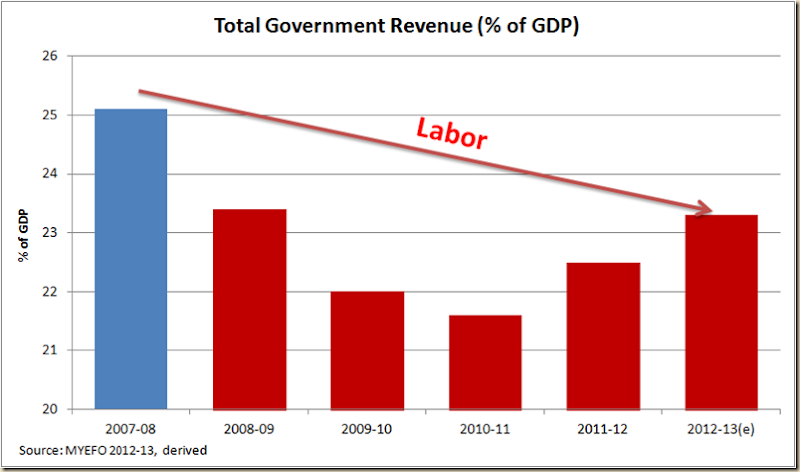 And of course the talk was all about the 7% increase in nominal revenue. But a good way to look at the increase is in real terms 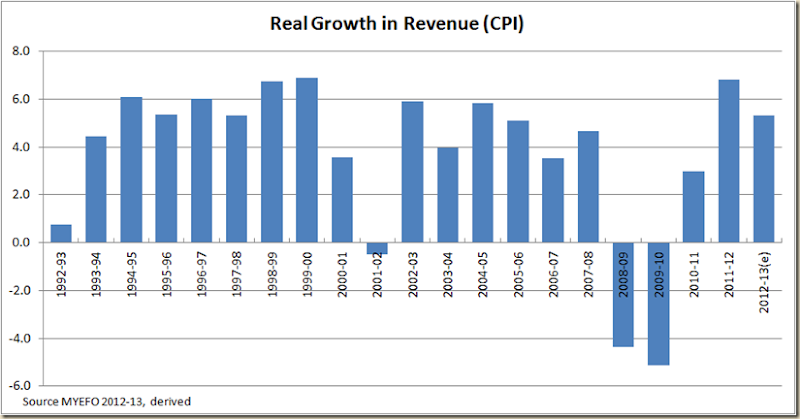 On this measure the Government has had a good increase in revenue – in fact at 5.3% it is just below the 5.4% average increase achieved from 1993-94 to 1997-98 when the Keating/Howard Governments took the budget from a deficit of 4.1% to a balanced budget. In the past three years average real revenue has increased by 5.0% on average – and yet Wayne Swan is supposed to have brought the budget back to surplus?

My favourite graph of the day: 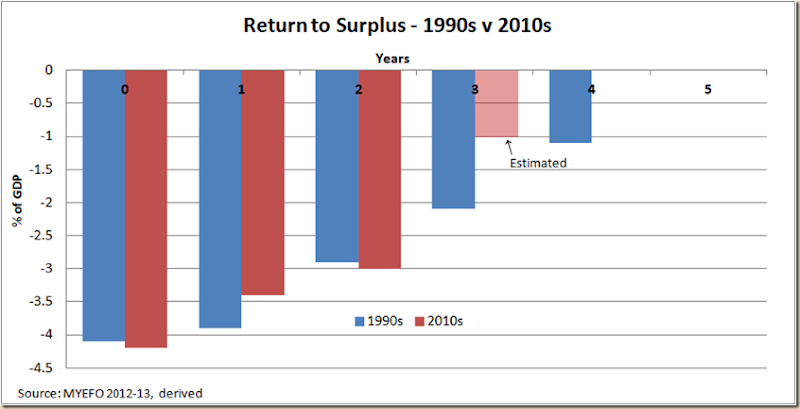 Wayne Swan was hoping to go from a deficit of 3% to zero in one year. It took Peter Costello 3 years, and the world economy was in a much much better shape than it is now.

One of the things I’m most interested in seeing come Budget day is the expenditure amount for 2012-13. In the MYEFO it was projected to be 4.4% less than last year in real terms. 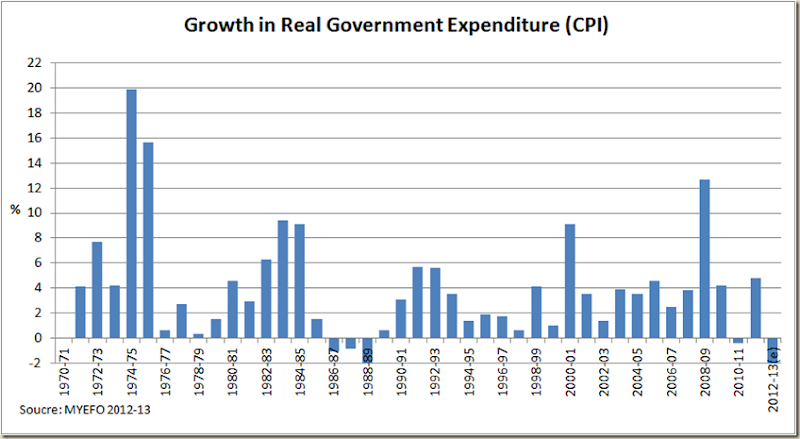 That in itself would be rather stunning, but (to go back to nominal dollar terms), the MYEFO was still predicting expenditure in 2012-13 to be actually less in nominal terms. And that has never happened in my lifetime: 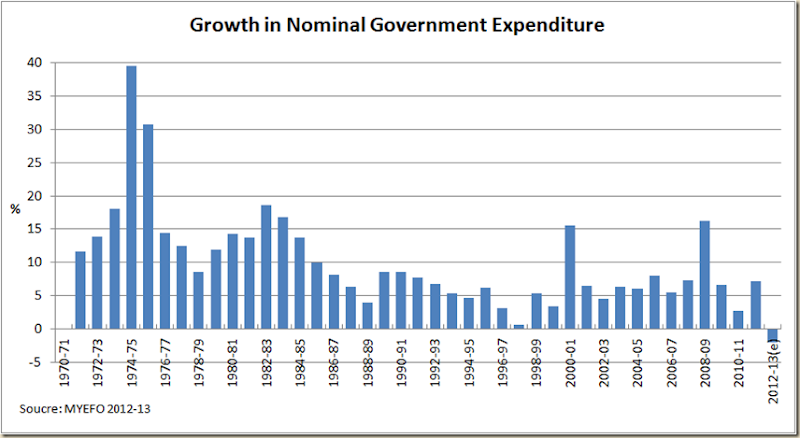 I’m not saying it should even happen – it’s pretty bloody severe austerity, which, because of the drop in forecast revenue Swan will get absolutely no credit for. But I am interested to see if it does happen (and also if any swifty accountancy is needed to achieve it)

Labor's pulling the same nominal $ trick in today's medicare levy increase announcement. They tell you that a person is still paying $x less tax than in 2007 even after the increase.

Allowing for inflation all the numbers are much smaller, and one is even negative.

What is it about politics that makes this practice acceptable (on all sides)?

Yes Autocrat - but not necessarily the other way round. We might be paying less in real terms (ie it increases but increases less than the inflation) but I'm interested (more out of curiosity) to see if it is even less in nominal terms as well.

And David you are spot on. The ALP has also done it in its graphs re uni spending.

Amazed the ABC published that, Grog.