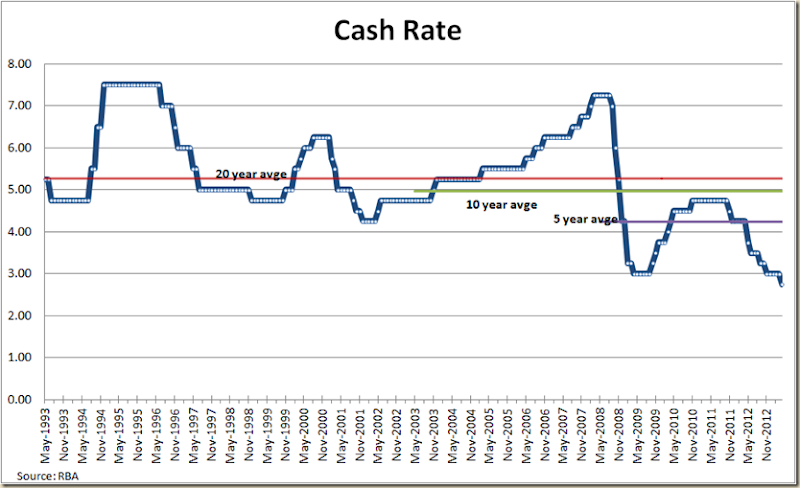 It came on the back of poor economic data such as today’s goods and services trade data which showed there was a pretty steep fall in import of capital goods – 21.7% in the past year which is the biggest drop since 2009.

Clearly as well manufacturing has been struggling  - notably seen by the rather awful AiG Performance Managers Index result in April fall 7.7 points to 36.7 – a long way below the 50 point mark which indicates production is steady: 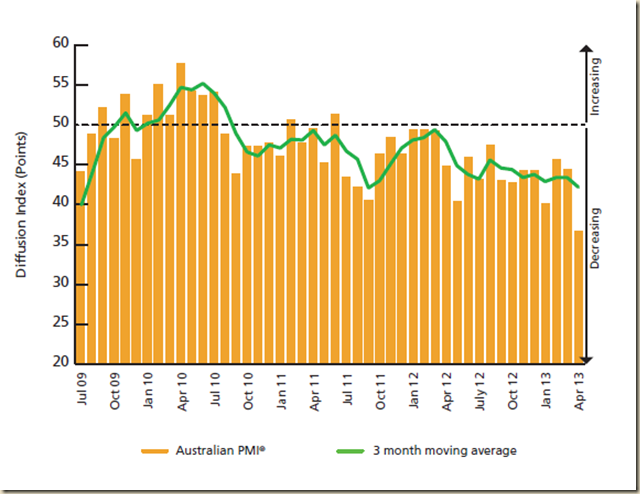 The big problem form manufacturing is of course the Aussie dollar. Despite having previously rock bottom rates, the dollar remain stuck above parity with the US, and at near post-float record highs on the Trade Weighted Index: 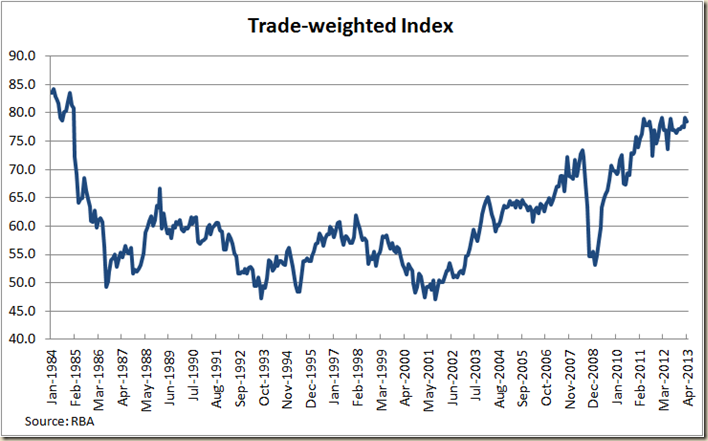 In the RBA’s eyes, it needed to do something, and the biggest thing it can do is lower the cash rate.

The problem of course is that while America’s employment situation is starting to improve, its equivalent rate set by the Federal Reserve (the benchmark rate) remains stuck on 0.13% (where it has been since December 2008).

And rather annoying while the RBA has been cutting the cash rate, it hasn’t done anything to bring down the value of the dollar, despite this cut reducing the spread between our cash rate and the USA’s benchmark rate. 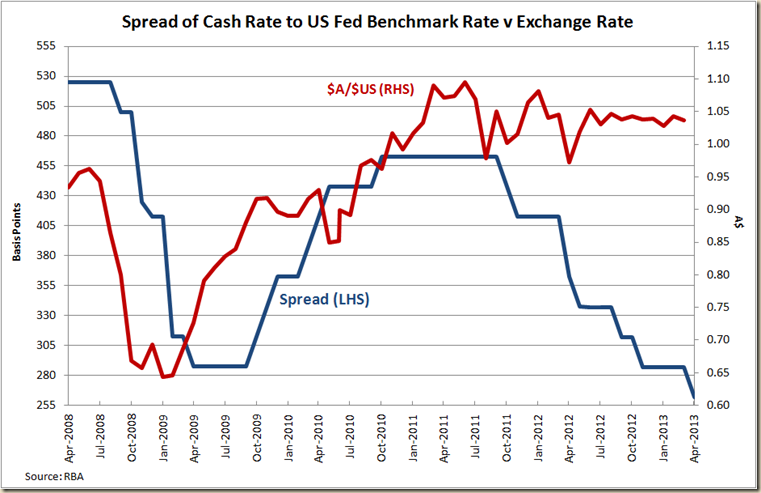 Essentially it seems it is not enough for our rates to go down to stop traders liking our dollar compared to the American, the yanks need to start doing some lifting as well.

But today see the RBA alerting the market that its prepared to work to get the value of the dollar down.

The difference can be seen in the statement issued today compared to last month.

Last month on the exchange rate, the Governor’s statement noted its stubbornness within a general paragraph about monetary policy:

There are a number of indications that the substantial easing of monetary policy during late 2011 and 2012 is having an expansionary effect on the economy. Further such effects can be expected to emerge over time. On the other hand, the exchange rate, which has risen recently, remains higher than might have been expected, given the observed decline in export prices. The demand for credit has also remained low thus far, as some households and firms continue to seek lower debt levels.

This month the exchange rate led its paragraph:

The exchange rate, on the other hand, has been little changed at a historically high level over the past 18 months, which is unusual given the decline in export prices and interest rates during that time. Moreover, the demand for credit remains, at this point, relatively subdued.

The subtle (or unsubtle if you spend time pondering the tea leaves of central banker's words) change from “higher than might be expected” to “which is unusual” pretty much suggests the RBA doesn’t think this is an anomaly that is going to sort itself out through normal market conditions.

But we have to realise as well that “normal” is a bit of a misnomer when we look at current monetary policy. The average of the cash rate for the past 5 years is now 4.23% – how low is that? Well back in 2004 when John Howard was boasting of record lows the cash rate was 4.25%, and it stayed at that rate for a mere 5 months before going back up.

So the monetary picture has changed not just a little but a lot. The 20 year average cash rate is now 251 basis points higher than the current rate.

Compare as well the cash rate to inflation”

Thus we are now in a position where the cash rate and the inflation rate are lower than at previous times when the RBA needed to run a similar expansionary monetary policy.

I noted this last year when I looked at the different level of the cash rate when underlying inflation is between 2-2.5%. 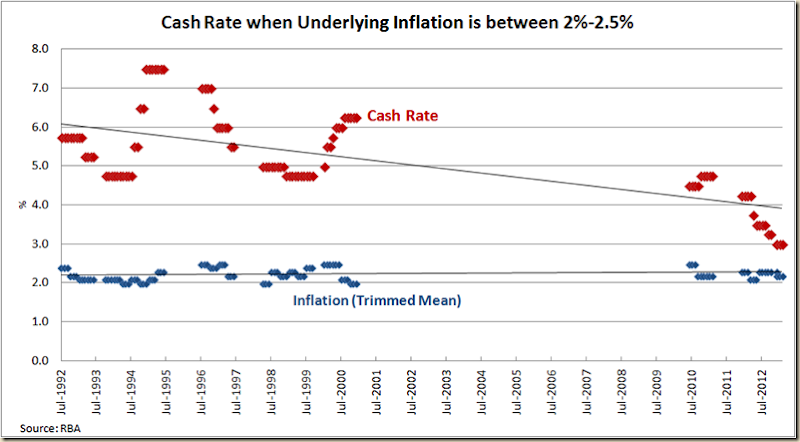 Times have changed. Normal is different to the old normal.

There’s not a hell of a lot of room for the RBA to move now. It can’t drop rate much more before it starts hitting the inflation rate. So in terms of stimulatory effects to the economy, most of the result from this rate will be through the secondary impact of the exchange rate declining.

Will it? Well the very early indications are good (note the times are GMT): 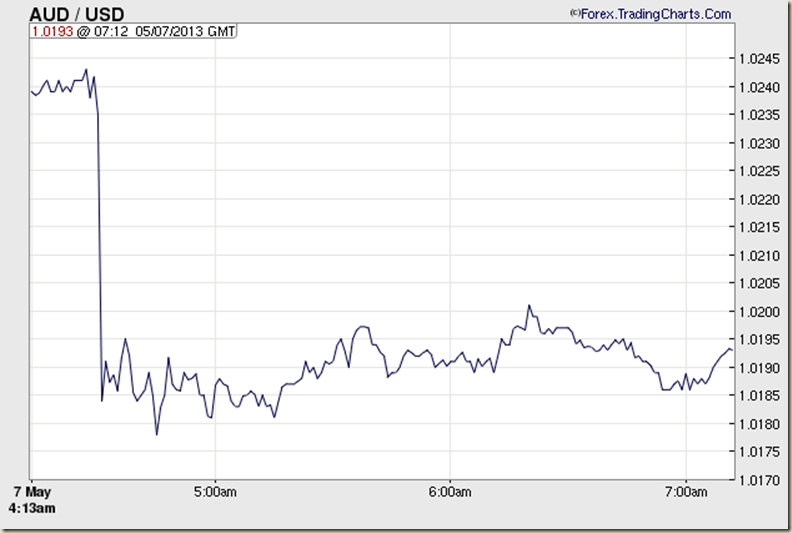 But that reflects more the market being taken by surprise. We shall have to wait to see if this drop in the cash rate finally gets the dollar heading down, or if the RBA needs to do more to let the market know it is serious about lowering the dollar – even if it means allowing inflation to rise.

And just a final thing. One of the wonderful things about the lowering of interest rates is it rather puts into sharp relief those who believe that Government debt causes interest rates to go up. As Tony Abbott said in April last year:

Everyone needs to understand that when the Government is out there borrowing $100 million every single day, there is going to be upwards pressure on interest rates.

I was just made aware that this morning on AM, Barnaby Joyce said this about the high dollar:

MARTIN CUDDIHY: The Coalition can't make it rain and you can't bring down the high Australian dollar, so how much realistically would change?

Ok then. Given the Govt borrows money by selling bonds, let’s have a look at the 10 Year Commonwealth Govt bond yield: 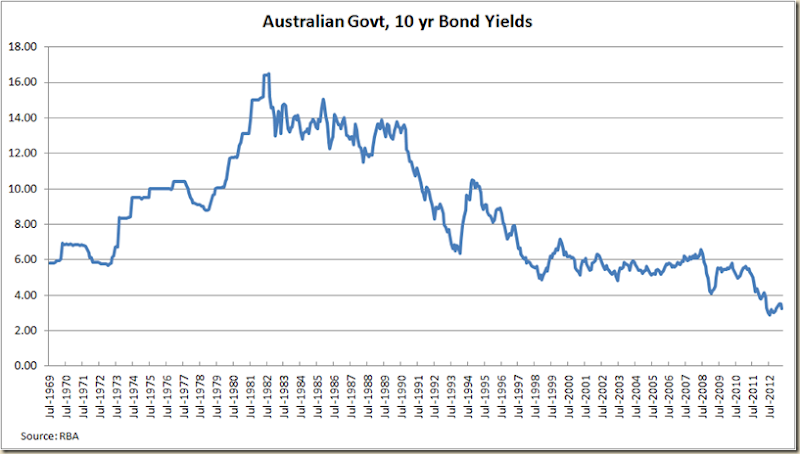 Yeah, the Govt is really having to raise rate to “attract funds”.

And yeah, I know. I know the next thing you say is “crowding out” where the Govt borrowing all this money is making it tougher for commercial lenders to raise finance. What did the RBA say about that today:

I only did a quick eyeball comparison between the real cash rate graph and year-ended GDP growth, but I reckon (abstracting from the higher volatility in GDP growth) the disparity between those figures would be high by recent historical standards as well.

That's a good idea Troy. Might have a look at that