Unemployment Rate: State v State (Or don’t be a woman in QLD)

As we move into State of Origin season let’s check out the employment situation on a state by state basis.

First let’s check out the employment growth in April in seasonally adjusted terms. It’s always a bit iffy to look at state unemployment this way but it’s fun nonetheless.

So class what did we learn?

If not much is your answer, you got straight to the honour board. Sure South Australia might be the boom state in Australia, but I think it unlikely.

So let;s go to the trend rate:

So how much do we know now?

If you said, just enough to be dangerous, then you get an A.

Yes WA is declining. There is a softening in the mining industry, but let’s not start suggesting it’s almost on a par with Tasmania, instead let’s have a look at the annual employment growth:

NSW has certainly be doing the best out of the eastern seaboard states, and WA has dropped a bit of late, but the past year has still been ok, but that 12 months rather hides what has happened this year.

Let’s just look at WA’s annual employment growth over the past 10 years: 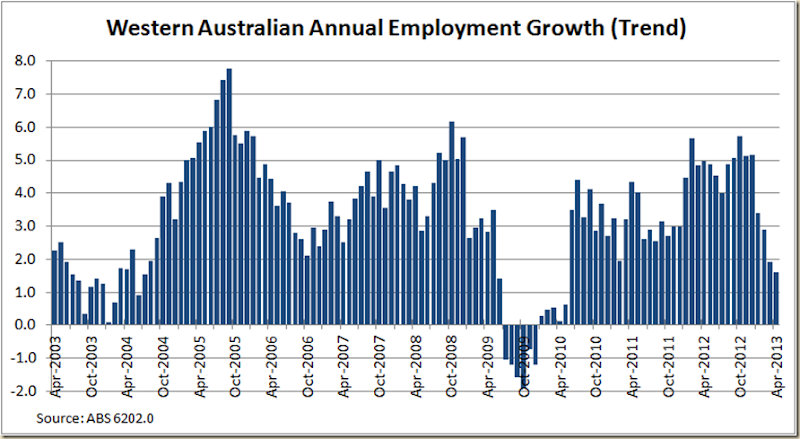 Now sure the labour force in WA is growing, but as we can see, there clearly has been a decline in the growth in the past 4 months. Indeed annual employment growth is now lower than it has been since before the mining boom (not including the GFC).

To also show just how much WA has come back to the pack, here’s a break down of annual employment growth in each state on a quarterly basis: 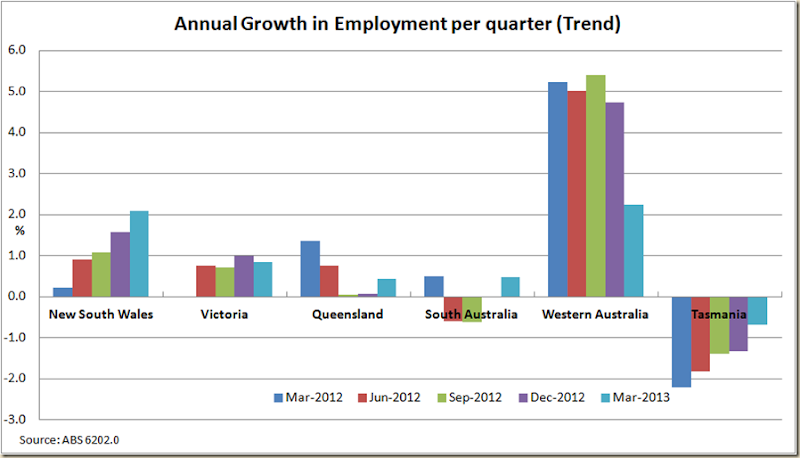 OK, now let’s look at the national unemployment rate minus each state: 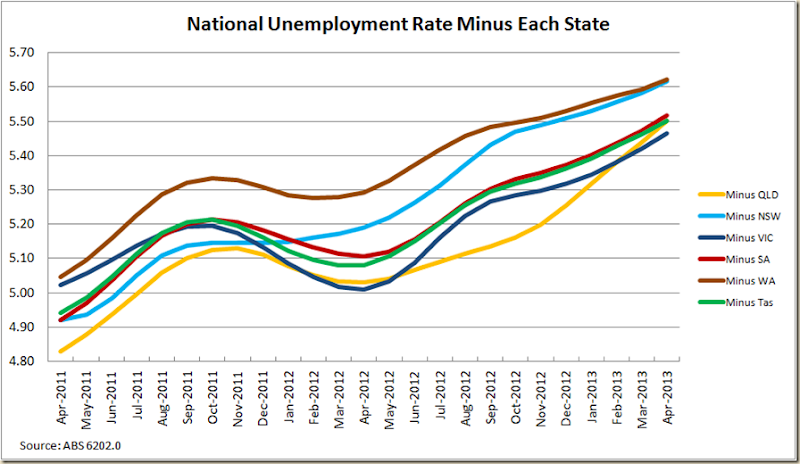 The big winner over the past 5 months on this scale looks to have been Queensland which has lifted itself off the basement. But there’s an interesting thing about Queensland’s employment growth – it’s been all Part Time.

A look at the monthly growth in employment over the past 2 years shows a pretty stark divergence from total employment growth and full-time growth in the sunshine state: 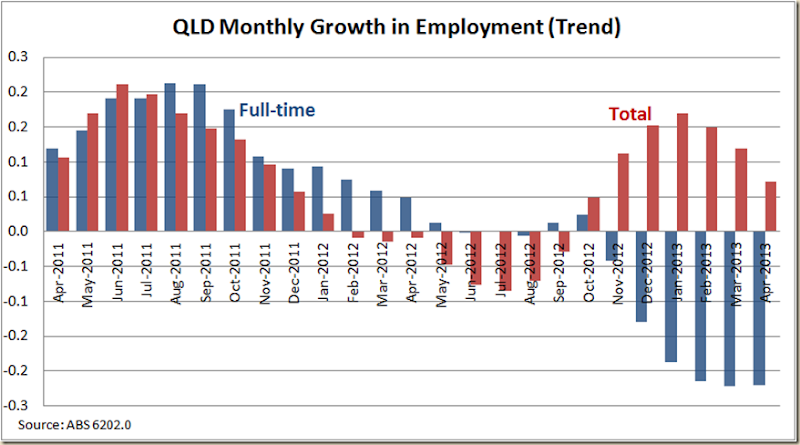 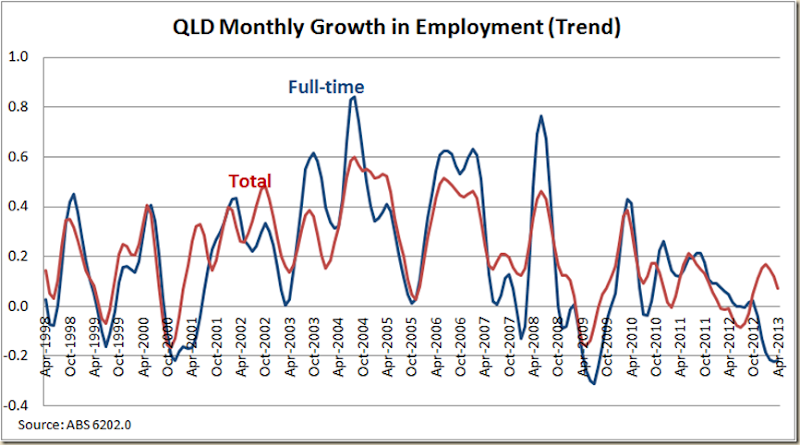 To get a real sense of what this means, let’s look at female employment in the past 18 months in QLD. We know that total women employment fell as the Newman austerity plan kicked into gear. In the past 8 months total employment for women has increased in QLD, but full-time employment has decreased. In effect those women who lost their full-time work 12 months ago have been able to get back into the work force, but only in part-time work: 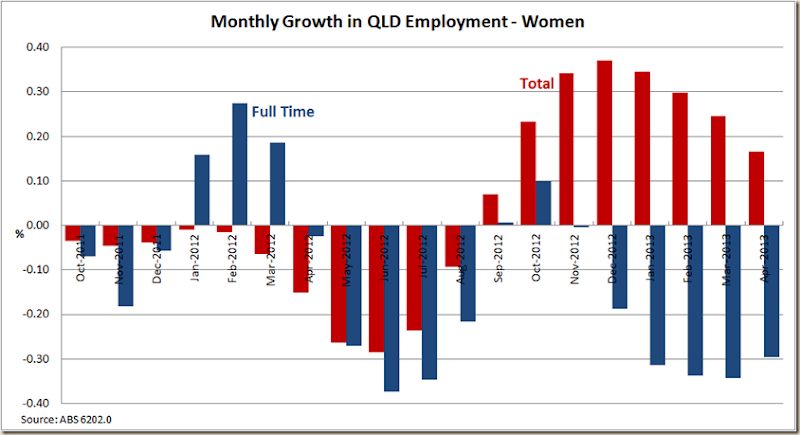 Indeed for women, the past 12 months have actually been WORSE for seeking full-time employment than during the GFC.

It takes some doing to come up with policies that do that.

Newman’s austerity program has in effect sent women back into part-time work. 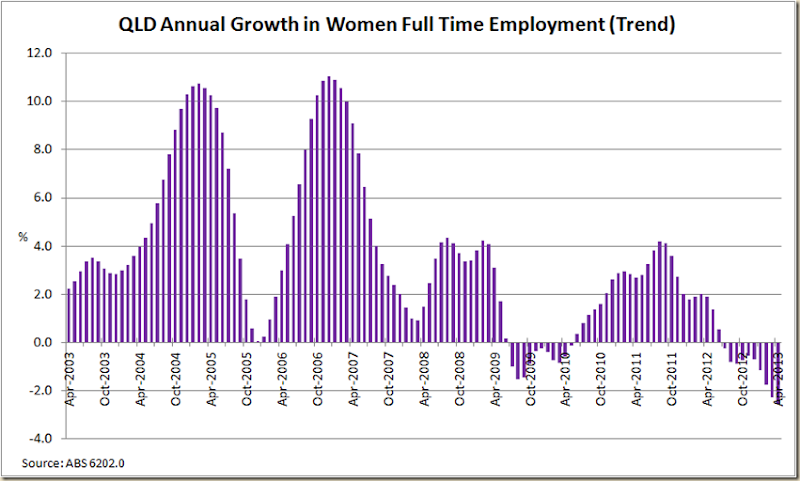 And so taking all of that into consideration, let us look at our monthly graph on which state is the biggest drag on the national unemployment rate. 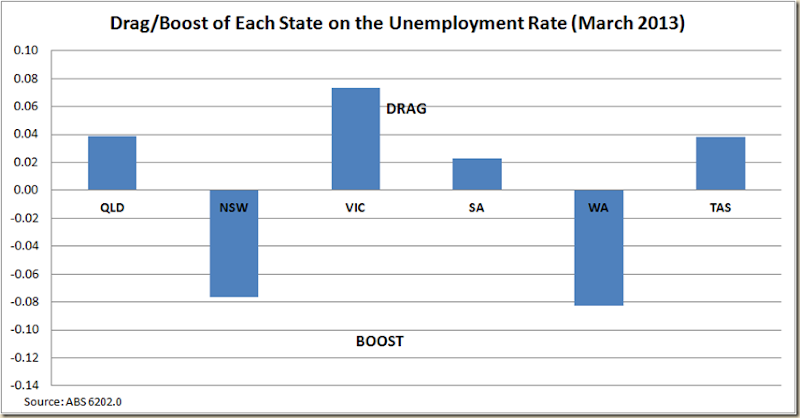 Western Australia remains the biggest boost to the unemployment rate (if a lower rate is actually a boost!), but will next month see NSW take over the top spot?

It’s a pleasure to comment upon this admirable performance wherein you have expressed the clarity in penning perfection about the subject. Simply, hats-off to your in-depth knowledge & impressive content quality. We will wait for more of your future updates.
drinking water plant