Daybreakers – Lots of fun and blood 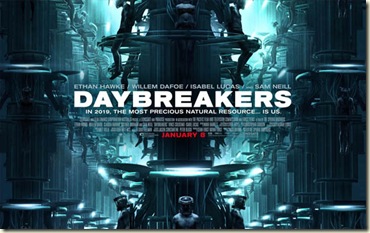 For a film about a society full of vampires running out of human blood, there sure is a hell of a lot of it spilt in Daybreakers, by the Australian writer-director team, the Spierig Brothers,

Daybreakers is set in the year 2019, some ten years after a vampire virus has infected most of the world’s population – meaning society now is mostly vampires, and humans are in the minority. As a result the world now runs at night time and the day time is for sleeping. The vampires do adhere to most of the conventions – no reflection, killed by a stake in the heart, burst into flames in the sun – but this is not your standard vampire fair, nor is it Twilight (I say that because it seems almost compulsory in every review of Daybreakers to mention that it is not like Twilight). The vampires in this society don’t appear to be completely soulless – they’re certainly not pure killing machines like those in Buffy or Angel. But this may be perhaps because they are now the majority, and there are very few humans to kill – they certainly don’t mind having a bite whenever a stray human comes into view. 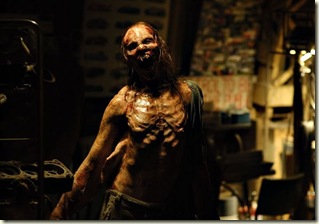 What the Spierigs have worked out however is that just as humans mostly prefer others to do the hunting or farming for them, so to would a society full of vampires.  And so instead of going around in packs looking for humans, people buy their blood – and have it in their coffee or with ice like scotch.

But this world has a problem: they’re running out of humans, thus running out of blood. And when they go too long without blood, these vampires turn from normal looking into hideous bat/demon types. 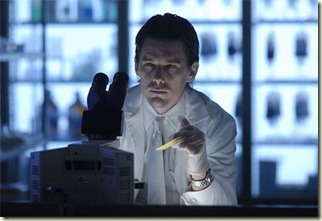 In this world is Edward (Ethan Hawke) a haematologist working for a pharmaceutical company trying to devise a synthetic blood. The head of the company is Charles Bromley (Sam Neil in Cardinal Wolsey mode – for those of you who watched The Tudors). He is not so concerned with running out of humans; just the blood. Edward however does have a conscience. He doesn’t drink human blood (only pig’s blood – which we also hear is running out). This puts him in conflict with his brother who is in the army and whose main job is hunting humans to be farmed for blood by Bromley. 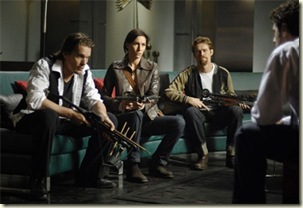 Through a car accident, Edward comes into contact with crossbow wielding human Audrey Bennet (Claudia Karvan) and ex-Vampire “Elvis” Cormac (Willem Dafoe). Cormac says he has a cure which turns vampires back to humans but needs Edward’s help.

This is the Spierig brothers’ second film (their first, the hardly seen Undead) and it has been a few years in gestation while they brought the money together (the old Film Finance Corporation put in $5 million). According to BoxOffice Mojo the budget ended up around US$20m, which is an absolute pittance in Hollywood terms, but the Spierigs use the money wisely, and it looks great.

The film is chock full of gore and blood (at one point a person head explodes like a giant blood blister), and they are pointedly not trying to be too deep about the film – no Avatar like messages about the real world here – sure you could say it is an allegory for over fishing the seas or over hunting wildlife, but the Spierigs don’t seem too interested in such things – they’re too busy having fun – and so will you.

Ethan Hawke plays the rather bland Edward quite well – he isn’t too mopey, and thankfully doesn’t spend too long pondering the life of being a vampire. Neil and Dafoe have lots of fun with their respective parts; and Claudia Karvan is good as the action go-getter Audrey (one critic described her as the Sarah Conner of the film, and that’s pretty spot on).

While the film doesn’t look cheap, you can tell that it is not a huge Hollywood blockbuster through what is not seen. The film could be another 20 minutes longer, and it really needs a big all out fight between Elvis, Audrey and their band of humans against the vampire army. The ending in some ways does feel a bit, “well we’ve run out of money guys, so we’ll ditch the scene we really wanted to do.” It is all set up for a scene like the ending of The Matrix where Neo and Trinity break into a building to save Morpheus and expend a copious amount of bullets, instead it well… it doesn’t really get there.

But there is much to recommend about Daybreakers – it deserves a good audience, and I think it’ll do gangbusters on DVD.

It also adds to the ever growing list of Australian films such as Bran Nue Dae, Mao’s Last Dancer, Bright Star, Charlie and Boots and Balibo that are proving that the days of Aussie films being seen as only depressing social realist flicks about drug addicts are quickly becoming a thing of the past. And that is a very good thing indeed.