Oscar is Always Wrong (except when it’s right) Part IX: 1995

Last year the following animated film made it in the top 20 yearly box office in America:
Up came 5th,
Alvin and the Chipmunks the Sqeukquel 9th,
Monsters Vs Aliens 11th, and
Ice Age 3 12th

This is all a very longwinded way of arriving at the 1995 Oscars; the year in which the Best Picture was won by Mel Gibson’s historical epic, Braveheart.

Just looking at the box office over the past 5 years compared with the first half of the 1990s shows that the film world is a very different place. Back then animation barely existed unless it was a Disney musical. Now it is a stock part of every Hollywood studio’s slate of films – and virtually none of them are musicals. By 2001, there were so many good computer animated films, that the Academy Awards brought in a new category of Best Animated Feature.

The reason for this can be traced back to one film released in 1995 (it actually came first that year at the box office): a little Pixar computer animated film called Toy Story.

Should have been nominated: Heat, The Usual Suspects, Se7en, To Die For
Should have won: Toy Story

Looking at the list of nominees, you’d be forgiven for thinking 1995 was a bit of a dud year for film. A year in which an Italian film was nominated, which I would wager next to bugger all have seen in the time since, and a pretty awful historical epic (which got most of the history wrong) won the top award.

Let’s have a look at the top 20 Box Office films for that year:

In terms of big budget films, it wa an okish year. Yes the horrible Batman Forever came second, and there’s probably not a lot of love around anymore for Pocahontas, but Goldeneye was Bond retuning to being a major franchise, Dangerous Minds is a decent film, and Get Shorty is an absolute hoot (and just missed out on my giving it a nomination for Best Picture). But underneath the big box office winners lay a lot of gems that would become viewed as among the best of the decade.

The absolutely brilliant (and runner up for Best Picture by my reckoning) Heat came 25th in the Box Office; George Miller’s live action animal fable Babe came 29th and scored some Oscar love; the almost perfect romantic comedy The American President came 29th; the whacky Twelve Monkeys got to 31st spot; Emma Thompson’s adaptation of Sense and Sensibility came 40th; Scorsese’s flawed (it’s always called that) Casino came 41st; the pretty heavy gong Dead Man Walking made it to 43rd; the favourite of many, many people, The Usual Suspects only got to 76th(!); and Nicole Kidman showed she could act in To Die For, which came in at 79th.

That’s actually a pretty good year; and makes for a tough revoting for Best Picture. 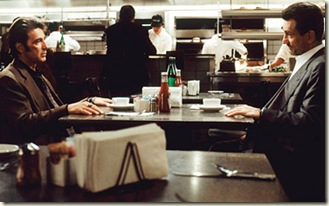 I would love to give it to Heat. It is almost the perfect crime film. De Niro and Pacino both are great (for both, great almost for the last time), the story is tense, the direction by Michael Mann is excellent (so good that everything he has done since has been somewhat disappointing), the denouement is perfect – because it ends with De Niro actually falling because he failed to heed his own advice – that you have to live your life so you can drop everything in 30 minutes. He doesn’t, instead he goes back for Amy Brenneman and thus he dies. It’s about as good a film as was made in the 1990s. It passes the re-watching test with ease. It’s been 15 years and it still feels fresher than anything in the cinemas today. It also has just about the best shoot-out scene in all pf film – the amount of shells expended during the bank heist is just unbelievable.

The Usual Suspects is truly a Video/DVD hit. Back then it was a film that few enough people saw, to allow you to be part of a nice exclusive band of souls who had the wit to go see it in the cinemas (and yes I can claim to be one), but since then it has grown and grown in stature. 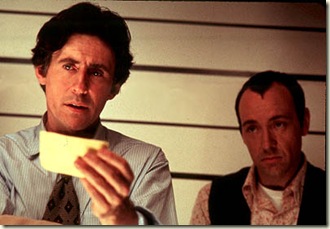 It featured Kevin Spacey in his pinnacle year of being the best supporting actor going around (he was also the serial killer in Seven). His role as Keyser Sose won him the Oscar for Best Supporting Actor, and what a pity he didn’t just stay with supporting roles. The film won Best Screenplay, and it is a cracker. You walked out of the cinema with eyes wide and just harbouring an absolute desire to go back in and watch it again to catch all the hidden clues that make up Keyser Sose’s story.

The problem is on DVD you can go back and watch it again, and you realise that the whole thing is actually a bit of a con-job. There’s no way you can pick any of the “clues”, because we don’t get to see the pin-up board in the office or the label on the coffee cup till the end. And if it is all made up, then who is the lawyer at the end? Basically you can’t work out what is real and what is made up no matter how many times you watch it.

It is an enjoyable film, but not one that stands up to too much thought. It is probably why the writer, Christopher McQuarrie, hasn’t gone on to do much and the director, Bryan Singer has. The genius is in the direction and the acting (Gabriel Byrne is excellent); the script is not as smart as it thinks it is. 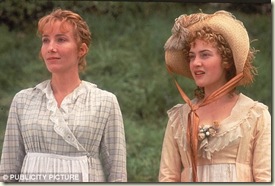 Others such as To Die For (great satire), Sense and Sensibility (one of the best Austen adaptations – with Emma Thompson and Kate Winslett nearing perfection), and Seven (as good a horror film as you could ask for – so damn scary I haven’t seen it again since seeing it in the cinema all those years ago, and I still don’t like thinking about it) all make for an excellent year.

But they all come behind Toy Story.

The kids film that came good at the Oscars that year was Babe (and it is a delight – though a slight delight). But ask yourself, how many films have you seen recently with live animals “talking”? The computer animation of Toy Story on the other hand changed Hollywood. Just as well it is also a great film.

The story is one of those “why the hell hasn’t anyone ever thought of this before” stories. The premise that kids’ toys actually are alive and just acting as inanimate when people are around is pure brilliance. Every kid always worries about his or her toys when they are left at home – kids worry that they’ll get bored, or lost or will get up to mischief. The genius of John Lasseter was to put it on film. And the genius of Pixar was to realise that computer animation was at a point where it could sustain a full length film. 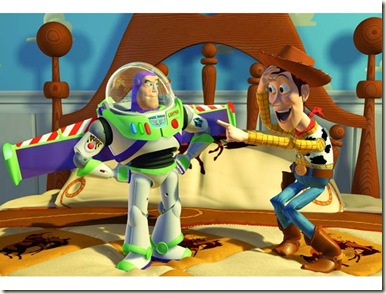 Everything is right about the film – the voice actors are spot on – you could not conceive of anyone else as Woody or Buzz than Tom Hanks and Tim Allen. The other toys – Don Rickles as Mr Potato Head, Wallace Shawn as Rex the pretty tame dinosaur and John Ratzenberger as Hamm the piggy bank make the film a joy as their nuance gives depth and allows adults to pick up on subtleties not meant for the kids.

Pixar films always tread a nice line between grown-up humour and heart warming children’s fable. That they have been able to balance this line for so long is a remarkable achievement – they have not really had a flop. Of their nine feature films, A Bug’s Life has the lowest box office (and probably lowest critical response), but those nine films have made in the US alone a cumulative $2,424,817,261. That’s nearly two and a half billion dollars folks. And their DVD sales? I can’t find an actual figure, but if you are a parent of children born in the last 10 years I will put a small wager on you owning a good half of the nine, and I would not be surprised if (like us) you own all of them (as well as the Madagascar films, the Shrek films, the Ice Age films…).

And re-watchability? Well I’ve probably seen it (or more accurately had it going on in the back ground)  a good 20 times since my 6 year old daughter was born. She loves it, and though I can repeat all the dialogue, I have to say I love it as well:

Buzz: I've set my laser from stun to kill.
Woody: Oh, great. If anyone attacks we can blink em' to death.

Buzz: You are a sad strange little man. I pity you. Farewell.

Woody and Buzz have as good a back and forth as any action/comedy duo in the last 20 years. It’s not quite Bogie and Claude Rains, but it’s a hell of a lot of fun.

Sure there are holes in the script – like why if Buzz doesn’t realise he is a toy does he obey the toy rule of going inanimate when humans are around? But such things are minor (though they are things that would bug me were I the writer, to the point that I would abandon the whole thing – reason number 256 of why I am not a successful screenwriter). The film owes a debt to The Simpsons for that program put adults of a mine to able to enjoy animation, and that such films could use a humour well above the childish level of The Flintstones – it was ok if some of the jokes flew way above the kids’ heads.

The film looks beautiful, has a great script that makes you laugh and cry, has excellent work by the actors, a nice score by Randy Newman and it has influenced so many films that you can argue it has changed Hollywood. All up, I think that makes it more than worthy of the Best Picture Award for 1995. 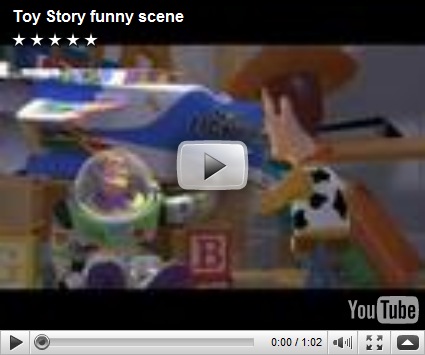 Much of the writing was by Joss Whedon, who would later create Buffy the Vampire Slayer and Firefly, also known for their sharp dialogue. From an interview, quoted on Metafiler: "I think the thing that I can point at and say, “This I am proud of,” is really the voice and the sensibility of the characters, keeping them from being that sort of old-school Disney."

In his writing years, Whedon also wrote the good bits of Speed:
"Swat Cop: Anything else that'll keep this elevator from falling?
Jack: Yeah. The basement."