On the QT: No Smoking Gun to help this Dead Sheep

In last night’s 7:30 Report Chris Uhlmann made mention of “a second MinterEllison” risk report provided to the Department of the Environment, Water, Heritage and the Arts, that was apparently not released to the public last Friday. I thought ok, here we go, they’ve found a smoking gun. I waited to see this morning what damage would befall Peter Garrett.

In the morning AM, reported on this second MinterEllison report (actually a risk register):

It raises as potential risks poor quality insulation, possible house and fire damage, an insufficient number of auditors and the capabilities of installers.
It quantifies the cost of the risks in the hundreds of millions of dollars but also spells out the steps being taken to manage those risks.

Wow, hot stuff one might think. And then you read it. And what you find is it is not a smoking gun at all. All it is is a pretty standard risk register done for any type of program that any Government department would run. It is hardly a “damning report” (as suggested by Mark Colvin on ABC’s PM). Yes it does mention the risk of house fire under Point 6:

Installation quality and compliance:
quality of installation / control by installers and compliance structures may be inadequate
• Poor quality installations
• Compliance cost (to Dep’t or industry) may be excessive and process may be ineffective
• Safety - house fire/damage
• Insufficient number of auditors

But so what? What we have here is a standard risk report – ie it lists the risks associated with the program. It is not “damning” to mention the risk of fire, the whole point of a risk report is to list the risks!

• Developing links with ACCC and other regulatory bodies
• Information available through call centre and is being reviewed as the business model is being developed
• Strategic communications strategy in place
• Communications channels with industry have been identified and are being developed
• Regular communications with States and Territory regulatory bodies in place
• Early installation guidelines include specific quality and safety requirements – installers must be verified – hooked into Australian Standards
• Breach reporting system in place. Site inspections – planned to begin early 09/10
• Assessing training requirements and discussing with DEEWR
• Internal compliance and monitoring system under development
• Technical Working Groups with industry covering safety and quality of product

And how did MinterEllison assess the Department’s management strategy?

Far from being damning, the report showed that the Department had recognised the risk of house fires and poor quality installations, and had come up with strong measures to address that risk.

And yet apparently this is damning…

There were three points which MinterEllison stated the risk management was weak – two related to the fast introduction of the program, and the other was “political risks”. Does the media and opposition really think the Government shouldn’t have gone through with the program because it may face “political fallout”?

The problem with the first two risks which MinterEllison graded as having a weak management response is that they do not consider the reason for the introduction and speed of the program in the first place – to create jobs to combat the global financial crisis. MinterEllison recommended holding off for 3 months; the problem was that holding off 3 months would have meant the program would have failed to be a quick and targeted response to the GFC. Now that’s ok, MinterEllison were not asked to consider such economic costs – but the Government certainly did.

The cost of the two risks highlighted by MinterEllison were put at $20m-$60m and $20-$145m – so at worst about $200m, this out of a $2.5 billion program. The report does not make mention of the cost of not implementing the program in terms of unemployment and reduced GDP, reduced business and consumer confidence, all of which benefitted strongly from the program.

Does the risk register make any mention of loss of life? No.

Does it make any mention of fraud? Yes (Point 5). Was the Department’s management of the fraud risk adequate? Yes.

Was this the only advice the Department used to come up with it’s own risk assessment? No – and a bloody good thing too.

The MinterEllison risk register actually has bugger all for the Opposition to work with – especially given the disgusting work by Abbott and Greg Hunt to accuse Garrett of being responsible for the deaths of four insulation workers.

Which brings us to Question Time. 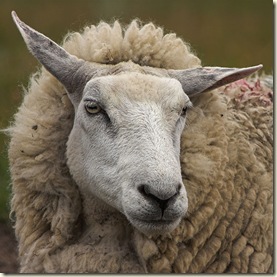 During yesterday’s Question Time, Fairfax journo, Tony Wright tweeted that the work from the opposition reminded him of the line by Paul Keating that the attack was “like being savaged by a dead sheep”. So it was again today.

Abbott opened up the “attack” by asking Garrett if he expected the Parliament to believe his previous claim that the Department received the MinterEllison report 6 days after it was commissioned. Garrett stood by his statement. As well he should, having read the document, if it took MinterEllison more than 6 days, then I’d accuse them of dragging their chain. I’m not sure how long Abbott thinks it should have taken them to do it.

The point was however that in all of the eight questions they asked Garrett, not one actually went to the contents of the report. They all were of when did you read it, when were you informed of it line of attack. It was completely inane and lacking in venom, especially as Garrett made it clear again, and again (and again) that the MinterEllison report was but one of a number of reports/advice from stakeholders that the Department had used to advise him on the risks of the program.

It is common bloody sense that this would happen. But no, sigh, according to the media, the report is “damning” because it mentions house fires. Does the media want us to get to a point where Departments are scared to list a risk because the mere mention of it is enough to damn their Minister?

The hide of this Liberal Party took a greater turn when Sharman Stone got up to ask about the poor hardware store owner in a town in her electorate who had got into the insulation business because of the scheme and who now would have to lay off workers.

Yes, you heard right – the Liberal Party is complaining that the stopping of a program is causing the loss of jobs despite the fact it voted against the program, said the program would not create one job, and which it then demanded be stopped!

Good luck with that logic. No wonder Garrett accused them of having crocodile tears. He was absolutely spot on – in fact I think he should get bloody angry.

Well done Liberal Party (and the media). All your huffing and overblown shite has ended a program which had actually created masses of employment for low-skilled workers at a time when they were the first to be sacked, and which had actually been managed pretty bloody well given the size of the industry prior to the program beginning and given that it caused the introduction of tighter safety standards than were in place before. Bravo. You should all feel so proud.

You can talk all you like about the Liberal Party’s terrible tactics during Question Time – and you’d be right – but even with such pathetic attacks, if there was anything that showed the Minister was negligent in his handling of the risk, if he was aware that deaths could occur and yet did nothing about it, if he had done nothing to ensure minimisation of fires from insulation, then he would be gone.

And yet he is not (though geez, you have to wonder what the prosecutorial mind of Turnbull would have done with this report…).

If the Opposition really had some brains (and the media as well) they would be using the report to ask questions about the risk management strategies, eg:

You see it’s not enough to come up with the strategies – you actually have to do them. Did the Department? I would assume they did, but it would be nice to know. And it would be interesting to know if the Minister knows, though not crucial – he would only be advised that the risks were being managed as planned – if they weren’t it’s the Department which would bear most of the responsibility for explaining why.

Instead all we got was faked sorrow for the loss of jobs from a scheme the Liberal Party didn’t even think created jobs. We got inanity about wondering when was the Minister informed of a report which has nothing in it which suggests the Department or Minister was negligent.

After the Grech Affair, you’d think the media and the Opposition would have learned to actually wait for the gun to be smoking before they say they smell something.

Take the blinkers off!

Of the 19 risks that MinterEllison assess 3 remain intolerable even after the mitigation actions. Yes, one of these is "political risks" but the others mention the risks of cost blow-outs and non-delivery of the program. Because of this they recommend delaying the scheme until September. Remember the scheme got an extra $1.5bn in MYEFO so they were right about this risk.

The question is why did the govt proceed even despite this recommendation? Whatever they did obviously wasn't enough. What a waste of taxpayer's money.

So Matt C., you'd rather the government payed Unemployment Benefits with taxpayers' money instead?
And, 'political risks' are 'intolerable'???
'Cost blow outs' 'intolerable'???
(Well then, Howard should hang his head in shame, just have a think Matt C. about the Middle Class Welfare cost blowouts).
'Non-delivery of the program' 'intolerable'? That I agree with, and you can thank the Opposition for that.

The ABC and News Ltd. appear to have a vendetta against the Rudd government. They appear to be leaving no stone unturned in their efforts to weave any shred of 'evidence' into a tissue of lies that they then use to beat the Rudd government about the head with.
Since when were the ABC allowed to have an agenda in this way? And it appears to be well-co-ordinated, if you go around the dial, from one end of the day to the other, from one program to another, from one medium to another.
What I want to know is, where do editorial decisions like this originate? Who co-ordinates such attacks? Why can't we, the people, have some say about it?
Maybe it has something to do with the fact that the Opposition appear to have Press Officers permanently camped out in all the media outlets at the moment, feeding them this sort of bs, and probably not giving them time to think twice about anything other than what the manic monkeys in the Opposition are trying to beat up from day to day before the election.

Flubber "intolerable" is MinterEllion's term not mine

Matt C - you didn't refute Flubber's point. Nit-picking a minor part of the argument is tamtamount to admitting you don't have an comeback to the rest of it.

Matt C said that MinterEllison used the word "intolerable". Can you point to exactly where it is Matt, as I have the full report and nowhere can I find "intolerable".
I am very well aware of the section detailed "Political" and the use of the phrase "Applies in broadest sense of political" thererin, but I'd hate to think you were "misquoting" a legal document by equating any of this section with the tag "intolerable".
LegalEagle

LegalEagle - Correction please. The word should be "therein" and not "thererin".