On the QT: Game and Set

Question Time can in some ways be seen like a tennis match. Each answer by a Minister is an attempt to hold his or her serve as the opposition tries to break them. Unfortunately for the opposition, the Government also gets to serve against its own side, which means, unless a Minister completely stuffs up a response to a Dorothy Dixer, quite often the best the opposition can hope for is to take the set to a tie break, get a few lucky net cords, maybe the odd call by Hawkeye to go their way, and a 7-6 win.

Except today they seemingly had a good chance to break serve and take the set.

Yesterday it was noted by many commentators that the opposition had completely let Peter Garrett off the hook over the ceiling insulation and green loans scheme. Today it looked to be the day that Garrett would have to step on the court and show us what he’s got.

The problem of course is that whole extra day he has had to prepare. Yesterday he would have been a bit cold and rusty; today he came out having spent the last 24 hours on  the practice court, and no doubt also having had to listen to a thorough explanation of the game strategy from coach Rudd.

And so when the first question came up today from Greg Hunt it did seem like the Liberals were a day late. Garrett’s first game was pretty solid – a few unforced errors, the game did go to deuce, but he was able to get through.

Luckily for the Government they had Barnaby Joyce to take some of the heat off and allow Garrett to drink down some Gatorade at the change of ends. Rudd was given the first Dorothy Dixer of the day, and the question was so targeted he may have well have been asked “Why is Barnaby Joyce a goose?” Rudd put down some good serves – his line of Tony “Straight Talk” Abbott was a definite ace – and when he referred to Joyce having Abbott’s “ring of confidence” it was a pretty nice forehand down the line to win the game.

The next question was from Abbott to Garrett. It was not very well structured, given it contained about 10 questions, but the point was sort of made. Garrett made some unforced errors when he got stuck in acronym land, and at one stage he was down break point when he referred to “the real time politics of the environment which we inhabit now”. Only some good talking points and a letter given to him during the answer enabled him to hold serve. 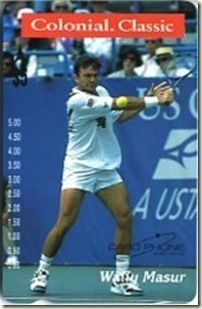 Next up was Wayne Swan – the Wally Masur of Australian politics (I have a feeling I’ve stolen that line from Bernard Keane, but if not I’ll claim it!). Swan joined in the Barnaby kick fest and he served out his game in his usual methodical fashion. Swan only ever gets into trouble on serve when he tries to emulate Lindsay Tanner. And he was in danger of making a few errors when he compared Abbott’s decision to appoint Barnaby Joyce to being like Parachute pants – popular for a while, but no one wants to be seen dead in them now. It was a cross court winner, but we did go to Hawkeye to see if it had landed out. It was just on the line.

And then Andrew Lamming was up to try and break Garrett with a question about assessors for Green Loans (or something – the problem with many of the questions by the opposition is they had no cut through). By this time Garrett was finding his range with his ground strokes and proceeded to welcome the question because it enabled him to take the House on “a journey through the assessment process for assessors”. This was not a journey the House really wanted to take, but rather than produce howls of protest and calls for his head, the opposition pretty much took it like lambs (mostly because Garrett was actually answering the question, and so there was no call for points of order on relevance). He sat down having held serve – a bit shaky, again the game went to deuce, but he got through it.

Next up Lindsay Tanner had the good fortune to kick Barnaby Joyce. 40-love. Too easy.

And then something inexplicable happened: Joe Hockey asked Lindsay Tanner a question about cost blow outs. What on earth possessed the Liberal tactics committee to ask Tanner a question? They had Garrett struggling on serve – looking likely to be broken any time – and they decide instead to target the ALP’s best performer. It’s like saying, well I’ve got Andy Roddick struggling, instead of beating him I’ll stop and challenge Federer to a match. Insane.

You could also tell Hockey is not having fun at the moment, because when the ALP laughed at him for asking Tanner a question (essentially laughing because they all knew he was trying to clean up Barnaby’s mess) Hockey angrily said “oh they’re laughing, typical Labor with money”.  He was in full Mr Grumpy mode, and it is not a good look.

It was just a dumb tactic. And Tanner killed him. He smacked across some huge backhands that also damn near took out Tony Abbott as he stood at net.

The next Dorothy Dixer was to Nicola Roxen and it allowed her to indulge in her favourite sport of Tony Abbott impersonation. She ridiculed Abbott saying on the Alan Jones program that he hadn’t taken out $1b from the Health budget, but just that “the rate of growth [of the Health budget] slowed somewhat”. It was a beautiful line from the Alicia Molik of Australian politics (ok, I know I’m starting to stretch it here). 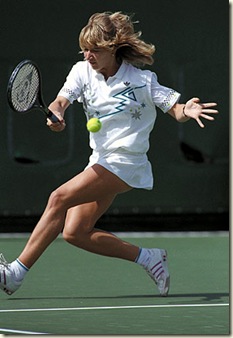 Then something even more amazing happened – Warren Truss was too slow to get up and so he missed his turn and the ALP got another question! This is tantamount to double faulting every point in a game. It was even worse, because the next Dorothy Dixer was to Julie Gillard (Steffi Graf – last one I promise) on women on workplace agreements and parental leave.

She absolutely smoked down four serves that were unreturnable. She too indulged in some Tony Abbott impersonation, repeating him saying on Alan Jones, that the SMH had rather jumped the gun on the parental leave policy story. At this point Wilson Tuckey let go with a long point of order that made no sense. Julia responded by saying “Wilson, the modern face of Liberalism, it's so attractive and so intelligent". About 30 seconds later (at which point she must have finally clicked that Julia had said something), Julie Bishop got up on a point of order asking Gillard to withdraw. She did, saying “I said the wrong thing, the modern face of Liberalism if Bronwyn Bishop”.

By this time the questions to Garrett seemed a long time ago, and in actual fact, because the Libs had missed a question, and had asked one to Tanner, it felt like the ALP had had four Dorothy Dixers in a row.

It felt like 5 in a row when the Libs next question was not to Garrett, but to Gillard! Inconceivable! It was from Pyne on the school laptops blowout in costs. Gillard having had so much fun in her previous answer just let rip at Pyne and Abbott and the entire Liberal side of life. Julie Bishop had had enough and had a jibe at Julia wondering if she had seen a hairdresser this week (yes that’s the usual level of wit from Julie Bishop).

After a Dorothy to Jenny Macklin, Joe Hockey got up and asked another question about cost blowouts to Lindsay Tanner. Inconceivable times two! At this point the ALP was up 5-3 and serving for the set. Lindsay put them away.

The day’s play was effectively all over. Abbott tried to ask Rudd a question on integrity, that had Rudd feeling so loose and relaxed that he let fly with volley after volley. By now, all that was left was for Craig Emerson to have some fun quoting Monty Python and Billy Joel, to call Barnaby Joyce Barnaby Bjelke-Petersen and it was time to roll up the net and head to the clubhouse for some Pims and Lemonade.

And the man drinking it down with the most relish was Peter Garrett, who must have been wondering how he could ever be so lucky.

Tomorrow the Libs no doubt will try for the third day in a row to break Garrett’s serve; but on the past two days’ performances, I wouldn’t be backing them to do it.

Good one Grog, next best thing to actually being able to watch it.

i was on the edge of my seat. game set and match