No wonder Begg-Smith avoids the media

Yesterday Dale Begg-Smith won silver medal in the Men’s Moguls at the Vancouver Winter Olympics. It was a great effort – given that he was coming off a knee surgery only 12 months ago, and the conditions did not suit his style (which is at its best the slicker and tougher the conditions are).

But today’s Sydney Morning Herald had on the front page an op-ed piece by Peter Fitzsimons: 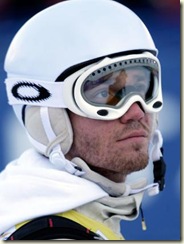 You see Begg-Smith didn’t smile enough on the podium when he got his silver medal – or at least not enough for Fitzsimons’s liking. Did the article mention anything about him coming back from knee surgery? Did it say anything at all about his performance. Nope and Nope. Instead there was some bollocks about the reason Australian don’t like him is not because he has a foreign accent or a hyphen name (!). No it’s because he doesn't do good interviews or smile enough.

The fact is he didn’t smile all that much when he won four years ago at Torino – so you can hardly say he is a sore loser. Obviously the guy doesn’t go for big showing of feeling (sounds pretty Australian to me).

Yesterday in The Punch Anthony Sharwood wrote a piece:

Is Dale Begg-Smith entitled to be a sourpuss?

Here is a line that Sharwood, the Senior writer for Australia’s biggest sports magazine Alpha, wrote in his piece:

Begg-Smith first showed his recalcitrance four years ago in Torino, when he was repeatedly quizzed about his business.

OK, so the media might’ve asked an extra question or two about moguls. But really, they’re snowy bumps and he skis them better than anyone. What else is to know?

Get that? A sports journalist telling us the sport is essentially yada yada yada. I can imagine him writing of Federer, “but really tennis is just hitting a ball back and forth, and he does it better than anyone. What else is there to know”.

And this guy is a sport journo? You’d think he would actually be interested in sport…

Sharwood throws this away in at the end of his article: 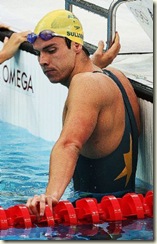 For what it’s worth, I’ve heard that Begg-Smith is incredibly popular with locals and kids in Perisher, to whom he willingly gives his limited time in the brief southern hemisphere training season.

You think if he wanted to slant his article differently he might have given that more prominence?

The odd thing is that being disappointed by coming second is not limited to Begg-Smith; have a look at Eamon Sullivan in Beijing.

But then Sullivan is easy on the eyes and gives a nice press conference so all is forgiven. Ditto the snipe from Fitzsimons about Begg-Smith spending most of the year in Vancouver. I don’t recall anyone being too up in arms about the fact all our best golfers live in America because (like Begg-Smith) that’s where the sport is, or that Pat Rafter for most of his career resided in the tax-free haven of the Bahamas. But then Pat was easy on the eyes and gave a nice interview…

The thing is when Begg-Smith went over the line he did show emotion – fleeting yes, but nonetheless it was there. And when he was beaten by the Canadian skier, he was the first to give him a congratulatory hug and was smiling while he did it. And funnily enough while watching the medal presentation he did smile when he got the medal – he just wasn’t during the official photos.

And as for interviews, well tonight I saw an interview he gave Matt Shirvington on Foxtel. He was gracious and very humble. When asked how it felt to be Australia most successful Winter Olympian, he immediately talked of how the team was full of great young athletes and they were all building towards a stronger showing in four years time – essentially saying yeah he might be the most successful now, but he hoped others would soon beat his achievements. So we have a guy who when asked to praise himself instead talks about other young athletes in the team. Yeah, let’s rip into him. What a prick.

Look, I would not say I was a Begg-Smith fan (I’m not into the mogols to really have a care either way), but when I snuck into the staff TV room to watch his run yesterday I sure was willing him to win. That he doesn't give enough interviews, or smile enough to please the sports “journalists” of this country, for mine, says more about them than him.

...and he donated some of his winnings from the world cup events to Haiti:
http://www.fisfreestyle.com/uk/news/dale-begg-smith-donates-prize-money-aid-haiti,27.html

People just hate everyone who isn't out to get their approval 100% of the time and doesn't behave exactly like every other person out there.

IMO, leave the judging to the judges and enjoy the skiing! :D

Thank you!!
I hate all the people villainizing him and calling him a douche just because the media is saying all this crap and he doesn't show a lot of emotion. Again, I'm not his biggest fan either but it does anger me. I read a Canadian article that pretty much raised the same issues that you did:

Just goes to show how much media can influence people.

I certainly agree that the media have been very harsh on him. It's very hard to judge a person without actually getting to know them, I know there are plenty of sports stars who seem really nice in interviews but then have a reputation of being jerks when away from the public eye.

I wonder if anyone has a link to a good, long, in-depth interview? Would be interesting to hear a bit more about what type of guy he is.

The weird thing is why he just doesn't smile a bit more - when watching the aftermath of Monday's event he stuck out like a sore thumb, showing so little emotion.

I don't think less of him because of this, just wonder why he doesn't make a bit more of an effort to appear friendly in the public eye. I mean how hard is it to put on a smile, wave to the fans? What is the reason he doesn't just do that? Wouldn't that be the easier thing to do (compared with dealing with so much criticism)? He must really feel strongly about not showing emotion.

Maybe he's just really humble, maybe he just doesn't like showing emotion. I just worry that he has some deeper psychological issues.

there is a reason why begg-smith doesnt like to give interviews, and it has nothing to do with his being humble.

the guy is afraid that he will someday have to answer tough questions regarding how it is that he made millions from an internet biz that even he is incapable of describing.

most internet phenoms are only too happy to tell the world about that great idea that brought them millions....just ask mark cuban

but begg-smith refuses to talk about his...wonder why that is

here's a link for a website it just shows a bit of him training and stuff and a tiny bit of interview, but it still works
http://video.au.msn.com/watch/video/interview-with-dale-begg-smith/xc9a32e

The Australian media just don't get the winter games, they are stuck in a team sport mindset, which doesn't work for the winter games. Having been to 3 winter games now I have been lucky enough to meet many of the athletes and families, and a bad attitude is a very rare thing to find or even hear about. Sure everybody wants to stand on the podium, but even when they don't they are genuinely happy for those that beat them and have received a medal.

This year I watched Dale win silver from a bar in Calgary(flew out to Vancouver the next morning), had a great time with the locals with plenty "if he wins we are claiming him as Canadian" lines coming from the crowd! Pretty much everyone was impressed with his result as no one really expected him to be competitive due to his knee