On the QT: The Minister for Doing Nothing But Reading Reports

Today’s Question Time was preceded by the Secretary of the Department of the Environment, Water, Heritage and the Arts, Robyn Kruk, appearing before a Senate Standing Committee Inquiry into the Efficient Homes Package. 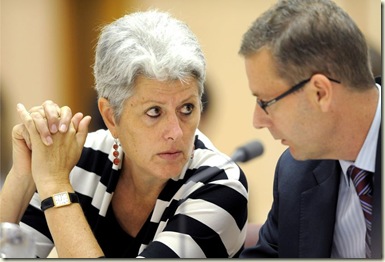 In the committee Kruk was asked repeatedly about a risk report done by law firm Minter Ellison, which Garrett revealed he had only read 11 days ago. When asked why the Department hadn’t provided the report to the Minister, Kruk responded that the report was embedded in the advice provided to the Minister. On the level of risk in the programme she said:

“There is probably only one way of ensuring a risk free environment in this regard and that is not to go into ceilings to put in place insulation.

“The risk mitigation strategy was intended to actually look at what could be done to mitigate that risk. The changes that were made to that program made significant changes to what needed to occur for workers to go into ceilings. They were not in place before. If your standard is for a program of this type to be totally risk free that is not an achievable goal”.

With regards Garrett not seeing the Minter Ellison report, she said:

This is actually pretty standard. There is no way on earth Ministers would (or should) read every report their Department receives. My God the amount of reading that would be! It would be all he or she would be doing. In this case, the Department commissioned the report from Minter Ellison (they also received other reports) and they used the report to frame their advice to the Minister.

That is how the public service works – the public servants read all the boring (but necessary) reports, have all the boring (but necessary) meetings with industry stakeholders, and they then advise the Minister.  The Department will attach the report to the brief if the briefing is actually about the report – such as Annual Reports of Government agencies, or if it is a major review – such as the recent one into the funding of sport, in which case the Report would actually have been presented to the Minister. Risk assessment reports for programs however are strictly bureaucratic level stuff used to feed into the Department’s own advice to the Minister on the program.

The question should not be if or if not Garrett has read the actual report, but whether the Department used the report to inform its advice to the Minister (which it did), and then whether the Minster acted on that advice (which he did).

The rest is just a media beat up. I’m sorry, but it is.

A Department gets a report, uses it to advise the Minister, the Minister acts on the advice. What the hell else is he supposed to do? Is the Minister supposed to think – nope, the Department isn’t up to it, give me all of the reports, I’ll do the risk assessment myself, I’ll meet with all the industry groups, and then I’ll advise myself on something which I am not actually an expert on.

Please. Maybe if he was a local councillor, or head of a school council.

However, none of these things happened, which is most likely why the LNP was once again totally inept in Question Time.

Prior to Question Time both Rudd and Abbot praised the announcement of Mary MacKillop being made a saint. Abbott oddly took the occasion to say that MacKillop didn’t ask for the Government to help the poor, she did something about it herself. I guess he’s trying to suggest that MacKillop was anti social security, but I’m not sure. It was weird to use such a moment to make a political statement, but that is Abbott in a nutshell really.

Today, the opposition only asked questions to Peter Garrett. There were seven of them, and not once did Garrett look troubled. For all but the last of his responses the opposition were mostly quiet.

Greg Hunt actually used one question to ask Garrett why he didn’t mention the details of the safety hotline in a radio interview he gave! Unbelievable.

Tony Abbott went the gutter route and asked his question on behalf of the four people who died while installing insulation – as though Garrett is responsible for their deaths. What utter bullshit. If Garrett is responsible, then so is every Health Minister, both Federal and State, for any death that occurs in public hospitals through malpractice – for I am sure they have been advised that malpractices do occur, and I am sure Health Ministers put pressure on hospitals to increase the numbers of surgeries done, the numbers of patients seen etc etc.

It wasn’t surprising that QT led to a censure motion. This allowed Abbott to go completely off the deep end and say:

"The minister didn't kill them but he didn't take the action that would have kept them alive."

How big of Abbott to suggest that Garrett isn’t guilty of murder. Abbott as usual then got all squeaky and ranty, threw in bizarre lines that made little sense, such as: “The Minister is in electrocution denial”. And he ended by appealing to Garrett’s morals and conscience saying:

“If he had a shred of the conscience he used to display in his former life, [he would resign].”

You know when the opposition refer to Midnight Oil, they’re struggling to make a meaningful case – but they know it plays well to the media.

Garrett’s response was cogent, calm and reasoned. It’ll no doubt get no positive coverage in the media – after all a 20 second rant is so much easier to use.

Greg Hunt then stepped up to the plate, looking for all the world like a Year 12 student ready to represent his school at the regional debating competition. He decided today was the day he’d show that Tony Abbott is his new mentor, and so went to an even more stupid level than Abbott.

He came out saying that this was the worst example of public policy failure in 20 years. I’m not sure what was so bad about things prior to 1990, but Hunt seemed pretty keen on the 20 year mark as he said it a couple times. He also decided to name the four men who had died, once again suggesting Garrett was responsible for their deaths.

You see according to the Liberal Party, the Government should be not only putting in safety measures stricter than were actually in place prior to the scheme commencing (which they did) , but that it should also be watching every single company in the insulation industry every day – because the free-enterprise Liberal Party just suddenly loves Governments interfering with small business (except they are against unfair dismissal laws because small business know when to sack someone, they just don’t know how to follow safety guidelines… come back to me when you understand that logic).

Hunt even suggested this was the worst case of public mismanagement that would be seen in this country for 100 years. This I guess means he is predicting no future Liberal Party Government will follow America into a war based on nothing but dodgy intelligence reports and a desire to look tough.

After Hunt sat down, Anthony Albanese got up to deliver a pretty bizarre rant about all things Abbott.

And that was it.

Cue the media to let fly with “Garrett under pressure”, or stories that Rudd won’t sack him because it’s an election year, or “Garrett failed to read report”, or “Abbott savages Garrett” (yep savaged with a lettuce leaf). As Bernard Keane wrote in an excellent piece last week, Peter Garrett and the Perpetual Present of Politics (a must read for all):

You’d think press gallery journalists would have a clue about how bureaucracies in Canberra work, but no.

Good points - you are, as usual, right in your analysis of the weak argument for Garrett's resignation. However, I disagree that the opposition were weak in QT today - really, they can't have expected to break PG, they would have known he would have spent the weekend practising answers, and ultimately hadn't really done much wrong. However, by aiming every question at him, and calling for his resignation, they made that the only possible story for journos to lead with - nothing else happened today, oppn. Calling for PG's head is the only story. And then most people's only perception of the story is just that. And the assumption that he must have done something, otherwise why would he be on the news?