Score one for the ignorant and for politics

Well Garrett has been demoted. Despite no one in the media or the opposition actually being able to explain just exactly with any level of intelligence what he did wrong, he was deemed to have “bungled”. 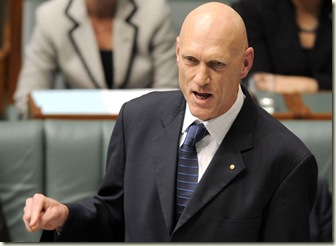 The media wrote the stories before the evidence came out, and when the evidence did emerge, they ignored it and kept writing the same drivel.

Only a few in the Canberra Press Gallery have displayed any sense on the issue. The one who has been most on top of the actual issue has been Bernard Keane of Crikey. This isn’t surprising as he would likely be the only one in the Press Gallery who has actually written a risk assessment, let alone read one (I’d wager half of them still haven’t read one yet – and a good 90 percent haven’t understood what they did read).

Keane has written a perfect summation of the issue:

Despite (contrary to the claims of the mainstream media) overseeing the insulation program perfectly competently, Garrett lost control of the politics as the Opposition homed in on him, and while he was able to fend off demands for his sacking this week, Rudd must have had grave concerns about his political effectiveness as the face of both the new energy efficiency program and the Government’s efforts to placate business and workers.  Garrett has also suffered for having no power base or substantial factional support within the ALP.

Garrett wasn’t demoted because he did anything wrong. No one has been able to point to anything except a vague “oh but he should have done something – say more inspectors” blah. The program introduced a national safety standard that didn’t exist before, and which was more strict than which previously existed in any state; he responded to any risks that were highlighted by changing the guidelines as better advice emerged – here is the Master Electricians Association in February after Garrett banned foil insulation from the scheme:

Master Electricians Australia today welcomed the announcement by Environment Minister Peter Garrett that the Federal Government would fund safety inspections on all houses fitted with foil insulation under the Home Insulation Program.

Master Electricians CEO Malcolm Richards also thanked Mr Garrett for his commitment that the Commonwealth would fix any safety problems identified by the inspections, and pursue the installers for the costs of repairs.

“This decision by the Government today will lift a major burden from the minds of thousands of home owners across Australia,” Mr Richards said.
“More importantly, it will also cut the risk of further electrical deaths associated with the insulation scheme.

“This is a very good outcome for installers, home owners and any tradespeople who may need to access the roof spaces of these houses in the future.”
Mr Richards said Master Electricians continued to endorse the Home Insulation Program, and believed it had the potential to deliver significant energy savings across Australia.

“This scheme was designed to create employment, and it succeeded in bringing a large number of new players into the insulation market.

“Unfortunately, we have witness some terrible tragedies as a result of inexperience and poor safety standards on work sites.

“Since this issue came to light last year, the Government has listened to the concerns raised by Master Electricians and demonstrated a willingness to act to improve safety.

“Today’s announcement is a continuation of that cooperation, and Master Electricians stands ready to work with the Government to ensure the safety inspections are completed quickly.”

Yep, he really dropped the ball – he demonstrated a willingness to act to improve safety. What a complete idiot.

The economic impact of the scheme helped Australia survive the global financial crisis AND the number of house fires linked to insulations massively decreased in real terms since the introduction of the scheme.

But that’s all irrelevant, because the media has swallowed in one gulp the media releases and pronouncements of the Liberal Party. For example today in the Senate Committee it was “revealed” that Rudd did not ask for a briefing after the deaths of the workers. This was reported breathlessly on the ABC:

The journalist in question obviously gave no thought as to why the hell would the Prime Minister of the country be wanting a briefing on an industrial death. He’s the Prime Minister, not some freaking work supervisor! It was revealed to the committee that Garrett had received briefings on the death – and that is as it should be – he was the responsible minister. But Rudd? Geez, apparently now he is supposed to micro-manage everything that happens in the nation; and here I thought the media was criticising him for being too hands-on. Sigh.

And what would Rudd’s department brief him on anyway? They weren’t running the program, they were just co-ordinating the whole of Government issues. What would they be able to say? The deaths had yet to be the subject of a coronial hearing, so they wouldn’t be able to advise what caused the deaths nor who was responsible (if anyone). Here’s my bet as well: when the coronial hearings are held, and no mention is made of Garrett being at all responsible or liable (as Abbott would have it of industrial manslaughter for God’s sake), the media will bury it. It will be too late for Garrett anyway. Oh well. Not news anymore.

The odd thing is however that in reality the end situation is good for the government.  The Department of Environment had grown well beyond its traditional size and scope. Garrett either needed to lose some responsibility or get a junior Minster to help out. With the ETS on the back burner at the moment, Wong and Combet had only water to deal with, and thus were being underutilised. Combet is an absolute gun. Had he not entered politics so late in life (he’ll be 52 in April) he would be future PM material. I said late last year that Combet was my pick for “star performer of 2010”. I am even more sure of that prediction now. So the newly configured Ministerial responsibilities are actually better than they were (I’d give more to Combet, but that’ll have to wait till after the election).

One final thing. There has been some pure gutter shite suggested by some in the Opposition and media that Garrett was uncaring of the deaths of the four men, or about the house fires. What most would not realise is that Garrett’s mother died in a house fire in 1977 when he was 23. He actually was in the house at the time and tried unsuccessfully to reach her and drag her to safety. But here’s the thing – Garrett didn’t make mention of it once in the last three weeks; and neither did any of the Government (or if they did I certainly missed it, and I’d bet were told to shut it by Garrett). It would have been easy for him to play the sympathy card – the “I know how you feel” card, the “take it easy on me my mother died in a house fire” card. In fact I wouldn't be surprised if he was being advised by some in Government to play the card. He didn’t. And that is to his absolute credit.

I don’t know how many other Ministers and Shadow Ministers would have tried to use her death for sympathy were they in his spot – my guess is a hell of a lot.

Garrett was the victim of politics – and yes that is the name of the game, but for mine, he has no reason to feel ashamed.

Those who should feel ashamed? All those who wrote joke headlines with Midnight Oil lyrics such as “Who’s gonna save me?” and “Who do you blame when the roofs are burning” (both from The Australian) while the articles themselves were full of overwrought righteous indignation over the deaths of the  four men. Hypocrites.

Speaking about the ignorant in politics, you only had to look at george Brandis tonight on Lateline to see just how ignorant Tony Abbott wants the Opposition to be. It was the height of rudeness to see and hear Brandis chanting in the background, whenever Craig Emerson was trying to speak, "Blah, blah, blah!" Typical Private Schoolboy tactics from a grown man who should know the meaning of the word 'decorum', but only appears to know about viciousness.

As a previous Yank of 70 years, I thought I was plenty used to absolutely unfair politiking, and an idiotic self-serving media. But this one kind of took the cake for me.