Flick of the Week: “Sometimes I sing and dance around the house in my underwear”.

This week’s Flick of the Week takes us with Sigourney Weaver in Aliens to her role as Wall Street bitch Katharine Parker in the Mike Nichols’ romantic comedy, Working Girl. 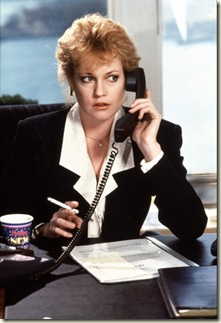 You could make a good case that Working Girl is the ultimate 80s film. It has Harrison Ford who was pretty much the biggest star in the world at the time, it has shoulder pads, it is about making money on Wall Street, it has a big theme song (Carly Simon’s “Let the Rivers Run”, which won the Oscar), it is about sisters doing it for themselves, and it has a number of actors at the start of their careers – Alec Baldwin, Kevin Spacey, David Duchovny, Oliver Platt. It is also the first and last movie after which people would think Melanie Griffith could become a huge star.

The story of a secretary from Staten Island (Griffith) who tries to move up in the world by pretending to be a  high powered executive is about as Capraeque as you could get in the “greed is good decade”. It is also an unthinkable storyline to contemplate now. Oliver Stone is bringing out a sequel to Wall Street, but there is no way in hell you could do a sequel to this film. A romcom about investment bankers? A love story about people who buy and sell companies and are into leverages and derivatives and what not? Inconceivable.

Could you imagine the tag line? “A love story about two people who helped bring about the Global Financial Crisis”.

But in the 1980s money was god, and if you were going to succeed, you had to succeed in New York in the business world. It was a time before the irony of American Psycho and Patrick Bateman working in “murders and executions”. In the world of Working Girl, investment bankers do good deeds – helping a family business to be bought out by a bigger company in a way in which ensures everyone is happy. Yep it’s all make believe.

But it is fun. Sigourney Weaver is a delight playing uber-bitch Katherine (when asked why she thinks banker Jack Trainer will marry her, she replies “We're in the same city now, I've indicated that I'm receptive to an offer, I've cleared the month of June... and I am, after all, me.”). Harrison Ford as Trainer pretty much sets a template that George Clooney has copied for the last decade. Alec Baldwin is perfect as the sleazy boyfriend (when caught naked having sex with another women - “It’s not what it looks like… ok it is what it looks like, but I can explain!”), and Joan Cusak gets the best lines and delivers them with relish - “Can I get you anything, coffee? Tea? Me?). The script is so nicely paced, with such good dialogue, that it is hard to believe the screenwriter, Kevin Wade, would go on to write such absolute stinkers like Junior, Meet Joe Black and Maid in Manhattan (and he also created the short lived Cashmere Mafia).

But when watching the film now, apart from the power dressing fashions, what strikes the viewer is that Melanie Griffith is actually half decent. OK she was probably playing the limit of her range, but the role fit her perfectly and when she says she has “a head for business and a bod for sin” it’s hard to disagree. Of course she, like everything else at the end of the 1980s, lost it all. Her role in Bonfire of the Vanities only two years later is now remembered more for the fact you can see the changes in her breast size during the movie due to her having a boob job half way through filming.

It is also good to see Harrison Ford at work in his prime. Given his last few outings it is easy to forget just how big, and how good he was. Here’s his list of movies in the 1980s:

Now that is a good run – two great franchises, one of the most influential sci-fi films of all time, Peter Weir’s first Hollywood film, a rather poorly paced thriller by Roman Polanski, and an excellent romcom – take away these films and the 1980s is markedly different. Sure his acting style is more of the “invisible school of acting” – he doesn’t really go in for the method acting style, and he has only gained one Oscar nomination, but film in film out he kept turning in quality work, and in Han Solo and Indiana Jones he played two of the greatest film characters of all time (and made George Lucas and Stephen Spielberg very, very rich).

Should you rush out and buy the DVD now? Well not unless you saw it in a bargain bin (which I’d suggest is where it would spend most of its time). While it is in no way great cinema, it is a great time capsule of how movies were made in the 1980s and how success was viewed at that time – it’s also just interesting to see a film set when women all seemed to work as secretaries (and were called that), it seems so antiquated now. It is an excellent time capsule of the 80s, and it remains a good couple of hours of fun. 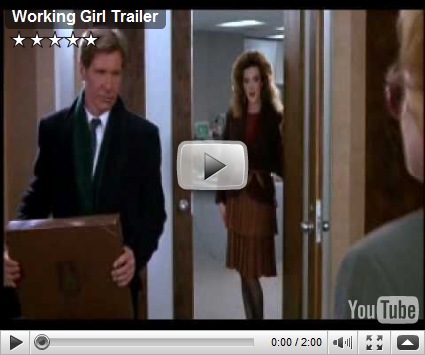 Here as well is the video for “Let the Rivers Run” which is another nice time capsule of videos in the 80s that were on soundtracks – the video is a virtual trailer for the film, and it also shows that Carly Simon has an incredibly wide mouth. 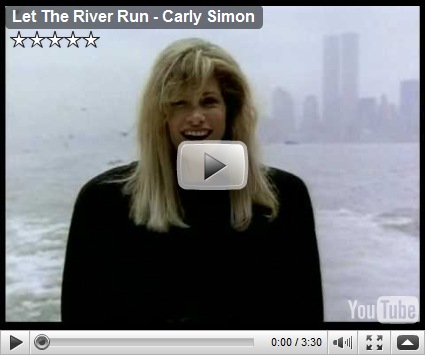 Wow.....She does have big mouth