On the QT: Dumb and Dumber meets Caddyshack 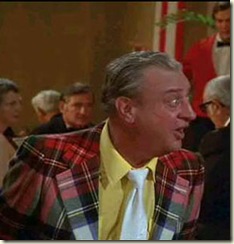 It would be nice to report that today in Question Time the heights of wit heretofore only reached by Oscar Wilde were attained. Alas no; it was more Rodney Dangerfield in action. Still funny, but perhaps not the level of maturity one would hope from our members of parliament – that is unless one regularly watched parliament and thus realised the place is essentially a school ground.

The topic for the opposition was still the insulation scheme; however they have officially given up trying to get Garrett’s head. They tried for a weeks or so – not very well, mind – and they had bugger all to work with once the Minter Ellison report was shown to be a damp squib rather than a smoking gun. Today they asked not one question of Peter Garrett. Not one. If the Minter Ellison report actually did mean anything, they would have continued to hammer him till there was nothing left but the top of his skull sticking ever so slightly above the green carpet of the House of Reps. But as far as the report goes, there was no there there. Incidentally Possum over at Crikey wrote an excellent blog on the Report, in which he goes into more detail than I did. I highly recommend you read it.

The opposition instead focussed their “attack” on Rudd. The questions (mostly which came from back benchers – geez even Wilson Tuckey!) were all about poor insulation workers who have now lost their job because the insulation scheme has been closed. Yes once again the Liberals were caring about the jobs created in a scheme which they voted against and which they had said would not create one job.

So I ask you, in light of all that, do you think Rudd was troubled by any of these questions?

If you answered, “not unless hell has entered a mini ice age”, give yourself a chocolate frog.

Hunt and Abbott did try a nice one-two punch where Hunt asked Rudd what part his Department had in the implementation of the insulation scheme, and then Abbott referred to a meeting between industry stakeholders and Rudd’s Department a year ago which apparently raised safety concerns. Abbott wanted to know when Rudd was made aware of the meeting. Rudd not surprisingly didn't know, and said it didn’t matter because he stood by all the risk minimisation strategies implemented by Garrett.

And that was as close as it got to Rudd having to block a delivery – the rest he was scoring runs – especially as he was able to use the questions to announce new measures of support for the industry in the transition to the new scheme. The last few questions from Abbott put emphasis on the fact that Rudd had “accepted personal responsibility” for the scheme. Unfortunately they were all pathetic: lacking any swing, movement off the pitch or pace. Rudd was scoring easy runs, and then bizarrely Abbott moved another censure motion.

There was a time censure motions meant something; there was time they were done to catch the Minister on the hop, to pretty much deliver the last rites. Since the last election however the Libs just use them when they have seemingly run out of questions. Abbott and Julie Bishop were their usual ranty and shrill selves. I suspect the censure was only moved because Bishop hadn’t said anything for a while and she the tactics committee give her a moment in the sun.

Rudd by contrast was calm, and used the occasion to outline all the new measures that were being brought in. By the time he finished you could be forgiven for thinking he was responding to a Dorothy Dixer, not a censure motion.

Thankfully Question Time was filled with some real Dorothy Dixers which allowed the government to have some fun at the opposition's expense. There was Jenny Macklin  making the most of the leak in today’s Sydney Morning Herald that Abbott was considering making it tougher to get the dole and disability pensions and also that “all welfare-dependent families with children should have half their income held back for food and essentials”. The story was by Lenore Taylor – previously one of the very few sensible journalists working for The Australian (hers is a huge loss for The Oz). Later in the day it was suggested by Vexnews that the story was leaked to Taylor by Malcolm Turnbull. True or not, it does highlight that Turnbull is not expected to go quietly.

The most fun was had by Nicola Roxon. Yesterday she had noted that one of the great schemes of Tony Abbott to help fix the doctors’ shortage was to come up with a lot of golf balls with “Doctor Vacancy” written on them. Yesterday at the end of Question Time, Abbott had tried to actually suggest the golf balls were a Rudd Government initiative, except Roxon quickly explained that they were produced in May 2007, which unfortunately for Tony, was when he was Minster for Health.

Today Roxon produced the balls and (rather like Gillard and the WorkChoices mouse pads) announced that there were 2,700 of the balls in storage, and she wanted to give them away. She referred to Peter Dutton, the Shadow Minister for Health, and said “I note the member for Dixon is a golf fan and I am prepared to offer some balls if he wants some”.

Yes it was a bit schoolyard, and it’s really only something a female can get away with saying. But it got a huge laugh – especially as Dutton is the kind of sook who a good number on both sides probably don’t mind having a snigger about.

She did actually give a ball to Dutton who was holding it while interjecting to Warren Snowden as he answered a Dorothy Dix. Snowden proceeded to tell him to just take hold of Tony’s balls. Which was a tad less funny, and Chris Pyne quickly got up to complain to the Speaker, because if anyone was going to hold Tony’s balls it would be … err no.. he asked that it be withdrawn – the statement, not Tony’s b… oh look let’s just move on shall we?

We also got to see Julia Gillard, fresh off a very impressive performance at the National Press Club, absolutely nail Abbott over the Liberal’s voting against the National Youth Allowance – in defiance of pretty much everybody who is anybody in the education sector. At her Press Club speech she has also announced that every school student will be getting an ID number to allow the system to track them if they move schools etc.  Abbott immediately responded that he thought people’s names were good enough to track people, which makes me wonder why as Health Minister he didn’t scrap Medicare numbers. Perhaps he was advised that quite often people have the same name which makes it all rather confusing (and also hell on a database). But that’s Tony: all talk, no thought.

The other bit of fun to be had on the Government's side was Wayne Swan thanks to (guess who) Barnaby Joyce. At the Parliamentary doors this morning he was talking about debt, unfortunately when asked if he was talking gross or net debt he said:

Which, lets be kind, is about as odd an answer as you could give. Oh for the days when John Kerin resigned as Treasurer after stuffing up the acronym GOS (Gross Operating Surplus) in a press conference. Now, well if you’re Barnaby you get away with any old guff. Swan had a lot of laughs – the biggest coming when he said that problem is when Joyce “speaks many people think he knows what he is talking about”. The roars of laughter from the Government benches suggested that Swan may be over stating the case when he said “many people”. Swan then pointed out the problem was that Joe Hockey didn’t know what Joyce was on about either, and it was a case of the two of them being “Dumb and Dumber”.

Now it’s a pretty easy line, but you just know there is one person above all others who hates the appointment of Joyce to Shadow Finance, and that is Hockey. Hockey, as has been the case all week, had no questions, and was reduced to tweeting questions. Poor bugger. The thing is with his physique he is more Rodney Dangerfield than Jim Carrey, and at the moment he would also be very familiar with Dangerfield’s signature line: “I don’t get no respect, no respect at all”.

Great post and terrific site. Will spread the word.

Keep up the good work, Grog. Much appreciated.