Flick of the Week: “It’ll be dark and weird and funny. And with a stroke”

This week’s Flick of the Week takes us with Tim Robbins from his break out role as minor league pitcher Nuke LaLoosh in Bull Durham to his role as Hollywood exec, Griffin Mill, in Robert Altman’s brilliant Hollywood satire, The Player. 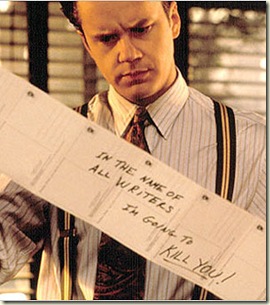 Altman was the stereotypical “maverick” – his films were not box office by-the-numbers jobs, they messed around with conventions, he had his own style – an auteur if you will. He made some great films in the 1970s that were unlike anything his contemporaries like Scorsese, Spielberg, and Coppola such as M.A.S.H. and Nashville. The thing is those directors really weren't his contemporaries – he was a good 20 years older than them all. The other thing of course is while he made some very good films he also made a heap of dross. The 1980s especially were horrible – Popeye, Streamers, Secret Honor, and O.C. and Stiggs are not any three films that are going to be found on any Best of the Decade list. By 1990 it seemed his career was over. And then out came The Player, and boom! he was suddenly in demand again. Actors fell over themselves to be in his films, and in 2006 he won an honorary Oscar.

The Player is based (rather loosely) on Michael Tolkin’s novel of the same name. Tolkin did the screenplay but a fair bit of the dialogue that ended on the screen was improvised (which Tolkin himself acknowledged when he later published the screenplay). The novel concerns Hollywood studio exec Griffin Mill who is receiving threatening postcards from an unknown writer, whose idea for a film Griffin had knocked back. He suspects the postcard writer is David Kahane, and he arranges to run in to him at a screening of The Bicycle Thief at an arthouse theatre. After an argument Griffin kills Kahane. The rest of the film concerns whether he’ll get away with the murder, Griffin’s dealing with the sharks of Hollywood – especially rising (and rival) exec, Larry Levy, and the development of a film called Habeus Corpus.

The film involved an immense number of cameos by Hollywood stars playing themselves – imdb lists 65, though not all had speaking roles. The number is an important aspect of the film, because while The Player is a pretty cutting satire of Hollywood it is in no way a brave satire. The studio execs, money men and even writers get slapped with scorn and contempt, but the one group exempted from the satire are the actors. Julia Roberts and Bruce Willis were able to perform self-deprecating roles that let everyone know that they were in on the joke. And all the 63 others were able to get in on the act – Burt Reynolds is seen talking about the “asshole” studio execs, as though they are the ones at fault for the decline in quality of Hollywood films – ignoring of course that no one forced him to make crap such as Cannonball 2 or Smokey and the Bandit 3 – or perhaps he would have us believe they were high examples of motion picture art that were just destroyed by studio interference….

You see Altman has always been “an actors director”. He has big ensemble casts where he lets the camera roll while the thesps do their stuff. Actors love him because he just lets them go. Altman is no great friend of writers – Peter Biskand writes in Easy Riders, Raging Bulls how after M.A.S.H. became a huge hit, Altman began talking about how much of the film was improvised, and essentially suggested he had discarded the script by Ring Lardner Jr. In this film some writers (those “big enough”) do get included, but the struggling unproduced writers? Nothing but condescension. And so Altman attacks the weak (writers, who have no power in Hollywood) and the universally despised (the studio execs), and protects the equally culpable – the actors.

That said it is a marvellous film. Tim Robbins is wonderfully amoral as Griffin, Great Scaachi is perfectly otherworldly as the girlfriend of Kahane, June Gudmundsdottir (she’s from Iceland). The supporting cast of Whoopi Goldberg as the detective on the case, Fred Ward as the studio head of security and Lyle Lovitt as the bizarre cop working with Whoopi are all spot on. 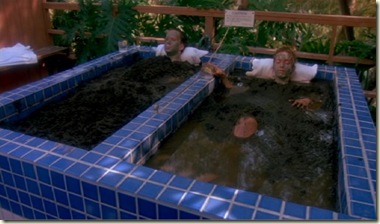 While the script may play it somewhat safe, the things it does attack are attacked perfectly: the facile and pretentious side of Hollywood are perfect: Griffin to a waiter: “This is a red wine glass. Can I have my water in a water glass?”(and Griffin and June relax in a mud bath); the complete lack of the artistic view from the studio execs – Larry Levy suggests getting rid of the writers, that they could write films themselves by just getting stories from the newspaper; and the shallowness of everyone – every producer or writer who makes a pitch suggests they have a personal relationship with Julia Roberts or Bruce Willis, a studio exec refers to a party attended by “a hundred of my close personal friends”.

The film also features Altman’s brilliant direction. The guy loves the long take, he loves just letting the camera move and let the actors do their stuff. The opening 8 minute tracking shot justifiably became famous upon the film’s release – it is a wonderful postmodern piece of filming.

And so while it is not the best satire of Hollywood (Sunset Bldv, Mulholland Dr among a number of others come in front) it remains a very good film. Very good because it perfectly captures the end of the greed is good period of the 80s early 90s (the film is essentially The Bonfire of the Vanities goes to Hollywood) and also because it brought Altman back into the fold, whereupon he would go on to make his usual interesting mix of excellence and dross. Say what you like about Altman, he was never boring.

The Player is him at his near best, and well worth the view if you haven’t seen it.

Below is the opening scene. 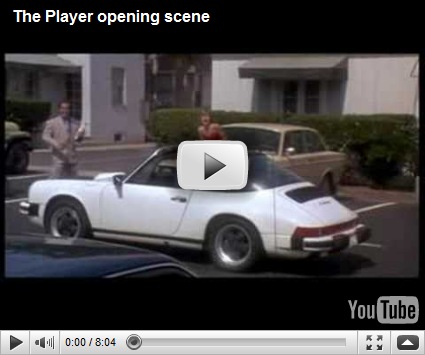 That Graduate sequel sounds awesome. I hope someone makes it some day.

It couldn't be worse than "Rumour has it..."