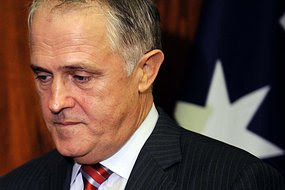 Last Wednesday I said that Malcolm Turnbull had had the worst seven days by any opposition leader in Australian political history. Today came statistical proof that I was right.

This morning out came three polls - Galaxy, Nielson and Newspoll. It didn't matter which one you read - they were all the same and they were all very, very bad for Malcolm Turnbull. In Newspoll his dissatisfaction rating rose 7% to a whopping 58%. Over on Nielson it went up to 60%. His satisfaction rating in Newspoll fell from a career best 44% to a career worst 25%. On Nielson it fell to 32%.

Nielson also asked who voters preferred as leader of the Liberal Party. Peter Costello, who has essentially retired from the game, got 37%; Joe Hockey, who doesn't want the job (yet), got 21%; Turnbull got 18%; Don't Know took in 14%; and Tony "People Skills" Abbott, 10% (it's compulsory by the way to now refer to Abbott as "People Skills").

It is not going too far into the realms of hyperbole to say things aren't good for the Liberal Party when its leader only has 4% more of the population wanting him to lead the party than "Don't Know".

The most Liberal-friendly paper is The Australian. It's banner headline this morning was:
Polling smashes Turnbull

In the story, one of the most Liberal-friendly journalists, Dennis Shanahan, wrote the following:

MALCOLM Turnbull's political career has been smashed in just one week, and senior Liberals believe there could be moves within the party to remove him as Opposition Leader within days or weeks.

Things got marginally better for Turnbull as the day went on, but I doubt these are the kinds of headlines he was dreaming about when Costello announced he was quitting only less than two weeks ago:

Why do they rule it out? Well, because they've got no one else:

Other senior MPs, asking for anonymity, backed Mr Abbott, saying no-one was happy with the poll or last week's events but that most of the party accepted Mr Turnbull would learn from his errors. They said there was an expectation Mr Turnbull, in only his second term in Parliament, could use a planned frontbench reshuffle to promote seasoned political operators including Mr Abbott. The MPs also said that the only person being mentioned as a serious alternative leader – Sydney MP Joe Hockey – was making clear to colleagues that Mr Turnbull should remain leader.

Always a good look when a senior MP will back the leader of the party only on the condition of anonymity!

But God bless the Liberal Party, they still have people like Christopher Pyne, fresh back from his trip to Israel, where he has seen his position as Leader of Opposition Business been completely blown to bits by Tony Abbott, come out today and say on radio that Kevin Rudd is "drunk with power". Even were it true, it's still better than Turnbull's performance of the last 10 days in which he pretty much has just seemed to be drunk.

Tony Abbott has kept up his defence of the leader (note to Malcolm, if you turn around and the only one there is Abbott, it's time to rethink your strategy). On AM this morning he restated his spiel that he has been trying for the last couple of days:

TONY ABBOTT: Sabra, look we had a very tough week last week and when you've had a tough week you tend to get bad polls. Let's not forget that the Labor Party threw everything but the kitchen sink at Malcolm last week and I think that the smear campaign that they waged has had an impact.

But just as Malcolm didn't flinch last week, it's important that the party doesn't flinch this week. We have a good leader, he's going to lead us through to the next election and we've got to get behind him.

Amazing - Turnbull essentially calls Rudd and Swan corrupt on the basis of a fake email, and yet it's the ALP that has been guilty of smearing! And if Turnbull ain't flinching, then maybe someone in the Liberal Party should consider asking him why not?

Here's the Liberal Party's strategy to overcome 60% of the population thinking Turnbull is doing a lousy job and having only 47% describing him as "trustworthy" :

SABRA LANE: How can he rebuild trust and respect with voters?

TONY ABBOTT: Well he rebuilds by doing what oppositions always do, which is pointing out the flaws and the weaknesses in the government. And a government which was debt free a year ago has, in the course of the last 12 months, been borrowing $2 billion a week. Now that's real in a way that these polls are not.

So he will rebuild trust by trying to point out what is wrong with Rudd (whom 70% describe as trustworthy). Good luck with that.

The problem is that A 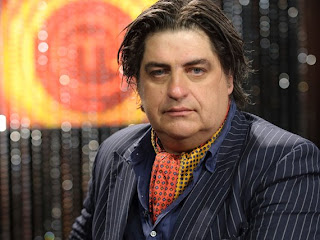 bbott and Pyne and others who think Turnbull will learn from this and bounce back are thinking this is like a bad loss in a football match. It's not. This poll is like a horror restaurant review. If every newspaper in the country and all the TV stations run a review stating that there are dead rats in a restaurant's kitchen; well it doesn't matter how much you clean, people are not going to forget that review. It will take a very long time before you're going to take your family out to dine there. (And by the time people do, new management will be in place.)

When you go to a restaurant you're trusting that things are clean; it is the only thing that will stop you from going in the door. You could tell all of your friends that the restaurant does a lousy fish of the day, and yet some will still go (they'll just try the steak). But tell anyone the kitchen was filthy and the toilets dirty, well that'd pretty much be enough to stop them all from ever eating there - even years later when someone at work suggests going there for Christmas lunch, they'll say "Oh, I've heard bad things..."

Turbull is that bad restaurant. He can try and gussy up the dining room all he likes, he can rearrange the decor (apparently he's planning to reshuffle the front bench), but on Election Day people will be thinking "Oh, I've heard bad things...".

People hope for a good meal, just like they hope for a good Government. But they expect the restaurant to be hygienic - no point making a fancy degustation menu if 60% of your diners get salmonella. Similarly, changing Governments requires first that voters believe the opposition leader will keep the Governmental kitchen clean. With Turnbull the reviews are coming in - he likes trying to serve up the Michelin 3 star food, but his kitchen would make a roadhouse restaurant look like a hospital.

People aren't going to forget that, and it's going to take more than new tablecloths to change their minds. The Liberal Party should start thinking about cutting its losses and change the management.
Posted by Greg Jericho at 6:13 PM

Speaking of masterchef, did you see the roasted pig's head?? Wow. I have never wanted to eat the cheek of any animal as much as I do tonight.