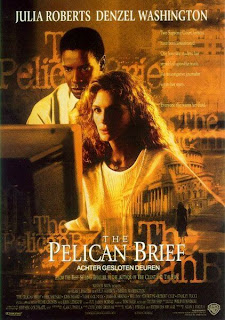 Well what a day in parliament. With AFP searches of Grech's house, links to former advisors of Turnbull; new news it seemed every other minute. It was like a John Grisham novel. I half expected Julia Roberts and Denzel Washington to come running into the House screaming "We've got the email!!!"

I'm not even going to try and bother recap everything that happened. But essentially this is it - the Opposition tried to sort of censure Wayne Swan (but not really), and the Government responded by moving a censure motion against Turnbull. Then followed about 3 hours of debate.
My comment is only this - Rudd and the entire Government were in a great mood and were lining up to speak (I'm betting Julia Gillard must be cursing herself for being in Israel this week of all weeks). The Liberals on the other hand ran out of speakers - Turnbull had to speak twice! In fact things got so bad they let Bronwyn Bishop speak! That says more than anything about how they were travelling. The funniest thing was Joe Hockey repeating the news from the ABC that an email had been found by the AFP, and suggesting that the news destroyed Rudd's case. Hockey however failed to realise the AFP had found the email was a fake, which actually destroyed his own case.
Turnbull and the Liberals are now running a million miles an hours away from the email on which they have based their entire attack on Rudd and Swan since 4 June. Turnbull at one point made the sarcastic point towards the Government being so in shock that he had called for Rudd's resignation, saying "I must be the first opposition leader ever to call for the PM to resign!"
Well Malcolm, I think you may be the first to do so on the basis of a fraudulent document....
How confident were the Government? At one point Anthony Albanese put out a call to Peter Costello (who is also in Israel) saying "the nominations for the seat of Higgins close on June 30 - it's not too late to reconsider!"
Turnbull can bluster all he likes, but there is no walking away from the fact everything he has said about Grant, Ozcar and Rudd and Swan rests on the email. It is now proved to be completely fake - the source is still to be discovered. Turnbull's case is in tatters. He can't now pretend the email was of no importance. And if (a big if, admittedly) the source of the email is found to have any connection to the Liberal Party, Turnbull will have to resign, and the Liberal Party will be out of power for a decade.
Today was one of the biggest days in parliament for many, many a year. It was won by the ALP; but it remains to be seen just what the reward will be.
Posted by Greg Jericho at 5:11 PM

Isn't it great to have Australian politics back? I've been loving every minute of this and it just keeps getting better.

Now we're at a point with the opposition in disarray and the government confidently swaggering through QT, and there have been potential double dissolution triggers piling up over the last few months. Depending on how Utegate concludes I wouldn't be surprised if there's an election called by the end of this year.