Back on April 30 I dealt with the Best Picture nominees for 1998. I said I would get around to dealing with the other categories "next week". Errr...Whoops.

Oh, well let us get on to the categories:

Should have won: Jim Carrey (The Truman Show)

My God what a terrible selection. Benigni perhaps is the worst actor to have ever won the Best Actor award - and look who he beat as well! Nolte, Norton, McKellen, Hanks. That's as strong a field as you could ask for. Out of those four, Norton would probably get my vote, even though to be honest, I think he is a much over-rated actor, and his performance even more over-rated. His performance as a a neo-Nazi is not a patch on the work done by Russell Crowe years earlier in Romper Stomper.

But there was one person missing who gave the best performance of the year - another comedian who was moving over to the dramatic side of cinema. Jim Carrey in Peter Weir's The Truman Show. The film bizarrely didn't even get a nomination for Best Picture (I made it runner-up, but to be honest part of me thinks it should have won the gong). I'm not sure why it was so badly snubbed by the Academy, but it was certainly the most prescient film of the year.

Actually I think there are some flaws with the film - the premise is a bit too hard to believe - but there are none with Carrey's performance. This is course was not the first time Weir had taken a comedian and turned him into an actor. In 1989 he did the same thing with Robin Williams in Dead Poets Society. (Unfortunately both Williams and Carrey have gone on to be "serious actors" in films working with far less talented directors than Weir).

Carrey is charismatic as the eponymous Truman, but not too funny that you think he is the same guy from Ace Ventura or Dumb and Dumber. He is able display the sadness - the loneliness - required of the character without becoming mawkish. As the only person not aware that he is a living TV show, Carrey is not allowed to appear to be "fake acting" like the others around him - and throughout the film Carrey does indeed seem to be the only one who is real, just as is the case with Truman.

The film's success certainly is due to Weir's talent, and that of screenwriter Andrew Niccol (who would go on to write and direct Gattaca), but without Carrey's performance it would all be a joke.

Carrey of course is now stuck in a bit of a netherworld of not knowing if he is funny or serious. His work in The Eternal Sunshine of the Spotless Mind was excellent, but no one will want to ever see Number 23 again. Regardless of his career since this film, he certainly hit all the right notes, and he gets my vote.

Should have won: Cate Blanchette

The first thing I think when I look at this list is One True Thing?? What's that? I have absolutely no recollection of it.

Then I think, geez, they really stuffed up this one. 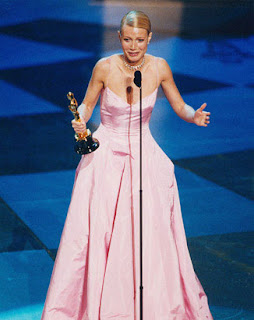 Sometimes the actress doesn't win the award, the role does. That was certainly the case here. William Goldman has argued that whoever played the role of Viola in Shakespeare in Love would have won Best Actress, and I agree completely. I mean think about it - she gets to play a man, she gets to be the first Juliet, and she gets to fall in love with Shakespeare and cure him of writer's block. Gwyneth actually didn't do a bad job at all (I like her performance -I think we mostly think of her horrible acceptance speech when we think of why she shouldn't have won the Oscar).

But there is absolutely no doubt that the performance by Blanchett that year was one for the ages. In the time since it has only grown in stature - let's be honest, the only reason there was a sequel is because everyone wanted to see her in the role again.

Blanchett is able to convey so many emtions, and such a growth of character over the course of the film. She goes from almost coy school girl to supreme ruler, and despite the change her performance is centred and logical. We believe her as Elizabeth in all her stages.

Unfortunately the film was directed by Shekhar Kapur, who is an absolute hack. The following scene is a great example of Blanchett's performance and Kapur's inability. Half of the time we see Blanchett from some bizarre angle looking down on her head, the other half we are peering at her through a crowd. It is as though Kapur arrived late to the set and had to sit in the back row.

Such angles happen throughout the film, and it is further tribute to Blanchett's performance that she was able to overcome such poor direction.

Should have won: Peter Weir

Firstly, let's get rid of Benigni. A disgrace really. Let's put in Steven Soderbergh for his fantastic work in Out of Sight.

It's fair to say Spielberg really wanted to win this one. And admittedly he does do some great work - the landing at Normandy, and the final battle are excellent; incredible, really. But he starts and ends with a mawkish piece of shite involving the old Private Ryan going to the graveyard. Plus he spends ages showing the set up of how important Ryan is - the whole letter office and then General Marshall reading the Abraham Lincoln letter, and so on. And the fact is, despite all of this set up, by the time we get to Ryan, we don't really give a damn about him anyway. Maybe there's some deeper meaning there, but I doubt it.

Terrence Malik is a brilliant director - and I actually think his battle scenes are at time more intense than those shot by Spielberg. But the whole is a bit all over the place, and so I can't reward him.

Now Peter Weir however, doesn't put a foot wrong in The Truman Show. The first person hired to direct the film was actually the screenwriter Andrew Niccol. He had never directed a film before, and he pretty much knew he wasn't going to end up being the director, and so he got a great deal struck whereby he was on a "pay or play" deal - ie they would pay him even if he didn't end up directing the film. And once the budget got over $80 million, there was no way a first time director was going to do it.

So the studio got Peter Weir. The first thing he did was to get Niccol to re-write the script (16 times apparently). If you read one of the early drafts you see it is a very different film - and has a much bleaker ending. Weir's involvement also got Carrey on board.

The best thing Weir did however was to makes use of a multitude of different camera angles to replicate the hidden camera aspect of Truman's life. He also replicates the look of a television show in the opening act, and also creates a sinisterness in Christoff's control room, when he could have easily gone for the look of a standard TV studi control room. Actually perhaps the best thing Weir did was bring out great performances from the entire cast - Carrey, Laura Linney, Ed Harris are just outstanding.

Weir has had a great career - he has been nominated for Best Director 4 times (he should have more - and I'm putting him down already for another nomination for his next film The Way Back). He deserves at least one win. This one, in a year of great work by some great directors, is only apt.
Posted by Greg Jericho at 6:30 PM