On Sunday night the Liberals put out a video with Malcolm Turnbull telling us all a scary story about the evils of government debt.

Apparently, according to Liberal insiders, Malcolm Turnbull filmed the ad "without a script" (yeah right, and Hollywood actors all do their own stunts).
The big omission is the total lack of any mention of there being a Global Recession.
You see in Malcolm world all of the Budget deficit is due to $14b worth of stimulus payments - not at all due to the $173b loss of revenue over the next 4 years.
We all knew this would be the Lib's strategy. Let's hope the public isn't too gullible. 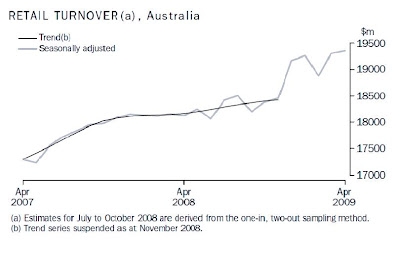 Incidentally some new retail figures came out today showing that the stimulus payments continue to hold up retail spending - exactly as they were intended. So that's more evidence that the stimulus payments worked.
If you want to argue against them, you now have to argue that the Government should have let retail spending go through the floor. To argue that they haven't worked is to live in an alternate reality.
Now I would love to go through Turnbull's video, but there's no point given the fine work been done by Bernard Keane over at Crikey. Have a read and enjoy. Also worth reading is Turnbull's interview with Barrie Cassidy on Insiders yesterday. He will need to come up with something a tad better if he wants to be taken seriously (either in an ad, or in the electorate):

MALCOLM TURNBULL: ... This is the biggest challenge we face, getting that debt under control. Because everything depends on it. How much money will we have to spend on the environment, on hospitals and schools, on roads, on anything, if we are saddled with over $300 billion of debt and rising? I mean those debt figures...
BARRIE CASSIDY: Yeah but your best estimate or Joe Hockey's best estimate is that your debt would be $275 billion. You're not really that far apart.
MALCOLM TURNBULL: No that's not true Barrie. Barrie you are, I'm sure inadvertently, just repeating Kevin Rudd's line...
BARRIE CASSIDY: No Joe Hockey said it would be $25 billion less.
MALCOLM TURNBULL: No he didn't, well I can tell you, I'll tell you exactly what he said. He was asked how much lower our debt would be and he said, well for a start it would be at least $25 billion lower, and then went on to describe a number of other factors. I mean the point is that had we...
I'll just break in here. This is the transcript from Sunrise of Joe Hockey and David Koch:
KOCH: How much debt would you support and how big a deficit would you support?
HOCKEY: Our deficit would be smaller.
KOCH: How much?
HOCKEY: Well considering, I’ll give you a figure as a starting point, at least $25bn smaller. Because, because you remember, they spent all that money and it’s still being spent. The $43bn in the stimulus earlier this year. We said we’d have less than half of that. So that’s automatically saving $25 billion in this year alone as a starting point.
So yeah he did say at least $25b smaller, but then he went on to say the $25b less was due to the Libs saying that wouldn't have spent the $43b stimulus. So pretty much the Liberal's policy is that they will reduce the Budget deficit by first building a time machine and then going back to January this year and not spending money. Good luck ever getting them to say what they will do now.
OK, back to Insiders:

BARRIE CASSIDY: Well then, let's get it accurately on the record then. How much less would it be?
MALCOLM TURNBULL: Well Barrie, it would be a lot less...
BARRIE CASSIDY: A lot less.
MALCOLM TURNBULL: And I will explain why.
BARRIE CASSIDY: No, no, if you could give us a very precise idea about how much less.
MALCOLM TURNBULL: Well Barrie, it isn't possible to provide, for us in Opposition any more than any other Opposition has done, to provide an alternate Budget down to every last dollar and cent. We don't have the resources to do that.
Bull, Malcolm. You can read the Budget papers and decide what you would cut; you can hire a economic firm to cost any spending policies. It's easy. What is hard is actually doing it. Turnbull doesn't want to do it, and won't do it until about 2 weeks before the next election.
Posted by Greg Jericho at 3:25 PM